by Jake Barrow
in Cricket, Rugby, and Multi-sports venues
on 16 Apr 2018

0 James and the Giant Pitch

Jake Barrow headed to Newtown, the largest town in Powys, but with a population hovering around 12,500. Surrounded by difficult to pronounce villages (unless you are Welsh), the town's cricket ground lies just ten miles from the border with England, where they play their cricket in the Shropshire Premier League. 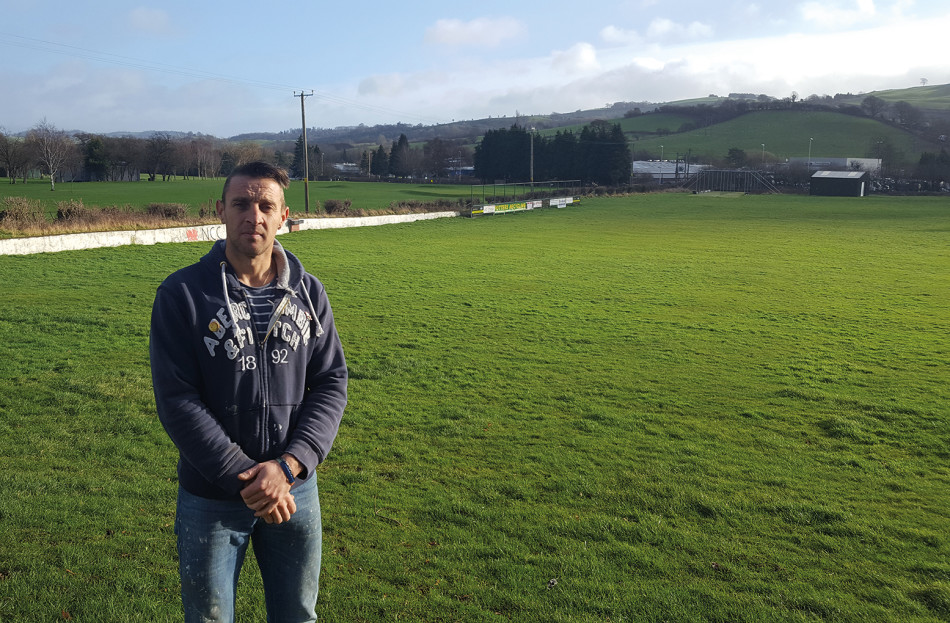 James 'Jamie' Smart is a reluctant cricketer, as well as a slightly reluctant groundsman, but nobly continues both due to his belief that he has a duty to his community.

The volunteer groundsman works at Newtown Cricket Club's 'The Recreation Ground', the club being a remote mid-Wales organisation with short funding and even shorter staffing.

"Most years we tend to find budget, but this year we've struggled a bit. We haven't had the budget at all when compared with previous years."

"It's just expensive running a cricket club. It's trying to get the expenses in the first place that's the problem. So, that's where it comes from."

"We don't get that many people coming to watch, so it's not exactly like we can charge them to watch. We wouldn't charge them anyway."

"We're also not generating any money through use of the clubhouse or anything like that, so our revenue is basically just coming from sponsors to take us through the season. At the moment, that's not covering the cricket club, because Premier League fees are very high."

"What this means is that, each year, something needs to be sacrificed to make up for the deficit, and this year it's going to be renovation of the square, by the looks of it."

Jamie works with the captains of the two cricket XIs, being handed the fixture list at the beginning of the season to help him plan the year around his work. 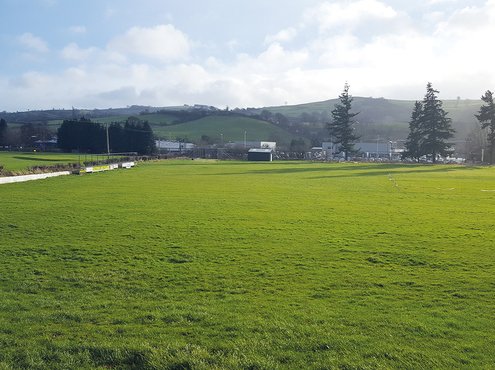 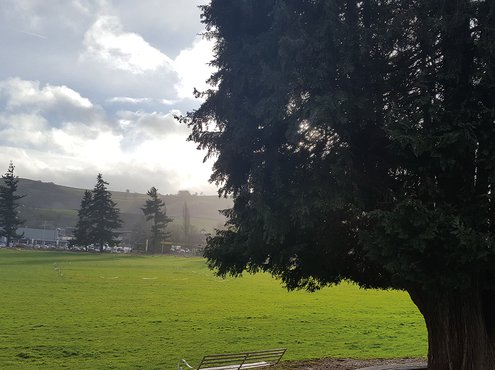 "They can then ask me about how they'd like the pitch to be handled for the year. For example, the 1st XI captain might say he wants an extra two pitches to be included, and I'll do that for him."

"That can sometimes knacker me up a bit as well. When we only have eight wickets to use on the square, and I've got to prepare to use one of them at any given time, it can be a pain towards the end of the season when you're suddenly running out of wickets."

The club also uses the pitch for international matches, recently including the Welsh National Cricket for People with Disabilities squad, perhaps up to eight times last season, and the Welsh National Under-11s, who played against Yorkshire's Under-11s.

Jamie took over from the previous volunteer groundsman when he was struggling to keep up with the necessary workload.

"I noticed he was struggling and offered to help him out, and he then started working more to help pay for his daughter's wedding. So, about four years ago, it just transitioned to being me basically."

"I get help now and then, but it's very rare. That was the first time I'd done this work. There's a fellow called Chris Wood. He is the ECB Pitches Consultant. He posted online about how to treat a square, how to mark out a pitch, how to repair foot-holes, the height of the cuts… and, basically, I had to watch a lot of YouTube videos to learn how to do the job."

"After that, it was a case of trying to get the machinery. We had a contractor for two years, who would come and do the outfield. Because his mower was a school mower, it was set for nearly two inches. So, it was never quick in the outfield." 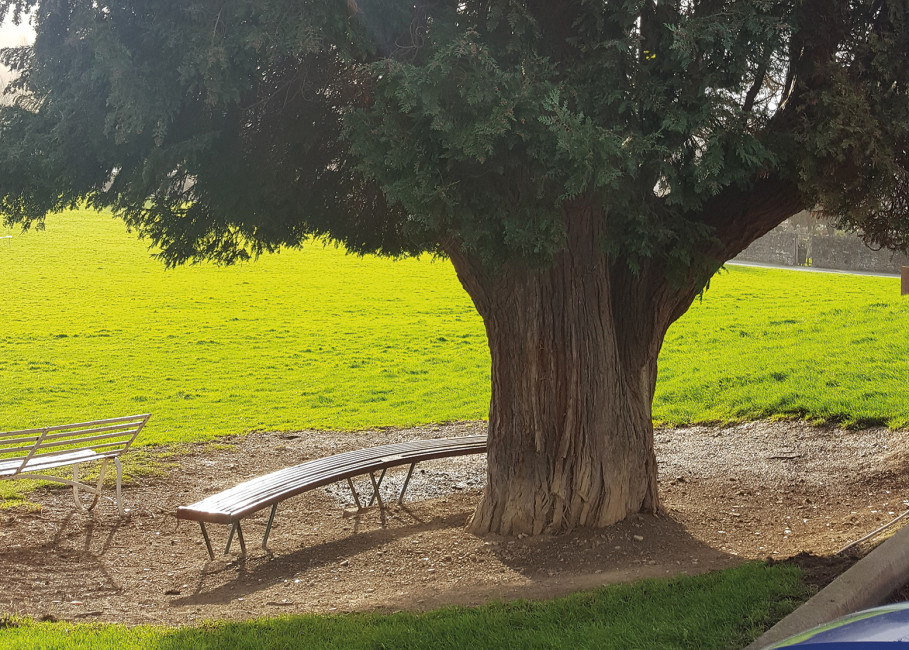 "We got a new outfield mower two years ago, and it cuts to length nicely. Everything's running like a dream out there now."

Jamie said he wouldn't call the job one of the priorities in his life, but that it is a very nice feeling to look down over a striped field with a short wicket at the end of a week of hard work.

He also mentioned that the opposite feeling can creep up during winter: "Look at it now," he said. "It has long grass, and sometimes people sneak on to play other sports on it. And, importantly, it takes up a lot of your time too."

"So that's when it gets hard. But yes; the positive comments are an amazing feeling. We've had umpires, in recent seasons, say they hadn't seen the surface looking as good it as has recently at any point in the last twenty years."

Every year, he has a conversation with the club's management in which he lays out his position: he will continue to do the work if he gets the help.

He appreciates that it is difficult to persuade people to turn up and manage a roller for half an hour whilst he does more taxing jobs, but pointed out that if people want to turn up on weekends to watch a game for free, it would be kind of them to do such favours.

This, he said, is the main reason he continues to do the work; out of a sense of duty: "At the end of the day, I think if I didn't turn up and do this, it wouldn't get done, and then nobody could play." 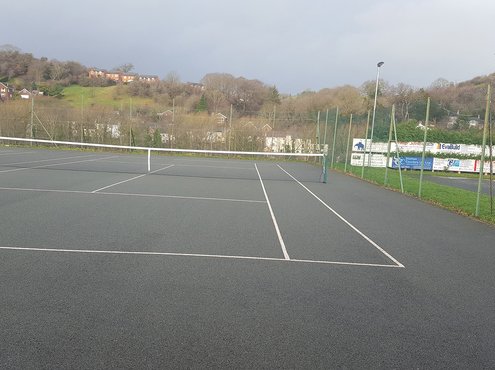 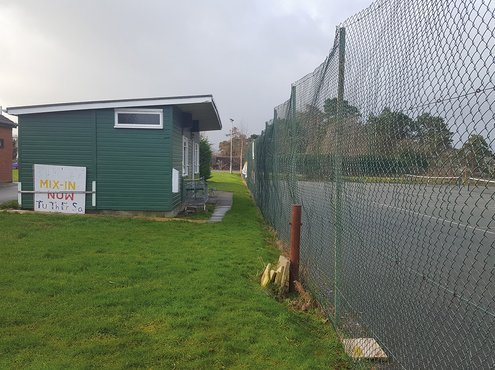 His day job is in carpentry and joinery. Like many, his interest in groundcare was somewhat sparked by his knowledge of care for the machinery involved.

Jamie opined about the age of the club: "Ours is one of the oldest clubs in the cricket league, I think. If I remember correctly, it was founded in 1885, so it's nearly 140 years old."

"I'm a Newtown boy born and bred, and it's always been in the format it currently is, for as long as I can remember seeing the place. And that's quite a long time, to be fair."

"The pitch hasn't been relaid in the time I've seen either. The bottom half doesn't seem to drain, because it's on a bit of a slope. The top runs away just fine, but then at the lower half, it sort of slopes back up again, and that part seems to hold a lot of water."

"It's OK in the height of summer, but other than that it can get a bit boggy and sodden underfoot due to the flow of the pitch."

"I don't know about the clay content, but it's certainly very stony, and I'm not sure it's the best quality turf down at the bottom there."

"If I've got to spike things out, I notice issues there. And, if I have to put the covers on, I can only get the pegs down to about six inches before there's a lot of resistance from stone. So, I'd say it's more stone-based than clay-based on the outfield."

"The Welsh Rugby Union came down a few months ago to do samples of the rugby pitches, although we don't take them from our side of the land. They said that they couldn't play on it, but they wouldn't give feedback as to why." 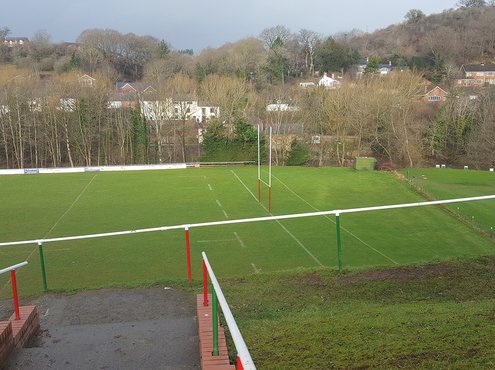 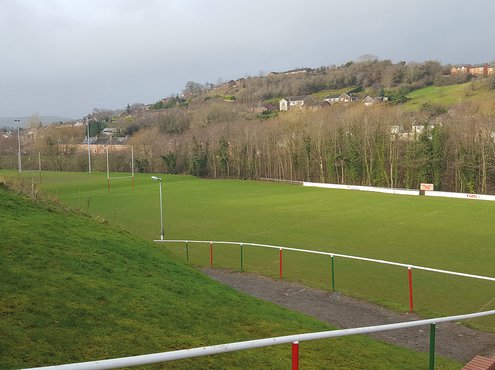 The pitch is 130 yards in one direction, and 110 yards in the other. This makes the playable area around 2.32 acres, which is a substantial amateur pitch.

Even with all this area to maintain, and the higher rainfall associated with the strip of land between mid-Wales and northwest-England, Jamie is proud of his ability to keep it playable.

"It used to be that the club would have seven-or-eight games rained off in a year, but I think it's been about two per season since I started."

"We have a rule with the weather; there is a mast just outside Newtown and, if we can't see the mast, we assume that there's a maximum of five minutes before the rain comes in."

"By the time we rush to get the covers on when that happens, the rain will have got to us, so we don't delay as soon as that mast disappears."

Facing that same issue are the groundsmen who maintain the rugby pitches and tennis courts at The Recreation Ground, but Jamie has more contact with the greenkeeper of the golf club which is adjacent to the cricket pitch.

"I see him daily when I'm down there. And we chat about the weather, mainly. It's a groundsman's thing, but it's also a Welsh thing."

"We'll talk about what's on its way, or what's just been. It's sad, I suppose, but it's your priority as a groundsman, and naturally that's what we end up talking about."

We spoke about Jamie's regimes, and he said he tries to get all work done on a Friday evening after work, just in time for a weekend of good cricket.

"Then, on Saturday morning, it'll just be a case of rolling the covers off, placing the stumps, sticking in the flags on the boundary rope, and maybe a quick roll. The Friday will usually consist of cutting the pitch, marking out, rolling the pitch."

He cuts with a Honda mower. "You can't go wrong with Honda," he said. "Our Honda engine for the square is brilliant. For the outfield, we use a Toro Reelmaster, which is another fantastic machine and I've never had any problems with it." 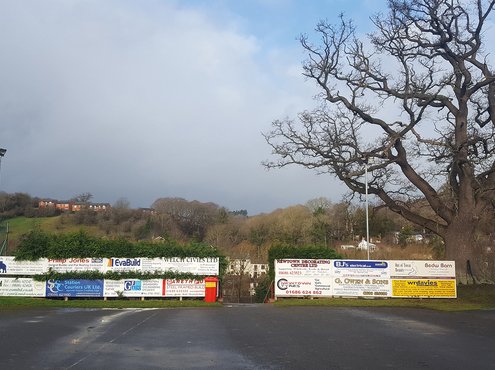 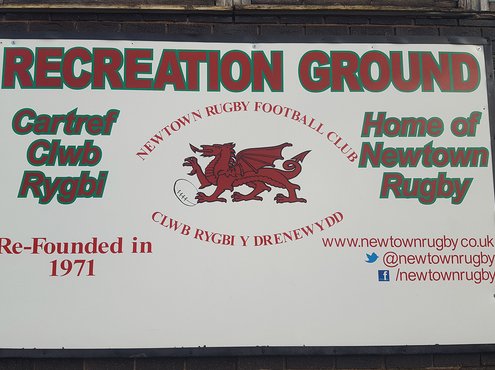 He said he always aims to make the pitch play well, rather than look good, because; "at the end of the day, you've come to watch a good game of cricket. You've not come to watch the pitch."

And he has made the pitch play better demonstrably. "I get a lot of comments from people saying they haven't seen this pitch better."

"One chap, who'd been watching cricket here for thirty years, said he was really surprised by the current state of the pitch, because it hadn't been up to that standard before."

"When I first started here, I asked people what a good score on a Newtown wicket would be. I was told that 120-140 would usually win them the match."

"It struck me that 120 is actually pretty bad for 50 overs. That's running at less than 2.5 runs per over, which is arguably not worth watching."

"So, in my first year, I told them that I'd set out to turn it into a 150-175 wicket. That notion was laughed away by a lot of people. They were sure it wasn't going to happen."

"I achieved that in the first season. Then, at the beginning of last year, I said I'd up it again to a 175-200 wicket. People still thought I was being daft."

"Anyway… we then bowled them out for about 100. So, it's a pitch I can be proud of, and I think people can see that I've done a good job."