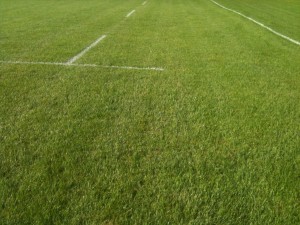 Since its foundation in 1855, Epsom College has been providing top class education, a tradition it proudly continues today for boys and girls aged 13-18.

While excellence in academic work is always a priority so are other areas of school life such as sport.

Jason has been quick to introduce practices such as regular aeration and a symbiotic fertilizer programme - with a two year timetable to become completely organic. He has also tended to leave more leaf on the sward, especially during the rugby season, and takes a little and often approach to cutting.

The main challenge he, and his team of four, face is the high usage of the sports turf - so to him fast sward recovery is an essential part of his turf management.

When it comes to seed, Jason has been consistent in choosing Barenbrug which he has used for many years.

"I first started using Barenbrug products 10 years ago when I was a green keeper and have always had great results," said Jason who buys his seed from Craig Brisley of Collier Turf Care who he says is always there to bounce ideas off about improving the sports surfaces.

"I use BAR EXTREME on the cricket squares as it establishes very, very quickly and is easy to look after. Once established it gives great coverage and recovers rapidly after a wicket has been used. There are never any crowning problem as there were with the rye grasses of old."

At Easter, Jason took the decision to overseed the rugby pitches with BAR 7 RPR at 25gr/m2, with the seed sown 10-15mm below the surface followed by a top dressing.

"I was a little anxious because of the hot dry spell we had a few weeks after the seed had reached second leaf," said Jason who has no irrigation facilities. "But it came through the heat much better than I could have hoped and now the sward is strong as we go into the winter."

Looking to the future Jason's priority is to increase sward density and establish a healthy root system and soil with which to give optimum grass growth. He is also introducing thatch eating microbes, along with beneficial fungi to the symbiotic fertiliser regime. His ultimate aim is to switch to an organic fertiliser programme once he can get the soil alive again.

"The College has high expectations going forward and I have to meet those needs by producing quality sports surfaces," said Jason. "I believe the changes I have implemented are an excellent foundation to build on. The better the quality of sports pitches I can produce then the higher the standard of play that can be achieved."