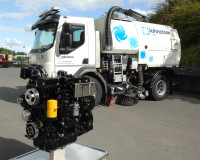 JCB has won a landmark deal to supply engines to the world's leading manufacturer of street cleansing equipment. The agreement - initially worth almost £3 million a year - has been secured with Johnston Sweepers, which supplies its equipment to the public sector, contractors, the rental market and airports through a network of 200 global dealers.

The contract is a significant milestone for JCB as it has been secured just weeks after the new Tier 4 Ecomax engine went into full production at JCB Power Systems in Foston, Derbyshire. JCB's engines already power more than 70% of the construction and agricultural machines JCB manufactures every year.

JCB won the order against fierce international competition. Production of the engines for Johnston Sweepers' equipment will begin in December. Johnston Sweepers will predominantly be supplied with JCB's 4.4 litre 55kW Ecomax engine, which is Tier 4 final ready, without the requirement for SCR systems or diesel exhaust fluid / Adblue™.

Founded in 1904 and with two British factories, Johnston Sweepers sell all over the world including UK, Western Europe, Australia, Russia and the USA. The JCB Ecomax engine will power a new range of truck mounted sweepers for the company, known as the V Range, which incorporates more than 1,000 design changes.

Graham Howlett, Johnston Sweepers' UK Sales Manager, said: "With the advanced technology of the latest JCB tier 4 compliant engine at the heart of the new sweeper range, we are maximising performance, payload, fuel consumption and water conservation and producing the most cost effective and practical city sweeper on the market.

"The JCB Ecomax engine is the cleanest and most efficient engine available, designed and built in Britain by JCB. They were chosen for their advanced engineering, the 55kW pack already meeting future Tier 4 final emissions legislation.

With the introduction of Tier 4 interim legislation, most engine manufacturers set out to meet the massive reductions in particulate emissions by incorporating a diesel particulate filter. JCB used the new laws as an opportunity to innovate and engineer a solution that meant no after-treatment and consequently lower running costs for the customer.

One of the major benefits is on fuel consumption and the Ecomax engine achieves savings of up to 10% compared to its Tier 3 counterpart. In addition, there is a huge maintenance and service benefit with the Ecomax as it runs on standard engine oils, with no additional service requirements.