The greens were of a reasonable standard but, with a decline in club members and no new young bowlers joining the club, they began to be used less. So much so that only one green was being used, and the other was still being maintained, but hardly ever played on during the season. This was causing unnecassary with extra scarification and brushing required to try and keep the speed up on the green which was not in use. The green closest to the clubhouse was being used by the members for three sessions a day, seven days a week, bowled quicker and had a much better draw because of its usage.

Jersey Bowls, the local governing body, and the States of Jersey Education, Sport and Culture Department, who lease the 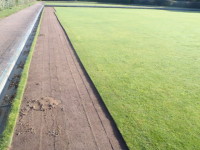 greens to the Les Creux bowls club, decided that something had to be done to put life back into the club and reverse the decline. Therefore, last year, it was decided to turn the two greens into artificial surfaces, less than fourteen years after they were turfed.

Both parties invited tenders for the work and Dales Sports Surfaces won the contract, worth nearly £150,000. In January of this year, the turf was cut and sold, as was the rootzone.

Once this had taken place, the contractor moved in and installed new ditches and green retaining kerbs. The old drainage layer and pipes were left in place after the existing drains and silt chambers were checked. This saved a considerable amount of money, thereby allowing the project to move forward. 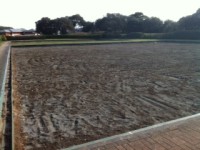 To bring the greens up to the required levels, additional aggregate and a binding layer were added. A grading machine with twin lasers was used to put the final levels in. These levels were also checked by World Bowls, the sport's international governing body to ensure they complied to regulations.

This year's dry spring helped with the timing of the construction; the greens underlay, a product called MatchPad 1250 which has a flat pile and made of mixed blends of polypropylene, being installed during the second week of April.

By the end of April, the playing surface was put down over the underlay. The playing surface is called Mastergreen, which is olive green in colour, and made of 100% UV light stabilised polypropylene reverse needled fibred carpet. After being pulled over the edges of the gree, the carpet was attached to the kerbs using standard carpet grippers. The carpet came in rolls with the joints being sewn together.

Mastergreen is designed to allow surface water to drain through the holes on the back of the carpet and underlay. With the exception of periods of extreme weather, 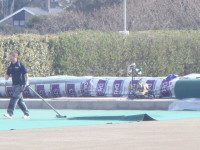 the surface will be playable at all times.

The ditches were also replaced, and the new ones were covered with carpet over wooden battens on the back of the ditch wall. The ring end markers and numbers have velcro backs to attach to the ditch wall and for easy movement. The eggshell ditch matting from the old greens was reused, as it had only recently been purchased.

A few days after the greens were completed, Jersey Bowls hosted Wales in an international Test match. Matches were played over the last weekend of April and the teams reported the greens were playing well. As yet, the way the greens play should not be judged, as they will improve once the carpets have received a second stretch.

When the carpets were installed, even with the weather being dry, the temperature on the island had not reached the required 20OC. 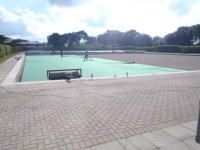 Therefore, as soon as the weather improves, Dales will be back on the island to stretch the carpets again and undertake any snagging items. Once this has been completed, the overall performance of the greens should improve greatly.

No artificial surface is completely maintenance free, so the surfaces at Les Creux will have regular passes, with a minimum requirement of once per week, with an electric suction cleaner and light brushing to remove leaves and other organic debris.

Pine needles have caused some problems as they seem to attach themselves to the carpet, so a flicking action brush is going to be looked at to make their removal easier. There are likely to be some ongoing problems in keeping the greens clean as they are sited in a country park. There are no overhanging trees, but debris from the surrounding trees is easily blown in.

Spraying for moss and algae will be carried out twice a year in March/ April and again in September/October. This is mainly as a preventative measure, but something that the club members should not neglect. 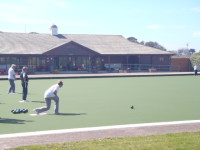 It may also be necessary to periodically carry out a power wash/clean, but this is something that should be left to the installers to undertake, as well as an annual maintenance check.

The greens will now be looked after by club members, and the skills of the greenkeeper from the nearby Sports complex at Les Quennevais will no longer be required. The machinery used on the old greens has been relocated to other playing fields.

Jersey Bowls and the States of Jersey Education, Sport and Culture Department will now need to start planning and investing for ten years time. The artificial surface will wear and deteriorate over this period, and the surface will have to be replaced.

These greens will add a new dimension to bowls in Jersey and may well help the Island Bowls when they compete on the international scene, where this type of green is becoming increasingly common. They will also complement the indoor bowls centre at Grainville which is well used in the winter months. 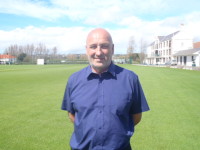 With Jersey's mild climate, the bowls season at Les Creux will now be extended, and we might even see a roll up on Christmas Day. The next addition to the greens could well be floodlights, so games can go on until 10.00pm in the months of September and April.

Could this be the start of a decline in grass greens for bowling, and will the sport of bowls follow that of hockey and move completely over to artificial?