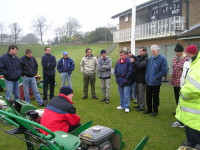 With the Jersey teams entrance into the ICC arena, their progression up to 14th in the Cricket European table and with the Island hosting the World Cricket League Division 5 this coming May it was decided to give the groundstaff additional support in the way of some specialist training.

STRI area manager Steve Gingell who visits the island twice a year to advise the States of Jersey on their faculties recently provided a one day seminar on Modern Cricket Management.

In recent years cricket square maintenance has changed and the way wickets are prepared also differ with the introduction of new machinery and the wider range in climatic conditions.

The audience of Groundsmen included all the States of Jersey groundstaff who are involved in the preparation of cricket wickets, Jim Perchard and his colleague from the Farmers CC and John Mountford from Guernsey who came over for the day.

One of the interesting subjects covered was the ASHES test (Assessment of Soil / Surface, Hardness, Elasticity and Saturation) which can be used before rolling the square. The test looks at the Bulk Density and Moisture content of a soil sample taken from the square. The results are then used to decide the ideal time to roll. 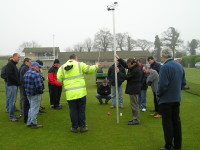 An interesting session took place out on the Grianville cricket square with the roller. A couple of passes were made over one of the end wickets. Everyone was surprised at how well compacted the area rolled was and all agreed there would be little benefit from carrying out much more pre-season rolling.

Before lunch Robert Jack of Dennis Mowers gave a talk and demonstration on the Dennis range of mowers and changeable cassettes. Robert provided a number of useful tips including how important it is to keep the air filter clean.

The afternoon session looked at the types of loam in use across the county. It was interesting to see how different they were when comparing strength, shrinkage and clay content. The day finished with an excellent question time.

Tim Le Feuvre of J.F.T.U the local agent for Dennis Mowers said after the seminar. He enjoyed the day and the information that was provided would not only be useful to all the local grounds staff but also to him, for when his customers come into the shop for bits of advice.

Steve Gingell would be returning to the Island in April on his first visit of the year to access the pitches before the start of a very import season for Jersey Cricket.