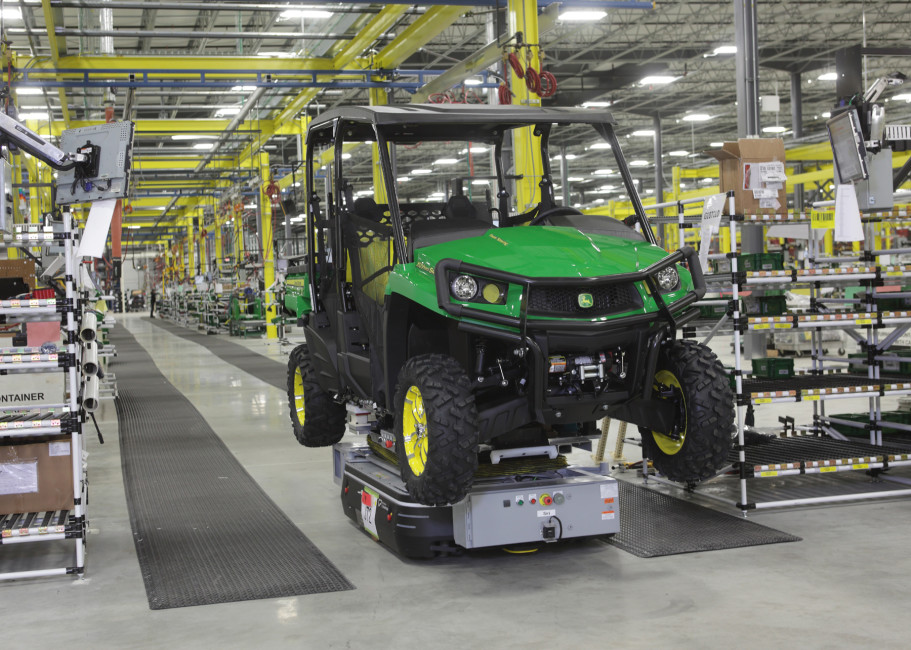 The first major expansion in 30 years at the John Deere Horicon Works factory in Horicon, Wisconsin, USA has resulted in a new 388,000ft2 facility for manufacturing the company's popular Gator utility vehicles. The expansion has added about 80 new jobs - around 70 in the assembly area and 10 new salary positions - bringing the total workforce to 1100 employees during the peak season.

"The expansion is a huge boon for the community, employees and the factory," said Horicon Works factory manager Steve Johnson. "Now we'll put each utility vehicle on our assembly line and it will not come off until it is built exactly the way the dealer wants it, ready for shipment worldwide - it places everything under our control. We'll be able to serve our dealers and customers better, improve the overall quality of the vehicles, and make our operations more efficient."

Previously there were two different factory operations working on Gator utility vehicles. The expansion now brings both the assembly and shipping operations to Horicon Works. Production began at the new facility in December and the move is scheduled for completion by March 2017.

"This investment shows our employees that all their work and effort to make this a great business from a safety, quality, and delivery standpoint is great for them as well. They've really helped us earn this opportunity to grow the business," Steve Johnson said.

Horicon Works dates back to 1911 when Deere bought the factory from Van Brunt Manufacturing, a maker of horse-drawn grain drills and other farm machinery. Original buildings at the site, located in downtown Horicon, were built in 1865. Over the past century, Horicon Works has manufactured a broad range of farm and recreational equipment, including bicycles and snowmobiles - the tagline 'Nothing runs like a Deere' originated with the snowmobile line in the early 1970s.

In 1963 Horicon built the first 110 lawn & garden tractor, signaling the company's first move into the turf market worldwide, and eventually settled into the current mix of products. Today, in addition to the extensive Gator utility vehicle range, Horicon makes premium lawn tractors including the X300, X500 Select and X700 Ultimate Series, and a wide range of attachments such as snow blowers, rotary mower decks and blades.