John Deere course maintenance equipment supplied by dealer Greenlay of Cramlington in Northumberland has been helping to prepare the Lee Westwood Colt Course at Close House for The 2017 British Masters in September - the first time the north-east venue has welcomed a European Tour event. 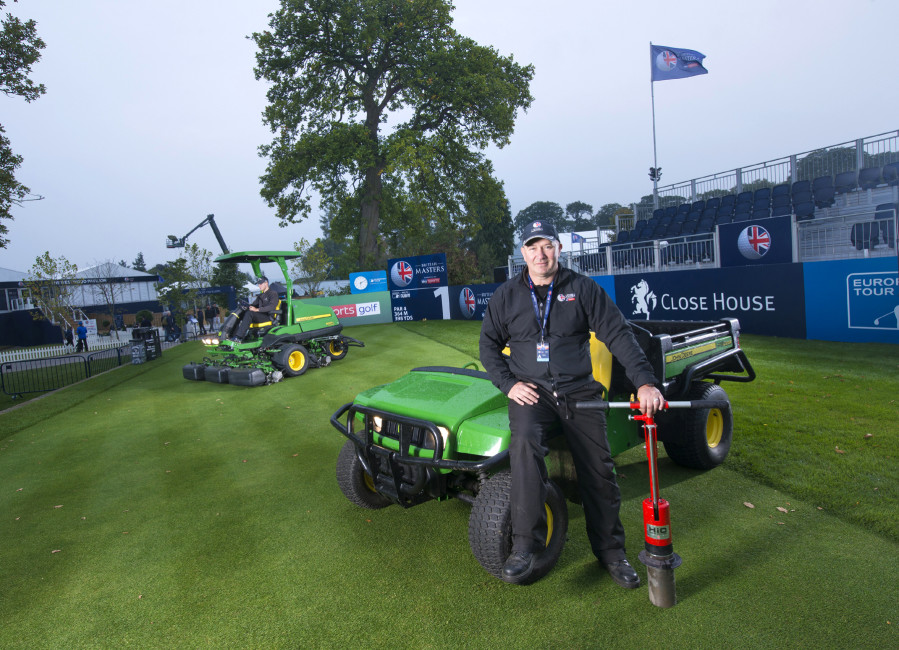 Supported by Sky Sports, the tournament has been hosted by the club's attached tour professional Lee Westwood, who originally opened the Colt Course in 2011 as the world's number one golfer. Other stars include Masters Champion Sergio Garcia and four-time major champion Rory McIlroy, who made both his professional tournament debut and first start in a professional event in The British Masters in 2007.

Set in almost 400 acres of beautiful Northumberland countryside at Heddon-on-the-Wall, Newcastle upon Tyne, Close House was voted one of the top 100 courses in the UK just 12 months after opening in 2011, and is the only course in the north-east of England to hold that accolade.

Lee Westwood has assisted in improving features on the course, and his experience in competing on the world's best courses has allowed the Close House team to produce a golf course that provides a challenge to all levels of golfer. "It's an undulating parkland course that is like a links to play," says course manager Brian Clark.

Brian and his team of 20 staff maintain all areas of the estate, which has three courses including the Filly and the 9-hole Yearling par 3 in addition to the championship Colt. These are maintained to a high standard with a large equipment fleet, including the John Deere machines.

To ensure this standard is maintained throughout the four days of tournament play and ensure the smooth running of The British Masters competition, the Close House team has been assisted by 20 volunteers, while John Deere and Greenlay have also stepped in with the loan of additional equipment to supplement the existing fleet.

"Course preparation started 18 months ago, and there has been a lot more fine manicuring to bring the cut to PGA presentation standards," says Brian Clark. "The 8000AE is being used on the fairways to maintain the height at 8mm throughout the tournament. Our existing John Deere 2653 utility mower helps keep the semi-rough to 30mm, and the greens are being mown at anything from 2.5 to 3mm.

"The mowers ensure a high standard of cut - whenever a new model comes onto the market I'm amazed at the improvement in cut quality. The extra Gators and mower trailers also help to ensure that we can get men and machines quickly and efficiently around the course to mow the tees, greens and approaches.

"Close House hosting The British Masters is very good for the north-east, and we very much appreciate the assistance from John Deere and Greenlay, with whom we have a good, long established relationship - the after-sales back-up the dealer provides is fantastic."