John Deere, one of the world's leading golf course equipment suppliers, is confirmed as the latest big-name partner to commit to The Solheim Cup at Gleneagles from 9th-15th September 2019. 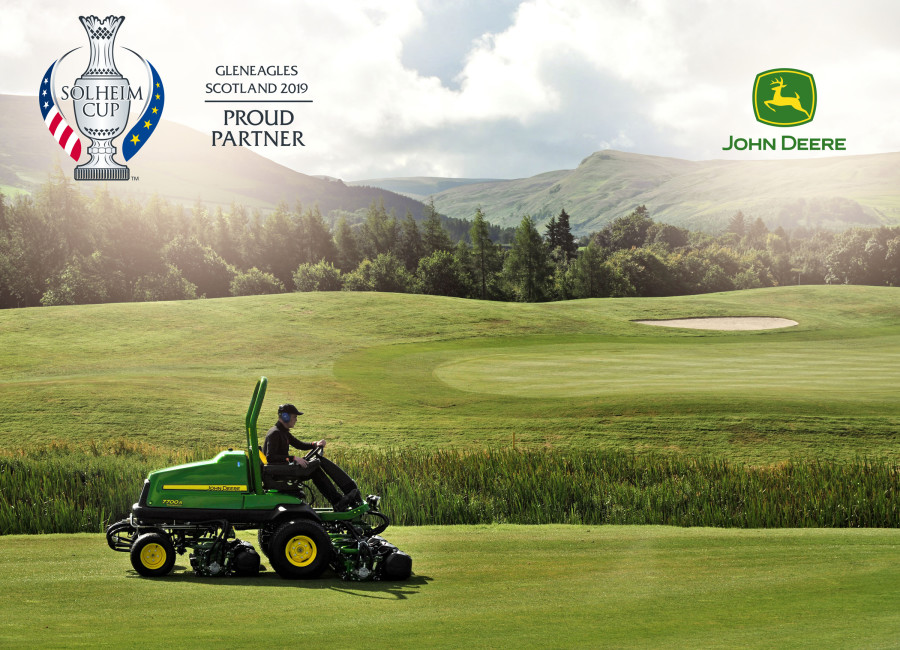 In addition, John Deere is also the partner of choice for Gleneagles, where the company exclusively provides golf course maintenance machinery and equipment for use across all three golf courses.

John Deere's partnership at The 2019 Solheim Cup will include on course branding, a display of John Deere products in the Spectator Village and utilising the association and event collateral for customer promotions and incentives at dealerships worldwide.

Carlos Aragones, John Deere European turf sales & marketing manager, said: "The Solheim Cup is one of the biggest events on the 2019 sporting calendar and we are delighted to be a part of it. We are very proud of our history of collaborating with major golf events and our association with both The Solheim Cup and Gleneagles is very important to our brand. The countdown is now on and we are very much looking forward to next year's event."

Scotland's Sports Minister Aileen Campbell said: "John Deere is a global company and an innovator in its field, and the partnership with The 2019 Solheim Cup is evidence of the significant international pull that both Scotland - the Home of Golf - and The Solheim Cup have in the sporting world. We look forward to working with them and our other partners to stage an outstanding event."

Ross Hallett, IMG Executive Tournament Director, added: "As we build towards The 2019 Solheim Cup, we have been overwhelmed with interest from within the golf industry. Announcing John Deere's support today is another important step as we work alongside VisitScotland in fulfilling their ambition of hosting the best Solheim Cup to date."

The recently appointed European Captain and VisitScotland Ambassador, Catriona Matthew, will be looking to return the trophy to Europe in 2019 after an inspired USA team retained the trophy by 16½ to 11½ points, in front of record crowds in Iowa. Organisers are now aiming to set a new record for a European edition in 2019.

Themes of equality, innovation and experience will be threaded through all the event's communications as The 2019 Solheim Cup aims to engage both the traditional golf audience and the wider sport fan, raising the profile of women's golf both in Scotland and internationally.

The Scottish Government and VisitScotland have been long-time supporters of the women's game, having partnered with the Ricoh Women's British Open and the recently significantly enhanced Aberdeen Standard Investments Ladies Scottish Open, which took place as a co-sanctioned LET and LPGA event for the first time last year.

The 2019 Solheim Cup will not only showcase the stunning assets of Scotland, the Home of Golf, but also build on the legacy of the successful 2014 Ryder Cup at Gleneagles. It will underline that Scotland is the perfect stage for major golf events as it seeks to help inspire a new generation of children to take up the game invented in their home country.