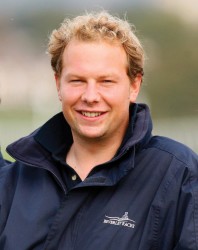 "The thoroughbred racehorse is a big animal, so the racing surface has to be stable and true. I believe that you have to focus on what is under the ground - the root and soil structure, and the turf will then look after itself"
John Morley, Head Groundsman at Beverley Racecourse

Westwood Pasture, just a short walk from the centre of Beverley in East Yorkshire, has hosted horse racing since 1690. A tight right handed track with a steep uphill finish, the course specialises in flat racing and attracted almost 14,000 racegoers to its Journal Ladies' Day fixture in August. Other season highlights include May trials for Ascot's Queen Anne Stakes and the Totesport Beverley Bullet sprint on the August Bank Holiday.

On mainly sandy soils, over limestone on the sprint track, and clay on the back straight, Beverley is relatively free draining, with its August meetings surviving the deluge that engulfed the North of England this summer. "We had 65mm of rain before the first August fixture and 40mm before the second, but the track took it really well, and there were never any worries about losing the meetings," comments Head Groundsman, John Morley.

John, who started at Beverley in March, was previously assistant head groundsman to Adrian Kay at York, and admits that he is still getting to know his new course. "I've gained a reasonable feel for the track, but have still to see how it copes with sustained rainfall, which will hopefully happen in the winter when we are not racing!"
In fact, he experienced the opposite end of the climate spectrum during the exceptionally dry spring, with going for the April meetings good to firm, and then running on the soft in August.

Beverley's season runs from April to September with four two-day meetings and as little as four days between other fixtures, so the timescale for getting the course back into perfect condition in between is tight. Especially as John and his team of three full time, plus one casual member of staff, are also responsible for mucking out the 111 stables!

Maintaining ornamental areas, including lawns and flower boxes, is also part of the workload, as is moving the running rail.

"The track is restricted in width especially on the bottom bend where it is only 12m across, giving just 2m of rail movement, but it is something we do regularly to give fresh ground for racing," John explains. "The home straight is actually a dog leg and we have found that 80-90 percent of the wear is on the inside 4m, so it is vital to move the rail."

In common with most racecourse groundsmen, this is one of John's least favourite tasks. "It is so time consuming, but I find that it is best to get everyone on to it and just get it over with," he says.

The free draining ground means that irrigation is another job that takes a lot of time, especially in a dry season.

"It was quite a surprise just how much water the track needed this spring to produce safe ground, and it was not an easy job as the irrigation system is quite antiquated," John comments. The Briggs boom system covers the full width of the track, but needs moving every 200m run, and is high on the list of equipment to replace in the short term. Fertiliser application also needs careful planning to ensure maximum take up of the nutrients, and was timed to coincide with irrigation in the spring.

"I needed to kickstart the turf for our 6th April meeting as it was still cold, so put a 9:7:7 compound on in March. This was followed by Scotts Mini CRF, which is 17:7:16, in late April. This was very successful and lasted thirteen weeks before reapplication was needed in August. I was really pleased with these products, which saved a lot of time," John comments.

A localised patch of leatherjacket larvae was treated and monitored, and there have been no recurrences. Weed control meanwhile is carried out on a spot treatment basis with John and his team using knapsack sprayers.

"It's more cost effective than getting a contractor in to spray the whole track, and avoids putting unnecessary chemicals on," he comments.

John was pleased to find a John Deere 1600T wide area ride-on rotary mower in the shed when he came to Beverley. "This is a nice lightweight mower that we also used at York. It produces a good finish, and you can still get on the course in the wet - we have not missed a cut due to the weather." 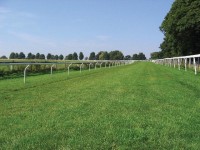 Cutting height is set at 89mm to maintain a dense sward and encourage tillering, whilst maintaining the ground cover required by the racehorse trainers, and the course is cut three times a week - 'little and often' as John puts it.

An Allett Buffalo walk-behind is used to maintain the paddocks and ornamental areas, whilst Etesia mulching mowers cut around the running rail.

"I'd like to look at a triple mower for the fine turf areas in time," suggests John, keen to boost productivity for his busy team.

At the end of the season, course renovation begins with a light spring tine harrow to rake out any thatch, followed by topdressing, then vertidraining and reseeding with Advanta MM25 which is eighty percent rye and twenty percent creeping fescue.

"I used this mixture at York and it was very successful. I have trialed other mixtures since coming to Beverley, but they are all pretty similar and I decided to go with what I know."

Past experience has also shaped his attitude to producing a top quality racing surface.

"The thoroughbred racehorse is a big animal, so the racing surface has to be stable and true. I believe that you have to focus on what is under the ground - the root and soil structure, and the turf will then look after itself."

He sees vertidraining as a crucial operation to improve soil structure and encourage root growth.

"Since March, the course has been vertidrained five or six times, whilst it was previously only done once a year. We don't have our own machine at the moment, but that is something I want to address in the near future."

Outside of the racing season, John's full time staff are kept busy with maintenance work on the grandstands and other buildings, and plans for this winter include planting up new areas on the roadside outside the course to improve its visual appeal.

"We have not stood still so far, and I have lots of plans to keep us occupied until April!" he says.

Prior to taking up his first head groundsman's role at Beverley, 28 year-old John had worked at York under Adrian Kay since deciding to move out of farming.

"I had a strong interest in racing and like working outdoors so, after taking a summer job at York, it went on from there," he explains. 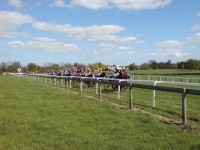 He credits Adrian Kay with having a strong influence on his rise to the position of head groundsman.

"He is second to none as a groundsman, and is so willing to teach people about the job, I couldn't have worked for anyone better," John says.

The major redevelopment works at York, which were completed in 2009, also provided vital experience. "I was able to be involved with major drainage and irrigation installation projects, which could prove extremely useful in the future."

As John concludes his first season at Beverley, he has plenty of ideas for continued improvement and development of the course - including that comprehensive machinery shopping list.

He says: "I am pleased with how the track has performed in my first year, and time will tell what developments will be needed. The steep uphill finish means that the bottom of the home straight can get damp, so localised sand slits may be needed, but I am looking forwards to getting to grips with it even more in the future."

As head groundsman, John recognises that he now has more responsibility than in his previous role, but also more say in how the course and racing surface will develop and improve. He comments that this presents a special challenge as a racecourse groundsman.

"I get the opportunity to work in an industry that I love, working outdoors and doing a job that really interests me. It's better than working in golf, for example, as there is no textbook about racecourse turf, so I will have to work out for myself how to tackle problems or speak to other groundsmen, and that's what makes it unique."