by Lee Williams
in Multi-sports venues, Hockey, Cricket, and Football
on 26 Mar 2021

Timperley Sports Club in Altrincham, Cheshire, is one of the country's oldest remaining community sports clubs. The large site includes two cricket outfields and two all-weather pitches - one of which has seen significant investment in the past year. Head Groundsman Andy Horsfield spoke to Lee Williams about how he single handedly maintains the site. 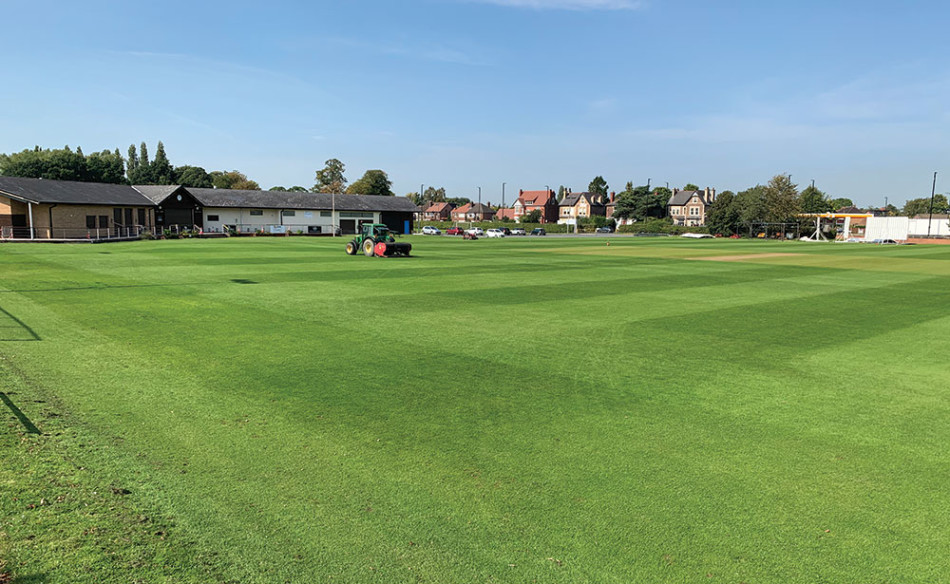 Founded in 1877, starting life as a cricket and lawn tennis club, it has grown to incorporate Timperley Cricket Club, Hockey Club, Lacrosse Club and Football Club.

Andy (thirty-three) starts by telling me what led to the club installing a new Astroturf, which has just been completed during the third lockdown. "Since 1991, we have had two Astroturf pitches on site, which were first relaid around 2005. In recent years, we were having real problems with one of the surfaces and, basically, it had come to the end of its lifespan."

"It was capped off and there was a lot of sludge coming up to the surface; the usual things that happen. We have a specialist machine that sucks up the sand, cleans it and then redistributes it. This operation is carried out three times a year on both surfaces to keep them refreshed, but this will only help for so long."

In 2019, the club decided to look into funding the new surface. With money in the bank (through the help of grants to fund the project), Covid-19 provided a window of opportunity.

"After looking at the recently relaid Astroturf at both Liverpool University and Formby Hockey Clubs, we appointed Charles Lawrence Surfaces Ltd to carry out the work," Andy added.

It took the contractors three weeks to complete the project from start to finish, but it was not all plain sailing, as there was an interesting twist to the story. "There are two types of shock pad; rubber crumb and the old material one which looks a bit like plasterboard scrim tape. In previous fittings, they just laid over the old type of shock pad which, over time, shrinks and they had filled in around the edges with rubber crumb. Apart from that, everything else went smoothly and they have done a great job. It's just a shame we can't show it off and let the members use it." 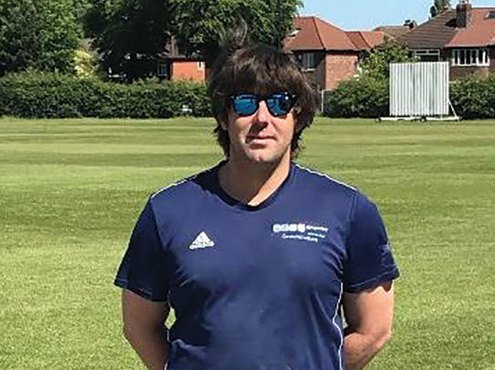 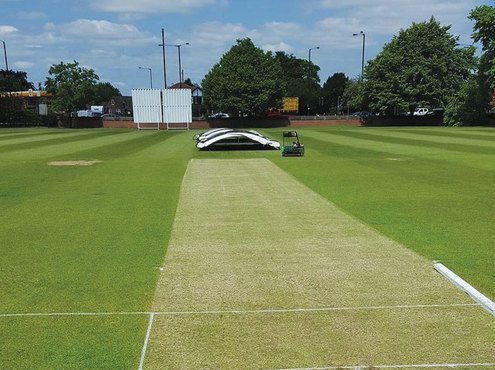 The soil profile across the site is heavy clay, which Andy points out caused a real problem with flooding, even though primary drains have been installed. "Despite the primary drains at five-metre centres, it wasn't enough with the rainfall and the soil profile. We installed secondary drains, which have helped alleviate the problem and we do not suffer from flooding anymore."

Andy's biggest headache is juggling the amount of sport he must accommodate at the weekends, and it is only getting more complicated. "Even though we have a big site, it doesn't feel big enough when we have all the sports running. We have two hundred car parking spaces (which is more than most sports clubs), but it is just not enough when everything is being played on weekends. If junior football and lacrosse continue, we have got a massive problem with cricket, because we will have clashes everywhere."

"We have six men's cricket teams and six junior football teams who all want to play simultaneously, which is not possible as the winter sports pitches are situated at the side of the square. Last year, because of the weather, we ended up playing football before cricket in the morning. So, the football parents would put the sight screens away, pull the boundary rope to play their football games and then put it all back out, so that cricket could play as soon as they had finished."

"The club expect the pitches to be marked and cricket to be ready, so it can be a lot of pressure on myself. We try and set a date when there will be no more football or lacrosse on the main cricket pitch and everything is played on the back. However, I cannot see us having any leeway this year to do that; depending on where we stand with playing in the Cheshire County Premier Division but, as things stand, no one knows."

Maintenance becomes a challenging and tricky situation when having to accommodate different sports on one site. "In summer, I will cut the outfield at 15mm. I know a lot of people cut shorter but, because we have a good percentage of ryegrass in the outfield, it doesn't particularly like being below 20mm. I did try 18mm, but there were quite a few comments that it was too slow. In winter, I will lift the height of cut to 30-35mm, to help protect the surface. In the past, I have dropped it to 25mm, but I feel this is better suited for professional sport or someone who can cut every day. Lacrosse absolutely shreds the pitches. The majority of play is all in the air and it is a very quick-paced game; they run and turn on a sixpence which causes some real damage. During winter, if it is too wet to cut after games, I will go over with the ride-on cylinder mower - without the cylinders engaged - to give it a roll and flatten it out in between games."

"Once a year, I will try and scarify the pitch in March/April when we do a renovation. During the season - in between games when the mud starts to rise up - I will pass the tractor-mounted SISIS rake over (if suitable), in an attempt to stand the sward up to dry it out. I do like to pass it over in the summer cricket season, but that all depends on the time available."

Aeration is a vital part of Andy's maintenance regime as he explains: "A contractor will come in after the cricket season, to relieve any compaction from constantly cutting. Between September and December, I have a small Shockwave which I like to use as often as possible, at a depth of nine inches, then possibly once before cricket comes back (however, that is leaving it late because clay has a memory and does open up). In addition to this, I have a slitter with worn tines that go down about three inches, which I will run over the site every week." 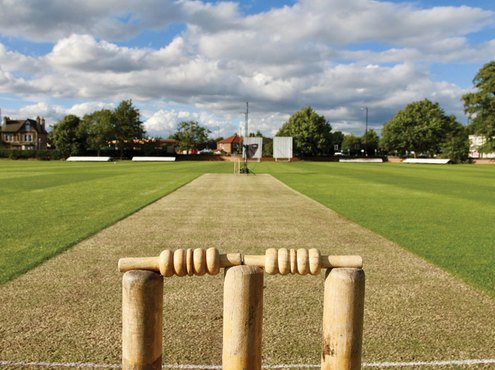 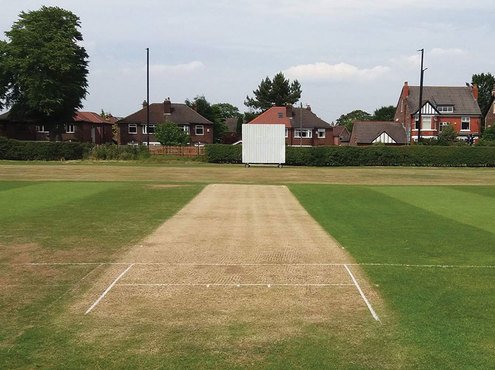 Andy moves on to tell me how he prepares his wickets ready for this season. "I spiked them just before I was furloughed in December; I managed to get a period where I could get the pencil tines on my little SISIS Autocore. Then, I sprayed them with GO Green Select, to harden them up for the next few months. When I get back, it will be a case of cutting with the rotary mower at 25mm - until I get the Dennis cylinder mower back from a regrind. As the temperatures pick up around March, I will start to cut more regularly with the Dennis, but keep the height of cut at 25mm as we get into the summer months, then gradually cut down to 18mm. In between cutting, I will reseed any bald patches that have not germinated from the end of season renovation."

"Once I get to 18mm, I will start to do a bit of pre-season rolling with the Lloyds Paladin. Then, I will switch over to my square mower and get the heavy roller on to consolidate the square. If I still have any areas that have not entirely filled in, I will overseed them again and apply Marathon Spring 16:4:8 organic fertiliser. Many people would say they do not do this, but I like to use Marathon; it is a fantastic product. If temperature are right; It helps to increase the number of beneficial bacteria in the soil. This is followed by Evolution5, which gives a slow-release feed over the next four to five months then, once the season starts, I like to use liquids."

It is difficult for Andy to fit in all the maintenance he would like to carry out on the wickets and the whole site. Even though he works independently, he prides himself on setting up the best wicket possible for a match day. "I like to start prepping a cricket pitch two weeks in advance of a game. On the main pitch, I will try and get water to a depth of 100mm. I will test the surface with a screwdriver or pin and water the night before using Reguflow lay flat hoses from Agrovista Amenity - which are lightweight, irrigation hoses that work under low pressure. I believe this is the best product for watering a cricket wicket. They saturate the pitch consistently all the way through at the required depth; in fact, I do not know how people do it without them. I get the bar staff to turn the tap on at ten o'clock before they go home and I will turn it off in the morning when I arrive, then cover the pitch with flat sheets or roll-on covers."

"Once it has gone through the drying stage and it is a more plasticine type of state, I will start to roll out. After carrying out the initial cut at 10mm, I will give it a good verti-cut in two directions and brush with the SISIS Combirake. Every two weeks, I will gradually reduce the height of cut to the required playing height of 6mm as I'm not a fan of shaving pitches down to 3mm. I think a lot of cricketers think that, because a pitch is golden and hard, it will play well - but that is not the case. I tend to use each pitch three times, with one practice, then move to the next."

After leaving school, Andy started his career at Connections. He found an apprenticeship position at Leigh Golf Club in Culcheth (through Myerscough College) and gained his NVQ Level Two in Sports Turf and started his Level Three, before leaving the club after six years to set-up his own contracts business. "As well as doing the contracting, I was looking after some local cricket pitches, which helped me build up my experience maintaining and prepping the wickets. After six years, I decided to come back into the industry for personal reasons, and I joined Timperley Sports Club."

On a final note, Andy was keen to tell me his thoughts on the sports turf industry and where he feels it's heading. "Working conditions, wages and no union to support us make it a tough industry to promote. We all go to work for money, and inflation is probably set to go higher with Brexit and the pandemic. The GMA is lobbying for a 1.5% raise, but that will not touch the sides for groundsmen - who are on low wages and below what they recommend. Most of the time, there are no pensions in the industry; unless you work for larger organisations. Take me for example; I'm a lower-level groundsman with a small pension pot, which will do nothing to help me later in life. I believe we will struggle to attract the younger generation to come and join us." 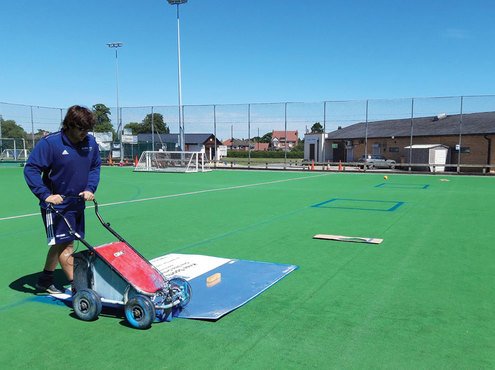 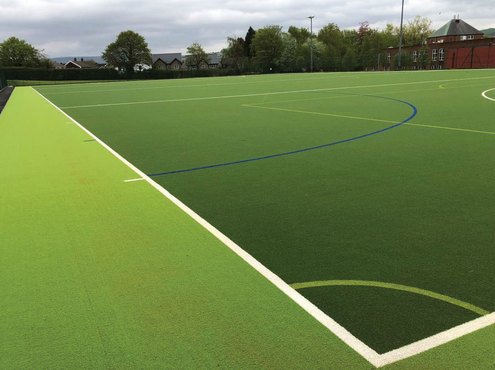