EFL League One side Wycombe Wanderers are currently exceeding all expectations sitting top of the division, with hopes of promotion to the dizzy heights of the Championship. Adams Park Stadium is their home ground, which is where Lee Williams met with Turf Tonics employee and Head Groundsman, Sean Woodley on, what was, a very wet and windy morning in November. 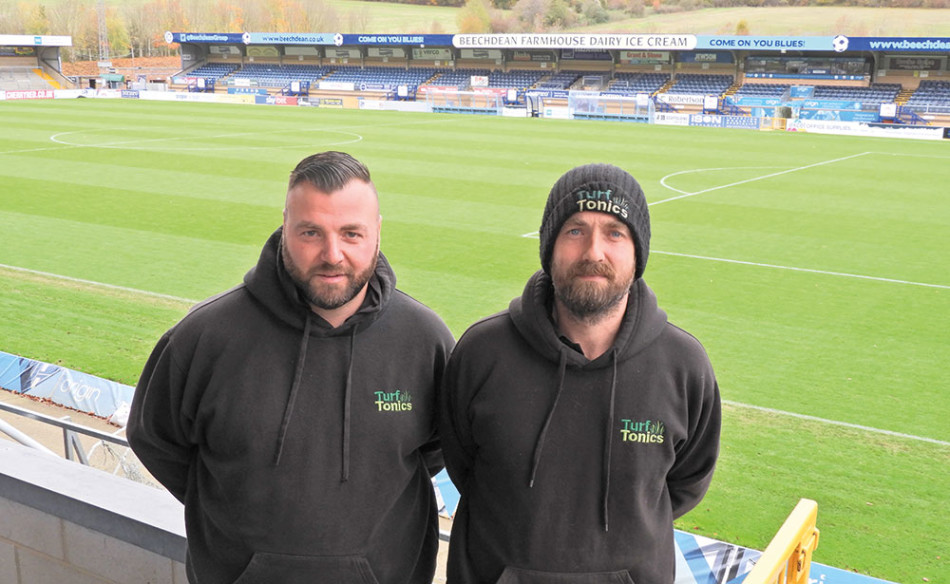 Sean Woodley found his way into the industry through Colin Wilson, one of Turf Tonics founders and directors who was course manager at Wycombe Heights Golf Centre. "I'd been working in the kitchens at Wycombe Heights Golf Centre for twelve years and was at a point where I was getting frustrated and wanted a change. I knew Colin well, and I admired the work they did out on the course and it looked like a career I could get my teeth into. So, for months, I was hounding him for an opportunity to join his greenkeeping team but, unfortunately, there were no positions available. Colin then left the club to set up Turf Tonics with Steve Gardner. Then, one day, Colin phoned me up out of the blue and asked if I wanted a job? The opportunity was too good to miss."

Sean was thrown in at the deep end and was immediately set to work as a groundsman looking after the Adams Park Stadium pitch. But he needn't have worried as Steve's dad Jim, a former groundsman for the club, was prepared to show him the ropes.

"Jim took me to the training ground, showed me how to mark out a pitch, string out and generally how to set a pitch up. Then it was up to me to put that into practice on the stadium pitch. Along the way, I have had lots of help and guidance from Colin and Steve, who have been very supportive. I took on board everything they had to offer me, and the hard work paid off in 2017 when they made me the Head Groundsman, which was a very proud moment for me."

I was surprised to find out that the stadium pitch was an eighteen-year-old Desso with a medium/fine rootzone. This is the same age as the Desso at Oldham Athletic which I worked on during my time as Head Groundsman, so I can sympathise with the issues and challenges Sean now faces. 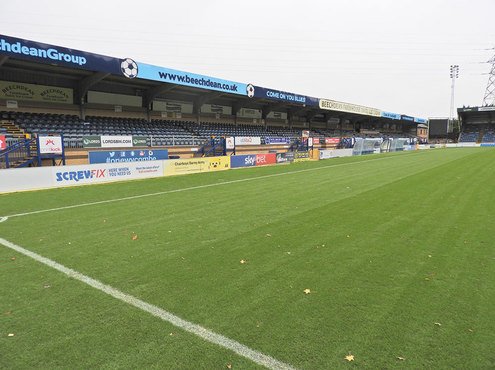 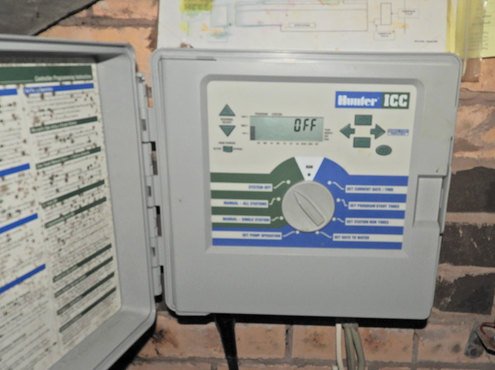 "London Wasps helped install the pitch when they were here eighteen years ago, so it does have undersoil heating which still works. It does cost a fortune to run so, before we switch it on, we have to send a report to the club who will then give the go-ahead as the cost to run it is not in the contract. We have a Hunter irrigation system with sprinkler heads around the outside, but not in the middle, which isn't ideal, although we were recently given the budget to update the heads."

I asked Sean if he had recently checked the depth of the Desso fibres. "Funnily enough, we looked at this a few months ago, and they are now at depths varying from 5-6 inches. This has started to affect the stability of the pitch and how it plays, but is just something we have to work with."

The pitch has a lot of use through the season as they host Reading Ladies who use it as their home ground. Reading's under 23s play four or five fixtures and they are to host an England under 20s qualifying game against Iceland.

Sean tells me the stadium has its own climate and suffers heavily with shade because of where it is situated. "It can be zero degrees down the road whilst, in here, it will be minus two degrees! We have a period in winter of nine weeks with no light as the sun does not rise high enough to get over the bank with the trees behind the main stand. We did a shade diagram for the EFL four years ago and, every day for nine weeks, we just shaded it all in! We have looked at lighting rigs, and discussed it with the club on numerous occasions but, like most things, it comes down to the cost of purchasing them and, once you have them, the cost to run them is not cheap. In the summer, we have the opposite problem. It can be like a sauna in here, we can't get enough water on and it can start to bake the pitch off."

Renovation on the pitch has been limited this season due to the financial situation. This meant they were not able to strip the pitch off with the Koro as they have done over the last four years. This is not ideal considering the amount of use the pitch gets through the season. "I used the Campey UniRake and scratched the surface in many directions over two days and took as much rubbish out as I could. I then picked up the debris with the Kubota G23, which I think does a great job. It was then dimple seeded with ten bags of Johnsons Premier Pitch. We then applied forty tonnes of medium sand and brushed that into the surface with the Greentech tractor mounted brush. Six weeks after, we went over it with the Toro Procore 648 with 19mm tines at a depth of four inches."

Sean is responsible for ninety-eight percent of all general maintenance carried out on the stadium pitch throughout the season; the only job he doesn't carry out is spraying, this is carried out by other Turf Tonics staff. "Summer cutting heights start off at 32mm, and I will gradually lower that to 24mm for the start of the season. In winter, I take it up to 28mm. I use a Dennis G760 cylinder mower. I don't tend to scarify the pitch throughout the season as I like to use the tractor mounted brush to stand up the sward and adjuvate the surface after every game and, after every couple of games, I will go over with the UniRake. I will hoover up the debris with the Dennis Pro 34R; I find this helps to keep the surface clean. I have just overseeded with four bags of a cheap ryegrass mix, on the vertical, to try and help us retain some grass cover over winter."

"An important part of my general maintenance is aeration, but I have to be mindful of my timings around fixtures. I don't want to open it up too much before a game and make the surface to soft. This week, I have been over it with the Toro Procore with 10mm tines at a depth of four inches and the Air2G2 with six-inch tines as this was the only gap I had for a while."

Soil samples are taken a few times a season through their fertiliser supplier. Once the results are back, Colin and Steve will put the fertiliser programme together depending on what budget they have available for the season. They will also look back at what has worked in previous seasons. The programme generally consists of a 50/50 split of granular topped up with a liquid fertiliser mixed with bio-stimulants and turf hardeners. They aim for around 250 to 300kg of nitrogen a season as the budget allows but, at the same time, they believe this helps reduce disease. They are now trying to go down a biological and mechanical route to try and strengthen the plant rather than use fungicides.

"To try and help suppress disease, I will put the dew brush over the pitch in the mornings before I cut. It's hard work but, on the upside, it keeps you fit; the downside is I'm blowing out my backside by the end of it!" 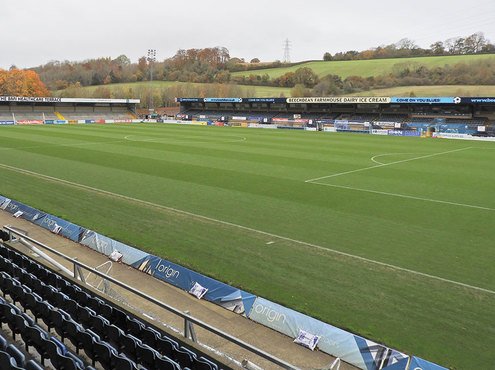 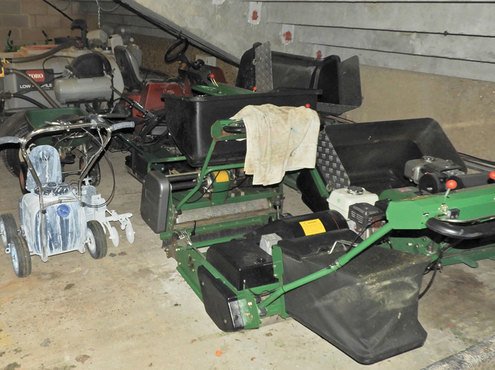 "Wycombe have a training ground comprising two and bit pitches and a goalkeeping area on. This has very little done to it apart from being cut and marked and then a couple of fertiliser applicatins per year. In winter, we will try and get the pitches verti-drained and shockwaved to help keep them dry. We don't have a pop-up irrigation system, so it's a real battle in the summer months."

The machinery Sean uses is owned by Turf Tonics who like to try and find the right machinery for the job and are not committed to any one manufacturer.

I put the question to Sean that, if money was no object, what piece of kit would help improve the quality of the pitch? "That's easy. I would like a full set of SGL lighting rigs. They would make a massive difference to the playing surface. In all honesty, even one lighting rig would make a difference."

The club plays at Adams Park, which is situated on the western outskirts of High Wycombe, and traditionally play in quartered shirts of navy (Oxford blue) and pale blue (Cambridge blue). The club's nicknames are "The Chairboys"and "The Blues".

In 1887, a meeting held at the Steam Engine public house in Station Road, High Wycombe saw the formation of Wycombe Wanderers F.C. It is highly likely the club was named Wanderers after the famous Wanderers, winners of the first FA Cup in 1872. The club played friendly matches between 1887 and 1896. It first entered the FA Amateur Cup in 1894 and the FA Cup in 1895.

In 1895, the club moved to Loakes Park, which would become its home for the next 95 years. In 1896 the club joined the Southern League and competed in the Second Division until 1908.

The club has played at the stadium since 1990. During the 2003-04 and 2004-05 seasons, the stadium went under the name of the "Causeway Stadium" for sponsorship reasons. The move was financed almost solely by the sale of the club's former Loakes Park stadium to the health authorities to facilitate the expansion of Wycombe Hospital.

The stadium has a capacity of 9,448 with four stands. The original seating stand (Beechdean Stand) is on the north side of the stadium, with a capacity of 1,267. The largest stand in the stadium is the Woodlands Stand on the south side of the ground, which was built in 1996, replacing a covered terrace. It has two tiers, the upper tier being known as the Frank Adams Stand (like the stadium, named after former captain Frank Adams); the lower tier is the Origin Family Stand. It has a total capacity of 4,936, including sixty brand new '2020' seats, which can be used by both seated and standing spectators.

The away section of the ground, on the east side, is the Hillbottom Stand (Lords Builders Merchants Stand) with a usable capacity of 1,816 (although the physical seating capacity is actually 2,059). This stand was rebuilt in 2001, almost doubling its previous size. The stadium also has one terrace, on the west side, which is the Valley Terrace (BMI Healthcare Terrace) and is the home supporters' end. It has a capacity of 1,429.