Lights seized from cannabis farms are now helping grow 'the right kind of grass' after being donated to the groundsmen at Rochdale AFC. The equipment has allowed staff to build a lighting rig to maintain the pitch's problem areas - saving the Dale more than £60,000. 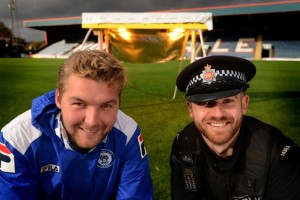 The two metre square rig, built using old five-a-side posts, will be used to help keep the Spotland playing surface lush and green in the goal mouths and around the tunnel.

Head Groundsman, Oli Makin approached Rochdale police to see if they could hand over the equipment, confiscated during raids on drugs factories in the area, after hearing that Nottingham police had done something similar for Notts County.

The donation was organised by Sergeant Andy Fern, who is also encouraging officers to give any more lighting equipment seized in the future to the club. Oli, 24, said: "We're starting to use it everyday. After the game on Saturday we put it straight back on the pitch.

For the full story from the Manchester Evening News click here