1 Keeping it in the family

Keeping it in the family

Some would say that groundsmanship isn't just a career - it's a vocation. But despite the huge variety of career choices on offer, there's still a steady flow of school leavers and students enrolling on college courses and apprenticeships in the turf maintenance industry each year. And regardless of the competition from other sectors, individuals are still giving up their careers in other industries to become groundsmen and greenkeepers.

Everyone who's involved in the profession is aware of its rewards and draw-backs and none more so than those who've grown up around it.

Ellie Tait asked three groundsmen and their fathers to explain what it's like having groundsmanship in the family.

Alan Ferguson - "I knew from my early teens that I wanted to be a groundsman. My grandfather was involved in gardens and I used to help keep a large lawn and from then on I was hooked. Coming from St. Andrews, anyone remotely interested in turf couldn't fail to be inspired by how the local courses were prepared for The Open Championship.

As a youngster, I wanted to do all the usual jobs young lads dream of - train driver, firefighter, pilot but I larked about too often at school and didn't do particularly well but realised I could still have a good career if I got stuck in to an apprenticeship as early as possible.

I started at St. Andrews Links as an apprentice greenkeeper on the Old Course and worked my way up to become Course Foreman on the New Course. I then worked at Bathgate Golf Club near Edinburgh as Head Greenkeeper and spent some time with Sports Turf Services learning about the contracting side of the industry before moving to Rangers then into my current role at Portman Road.

I love my job and now enjoy putting something back into the industry, whether it's through the IOG, colleges or the FA. Having three sons I always hoped one of them would become a groundsman. The industry's changed a great deal since I joined. Youngsters can have a very rewarding career with good educational backup. The job itself is better now and so is the money. I hope Rory can be his own man. He certainly has the character! His good people skills are important for anyone hoping to make it in the industry. I think he as what it takes to go all the way and become a good Head man. I don't have any concerns for him but hope people take him on his own merits, and not because he's my son."

Rory Ferguson - "I've wanted to be a groundsman since I was about 12. I'm now 16, have done my GCSE's and am starting college where I'll be studying for an NVQ Level 2 in Sportsturf. I've grown up around the industry and have been helping dad at the training ground and on a matchday for a while now. He's very dedicated to his job and his club and often works late but he's also taught me a lot about the plant and general turf maintenance, which helped me when we covered those subjects at school. I'm very interested in the science involved in groundsmanship and am always learning new things from him and his team.

I think I'd still have become a groundsman if dad worked in another industry - it's fascinating. Over the summer, I've gained some practical experience at Ipswich and on the turf farm for SIS before going back to college. In the longer term, I plan to gain further qualifications and eventually I'd like to become Head Groundsman at a major football club. I admire the working relationship my dad has with the board and coaches at Ipswich and I'd like to earn the same respect that he has gained at the club." 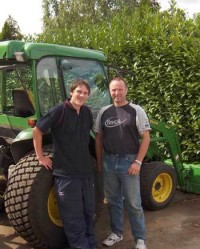 Chris Parry - "From the age of four I use to walk alongside my grandfather whilst he prepared cricket wickets and marked out football and hockey pitches. He looked after the 11-acre Leicester YMCA sports ground which our house backed on to. When I turned 12, he trained and entrusted me to drive the tractor and use the trailed gang units and from then on I was hooked on turf. Grandad retired in 1978 after 25 years in groundsmanship and it was around that time I met Keith Kent. At that time, he was a groundsman at Leicester City's training ground, just over the fence from the YMCA. I spent all my spare time helping Keith who taught me a great deal about maintaining football pitches.

I was also interested in plants and trees and at one point wanted to join the Forestry Commission but left school and got a four-year apprenticeship as a trainee gardener/groundsman with the local authority and attended the local horticulture college on day release. The combination of learning and earning suited me. I've never given a thought to any other career, despite spending six months unemployed in 2002.

My goal was to be a Head Groundsman, preferably at Leicester, and even though I deviated into horticultural maintenance for 9 yrs, I got there. I love my job, the prestige, the pressure, the challenges and the job satisfaction of producing an awesome surface.

I'm pleased that Matt has shown an interest in groundsmanship. As a child, he loved being at the training ground or Filbert Street with me so it came as no surprise that he wanted to follow in my footsteps. He's already had a good insight into sports turf maintenance but I feel he now needs to learn about other people's ideas and working practices and I want him to be trained by someone else other than me.

He's a sensible and conscientious person and I know he'll work hard and do his best. The advice I've given him is to listen to what people tell you, learn from them and learn from your own experiences."

Matt Parry - "I'm 16 years old and recently started work as a trainee groundsman at The Concorde Club at Heathrow. Dad got his first job as a stadium groundsman when I was seven and didn't really realise at that point what he was doing. I just remember being excited about him working at a Premiership football ground. He'd been self-employed before going to Leicester City and chose his own work hours.

From that point on, he worked very long hours and the effort he put into his job was immense, it was like his whole life had changed. We definitely saw less of him, but there were good things about his job too - getting to meet all the players and being able to stand pitchside at closed training sessions was amazing. I'm the third Parry in four generations to become a groundsman so it's very much in our blood. Now I'm older and I'm able to work alongside my dad at Quins, he's able to teach me to a higher standard. I have a feeling my dad's knowledge and experience will be useful when I start my NVQ level 2 course too.

I didn't really consider a career in the industry until about 2 years ago when I began to help dad at The Stoop. The more I helped, the more I enjoyed it and I started to give my career some serious thought. Like all young lads, I had my heart set on being a professional football player and I also considered sports coaching but I'm now I'm firmly focussed on groundsmanship. I aim to learn as much as I can, from as many people as I can and am prepared to work hard to go up through the ranks at a sporting facility. I'd eventually like to become a Head Groundsman. I know it's not the sort of trade you can pick up in a couple of years. There's a long journey ahead if I'm going to reach my goals but I'm willing to work at it." Anthony Asquith - "I'm 26 years old at am Head Groundsman at Chapel Allerton Tennis Club. I didn't start my career as a groundsman and I certainly wouldn't have become one if it hadn't been for my dad. I started doing temporary work at Chapel Allerton over the summer while studying for a sports science degree and it was then that I realised I wanted a career in the sports turf industry.

The Head Groundsman at the time liked my enthusiasm and I was offered the position of Assistant Groundsman on a level with my dad who was also a groundsman there. I studied for an NVQ 2 and 3 in Sports Turf at Askham Bryan College in York and also did my spraying certificates. I was promoted to senior groundsman and then into my current role. Earlier this year I was also asked to maintain the four pitches at Yarnbury Rugby Union so I now manage both sites with the help of my dad, Garry.

I came into the industry by accident really, just a case of being in the right place right time. I'm driven and I liked working outdoors in a sporting environment. I love the industry now and believe things like pitchcare.com move it forward. I was a professional rugby league player for four years when I left school, playing for Dewsbury from the age of sixteen and if I'd not done that summer work, I'd probably have worked in the sports industry in some capacity. I'm ambitious and plan to keep improving the courts and possibly progress to a more prestigious club or facility when one becomes available. Dad and I have got an excellent relationship. I know I can rely on him. Instead of being father and son, we're more like mates and definitely sing from the same hymn sheet."

Garry Asquith - "My background is in gardening, but before that I'd been a postman and a milkman. I've always loved the outdoor life. I applied for the groundsman's job at Chapel Allerton back in 1990, coming into the industry late at the age of 37. Fifteen years on and I'm still in the same job. Turf maintenance is a real family affair with us. Anthony works with me and my other two sons are both greenkeepers, one at Moortown Golf Club and the other at Leeds Golf Club.

I'm very contented at the tennis club. I enjoy my job and have no plans to do anything else. I'm also really proud of Anthony. I wanted him to be educated as I always knew he'd do well. He's only young but he's already come a long way, being a Head Groundsman at 26. For him, the sky's the limit! Working together's excellent and the arrangement works well for us."

If you know of any other father/ sons / daughter partnerships that have worked or still work in our industry please let us know, Send details to laurence@pitchcare.com