Spearheading changes in football playing surfaces for the top flight can be a precarious occupation, especially when you run the risk of being cruelly exposed to trial by media - not to mention the club and supporters - if the venture falters.

But well into the season, Rangers FC's Head Groundsman, David Roxburgh, can report success for the new pitch installed at Ibrox last year. But with that comes the commitment of maintaining the facility - one that has sparked another wave of change as Roxburgh decided to switch machinery supplier from Toro (after dealing with them exclusively for some 18 years) to John Deere under a five-year deal that has heralded in a veritable battery of turf care equipment for duty at both Ibrox and the Murray Park training ground at Milngavie.

As the first football ground in Scotland to feature a 100mm Fibrelastic rootzone from Mansfield Sand - and only the third in Britain after Newcastle United and Bristol City - the pressure was on to demonstrate the prudence of a move into relatively uncharted territory.

Installed between mid-April and early June by contractors Souters Sports, the innovative Fibrelastic surface features real grass reinforced with rubber fibres incorporated into the turf. "We were in dire need of a new pitch as the old one had been there for fourteen years, four more than is expected from a top-flight venue," declares David, "so we had to invest in a brand new generation pitch with a completely new rootzone to get the surface right again."

"After removing the old turf, the upper rootzone and part of the lower rootzone to a depth of 150mm, a new pure sand rootzone was installed up to within 100mm of the final surface. 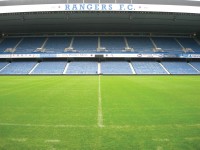 The top 100mm was then filled with the Fibrelastic sand and synthetic fibre mix containing a percentage of elastic and the grass seed sown into it.

The pitch delivers greater durability and resistance and more even ball bounce, says David. "It is not as hard a surface as our previous sand construction pitch," he adds.

David had to be certain that the new product came up to scratch though and brought in consultant agronomists at the Sports Turf Research Institute (STRI) to put the material through its paces. "It provides great stability and consistent performance across the whole surface," he confirms.

These are shared between Ibrox, managed by Deputy Head Groundsman Paul Matthew, and the Murray Park training facility, with David overseeing eight groundstaff across both sites.

Four new John Deere R54RKB 22in rear roller walk-behind rotary mowers were bought in the summer, specifically for use on the new Ibrox pitch.
"We needed to look at the best way to maintain such a high performance sports surface, and so I studied what was happening with other pitches in England," he recalls.

"Many of my counterparts use mowers to clean the pitch surface after matches, not just for grass cutting. The new rotaries are used as much as a maintenance tool for 'hoovering' up any debris after games as they are for cutting and striping, with the advantage that they leave a lighter footprint.

After so long a commitment to Toro, why the decision to switch supplier?

"The machinery was also a major deal for the club, and we went through the due process with all the major suppliers. We spent a year researching the competitors and decided to move in a new direction and opt for a five-year lease programme, a far better option for the club."

"Nairn Brown came way above anyone else in terms of back-up service and support for Rangers, and the professionalism of the dealership is what really made the difference."

Machinery aside, the relationship with the dealer is all-important, believes David. "Any issues we've had have been dealt with immediately - and not just because it's Rangers, that's what Nairn Brown promises and delivers to all its customers."

The Fibrelastic construction has greatly reduced the man-hours needed on pitch maintenance, Roxburgh confirms, although work on it is still essential to provide premier playing conditions. "Far fewer divots are generated and, after every match, we will usually vacuum the pitch and sort out any minor scars created during play."

"We will need to mow the grass once a week unless it is in a more active growth period, then it might increase to three times weekly."

David has introduced a detailed growth programme for the surface, which he developed jointly with supplier Rigby Taylor.

"We have a team of three full-time groundsmen at the stadium and they'll usually be working six days a week here. We also take care of the club's training pitches at Murray Park, half an hour away."

Ibrox wasn't the only site to benefit from Fibrelastic technology. The training ground boasts "two and a half" pitches as well as four sand construction ones at the 14-acre site, created eight years ago under a £17.5m investment.

"We start immediately after the game. A squad of four groundsmen mow up any debris, then we deploy the lighting rigs two to three hours after the match."

"On Monday we will move the rigs to new positions and begin repairs, scraping off scars on the pitch. Mid-week we cut the grass if growth is rapid and continue to move the lighting rigs around the pitch throughout the week."

"On Friday we remove the rigs and cut the pitch in two directions, finally adding water to the pitch before the game - just enough to moisten the leaf so the ball will move quickly on the surface during the match. Though this depends on the weather conditions at the time and also the opponents - it might be the case that the team don't want a fast playing surface for a particular game."

"The players are sometimes spoilt for quality here. Unlike the English Premiership, the quality of pitches in the Scottish Premier League does not reach the same high standards throughout. This is also true when we play away in European Cup competitions. The players grow to expect the highest standards."

When natural light is as thin on the ground as it is at Ibrox, David explains, the priority was to ensure that the pitch had every chance to thrive, hence his decision to invest in three portable lighting rigs, manufactured by Norwegian company MLR, to promote grass growth throughout the playing season.

The importance of artificial light to the pitch cannot be underestimated, he maintains. "Ibrox is one of the darkest pitches in Northern Europe. We receive no direct sunlight on to the pitch for virtually the entire winter."

"Artificial light is a major factor in why the pitch is in such good condition. We are able to manufacture August light conditions throughout the whole year. The rigs are an essential piece of kit for us - in fact they are arguably the most important factor in the quality of the pitch."

"When the lights are in place, we are applying what is effectively a summer regime throughout the winter."

"This high level of maintenance means extra work for the staff, particularly on match days, he concedes, "but all to the benefit of the pitch".

"The club has invested heavily in these improvements, more so compared with English Premiership sides with their TV income, but we now possess a good asset and a sound base on which to build."

"We ultimately aim for the best possible surface, although sometimes Mother Nature throws something at you that you don't expect or you can't do anything about".

"One of the main problems can be cold weather which, despite undersoil heating, can sometimes cause freezing to the pitch and frost burn on the grass blades. This occurred at one Old Firm tie, when minus temperatures prevailed until well into the afternoon."

Despite such occurrences, If Rangers lift the Scottish Premier League title this year, what price Old Firm rivals Celtic looking enviously at the Ibrox pitch as one key factor in their success.