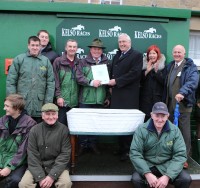 Kelso racecourse groundstaff have been given the highest accolade in racing. In addition to being selected as the best national hunt racecourse in 2013, the team won the overall award against stiff opposition from the other category winners, Leicester (Multi-purpose) and Chester (Flat).

The announcement was made at the RCA Showcase & Awards in November, but the presentation to the whole team took place at their meeting on Sunday.

This year, Kelso took the brave move to make significant alterations to their track layout. It is always difficult to introduce change, especially in something so traditional as horseracing. The Course Executive had to be convinced and the race goers had to be persuaded that the changes would have great benefit - not only producing more exciting racing but improving the flexibility on racing lines and the consistency of the racing surface, having a dramatic impact on course presentation during the winter and allowing an increase in the fixture.

Hazel Peplinski, Clerk of the Course, Kelso Racecourse commented; "From a groundsman's perspective, Kelso has had an extremely challenging 12-18 months; what with the new course layout, new fences and unprecedented weather conditions. However, Brian, Logan, Davie, Alastair and Connor have answered every call magnificently and retained their sense of humour throughout - they truly deserve this award."

Bill Watt, of Watt Fences, presented the award to Head Groundsman, Brian Meikle, and his team.