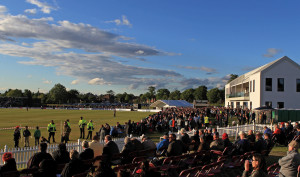 Since Kent County Cricket Club was formed in 1842 it has played at twenty-nine different grounds across the county. The outground has been always central to its appeal, though these days away from its spiritual home of The Spitfire Ground, St Lawrence in Canterbury, it has just two: The Nevill Ground in Tunbridge Wells (issue 65) and the County Ground, Beckenham.

The facilities at Beckenham say everything about the direction the game is going, yet hold true to Kent's ideal of sharing its matches across what is the sixth largest first class cricket county.

The County Ground is a relative newcomer to the Kent cricket scene, staging its first - and for nearly half a century, its only - Championship game in the 1954 season. In those days, it was the Lloyds Bank Ground. Kent cricket didn't really have a regular interest there until 2003, since when it has mostly been a venue for one-day fixtures and, more recently, T20 games.

Bordering London has meant that Kent has always had a metropolitan following. Like earlier outgrounds at Blackheath and Dartford, Beckenham was once firmly in the county, but postcodes and swelling conurbation has 'claimed' it for London. If you're Kentish you still say Beckenham in Kent, just as you would for nearby Bromley, where Kent played its first ever match 174 years ago at White Hart Field.

Three years ago, Kent County Cricket Club and Leander Sports and Leisure began major redevelopment of the Club's Worsley Bridge Road ground in Beckenham. Largely completed ahead of the 2015 season, this dramatically enhanced facilities, which included an indoor cricket school to ECB Academy standards and a new 2,000-seater stand. 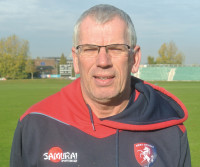 Kent has a 20-year lease from site owner Leander, with plans to establish it as 'northern headquarters' for the club's long-term development.
Amongst the many other features of the ambitious project were a banqueting area, new offices and floodlit AstroTurf football pitch, used by Premier League club Crystal Palace.

"From a cricket point of view, the outfield has been much improved, a new digital scoreboard has been installed in the same place as the old one, and a great deal of effort has gone into upgrading the spectator and car parking areas," said Kent Cricket CEO Jamie Clifford.

"The ground is also much-used by Kent Women and by our Academy and Second XI and, in the near future, if we get the support here that I believe we will, I can see us staging first team matches regularly throughout the season."

"This is our second ground, behind Canterbury, and more games on the fixture list will allow supporters and businesses from metropolitan and north Kent to feel even more involved in what we are doing as a true county cricket club."

If you look at the County Ground, Beckenham, even in November when thoughts of cricket are on the backburner, you can see that it is a venue that has ambition and is definitely going places.

In a break from completing surface work on a new irrigation route to the square, Deputy Head Groundsman, Adrian Llong, talked to me about how pitch work there was being cranked up to deal with a likely busier programme of top level cricket. Groundsman Paul Whittaker, who has been working here for ten years, joined us.

Straight away, Adrian's enthusiasm for cricket and its playing surfaces is obvious. "A cricket ground in top notch condition looks better than anything else in sport," he said. "The outfield striped, the pitch white, and the new ball flying through on a sunny summer's day - what beats that?"

At Beckenham, Kent is trying to replicate the pitch and outfield at its Spitfire Ground, St Lawrence, Canterbury, and this includes the equipment on hand. This is to achieve a mirrored high standard of playing conditions.

"We had a meeting with Jamie Clifford about things here at Beckenham about a year ago, and he told us he wanted, as far as possible, to get all our pitches to be the same. He has been actively supporting us with our equipment and materials needs in order to achieve this," added Adrian.

The square is as big as many a main county ground, with thirteen pitches available for play. The outfield is 1.75 hectares, which is about the same size as Canterbury's. Apart from evidence of visiting Canada Geese, and green rather than white strips in the middle, the whole play area looks immaculate and ready for play.

"The geese are a slight annoyance right now, but everybody loves them," said Adrian. "You turn up in the morning and there's a flock of say thirty of them waddling around and chatting to you. Their poo is a bit of a mess on the outfield, and we're going to fence off the square to keep them off. Foxes can be a minor irritation too, but there's no lasting harm."

Adrian mentions that one slight downside at present is that there are no off-ground net facilities, so match day netting has to be done on the square, a limitation somewhat to pitch rotation, but certainly not unmanageable. This is quite normal for a county outground, but ambition for more first class fixtures will no doubt heighten efforts to get netting the other side of the boundary.

Irrigating the square, as for many an outground, has been a tedious process of hand-held hose work from an off-ground water mains source. The introduction of a new piped set-up, fed by an underground tank filled with rainwater collected from the new facilities building, will change this radically. Adrian and Paul were this very day tidying up after trenching and laying 25mm piping beneath the outfield to the edge of the square.

At the pitch end, there's a quick Geka head coupling for hose connection, and gone will be outfield work hampered by trailing hoses, not to mention the inefficiencies of long distance irrigation.

"You just switch the pump on and get pressure to a walkabout hose from the underground tank," said Adrian. "Having a central point also means we can run additional hosepipes if we want."

The trenching and pipe-laying were done entirely by Adrian and Paul. Today was the final 'cover up' day. Next spring, it will be 'invisible'.

Other eco characteristics are part of the new Beckenham, Adrian tells me. These are a wildflower area that will cover a bank, behind the new building, that's very difficult to cut and keep trim, and a living wall to soften the side aspect of the new building. Imaginative and practical are words that spring to mind. They will certainly be pleasing on the eye to spectators.

The ground drains well and there is no slope to speak of. Grass cover - outfield and square - is predominantly ryegrass, but Adrian says he is gradually changing the outfield to fescue as part of the plan to mirror Canterbury conditions.

"Finer grass with higher drought tolerance, and just better for cricket generally is what we're after," says Adrian.

Scarifying, overseeding with fescues and the application of organic fertilisers is what they had been doing in the weeks since the end of the 2016 season. Adrian says they've also been trying also to reduce the pH to lessen worm activity.

"The building up of fescue content is an ongoing process, season-by-season," he said. "The unusually dry conditions this autumn have not been helpful, but there are signs of good germination now."

Autumn refurbishment also includes Graden work on the square, usually by contractor, but the aim is to get a machine for use in-house at Canterbury and Beckenham. The club already uses a newly acquired Verti-Drain at both venues.

Adrian has a major aeration programme marked out for the whole of the outfield. "The aim is to 'shatter the pan'," he said. "The profile of the soil is pretty hard due to compaction and I'm about to arrange machine hire to ease it. Ideally, I'd like to complete the job before winter sets in. In earlier days, when the ground belonged to Lloyds Bank, there were hockey and football pitches where the outfield now is, and this has had a long-term effect that's not conducive to the level of cricket Kent wants to see played here." 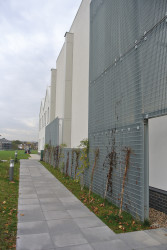 It will always be cricket only at the County Ground now, and the outfield, though looking superb, needs a bit of a shake-up. Adrian felt that a Verti-Quake would do the job for him. He had received the okay from Canterbury, and was just waiting for machine availability. He aimed to supplement this with further use of the club's own Verti-Drain.

"It's just been frustratingly too dry since the end of the season to carry out our aeration programme," said Adrian. "I'd like to see a lot of late autumn rain, so we can get on with it, then a sharp, cold winter with plenty of frost to kill off the nasties. Touch wood, Fusarium has never been a notable issue for us here."

All spraying at the ground is done in-house with Adrian generally in charge, though there are now three others in Kent's ground team with spraying qualifications who contribute, if need be. This is a good example of the club pushing forward with training. Fertiliser application is exclusively by spray because, as Adrian puts it, "it gets into the grass plant more quickly and the results are apparent in no time."

Adrian has a cricket connection, and a significant one. A few days earlier, his younger brother Nigel, a Kent cricketer of note in the 1990s, had been standing in the Australia-South Africa Test in Perth.

For some years now, Nigel has been on the ICC panel of elite umpires and officiates around the world in tests, ODIs and International T20s. The two of them occasionally swap cricket stories and observations, and Adrian says he chats to Nigel about grounds around the world. He gets particularly useful feedback when Nigel is on county duty here in England. There cannot be many brotherly duos that have achieved excellence in two completely different areas of a sport.

The County Ground is sixty miles from Kent's Canterbury HQ and it makes good business and cricketing sense to establish a well-appointed, spectator-friendly venue that can tap into a keen and extensive following at the London-end of the county.

As we go to press, fixtures for the 2017 season have yet to be published, but NatWest T20 Blast and Royal London One-Day Cup games are certainties, with the potential for a 4-day Specsavers County Championship match.

Kent will hope that a late season surprise defeat won't reoccur and dash promotion hopes, as it did in 2016. A crumb of comfort was that Northamptonshire's Ben Duckett scored a record 208 to earn victory and gain a place in England's winter touring squad. The County Ground, Beckenham is likely to notch up many a record - with bat and ball - as it gets established as Kent's number two ground.

Viewers of live cricket on Sky Sports will be familiar with the TV ad showing England's Joe Root at the crease and the Dachshund chasing after the ball. It was actually filmed at the County Ground. It will be no surprise to see cameras there again in the not too distant future capturing what Adrian Llong says is the best sight in sport.