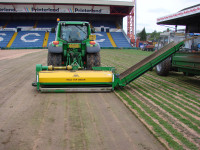 Carl Pass, MD of Sheffield-based Premier Pitches, took delivery of the Mark II series FTM 2500 in April and says that already it's made a massive difference to his business.

"As a contractor, time is of the essence. We need to be in and out of sites as quickly as possible, particularly at this time of year, but we also have to do an excellent job.

"It's not all about speed, it's the quality of the finish as well and now I can achieve both."

With the new machine - the largest Koro FTM yet - in his fleet Carl estimates that work rates are about 30% more efficient.

His first job with the new machine was at Chelsea's Training Ground at Cobham. Other pitches where Carl and his team have worked with the Koro include Bristol City; Manchester United; Old Trafford; Sheffield Wednesday, both at Hillsboro and at Middlewood Road Training Ground; Stockport; and Edgeley Park.

Already Carl is convinced that the 2.5 metre machine is the way forward for contractors and, he's so impressed with the FTM 2500, that he's ordered another.

One of the new features on the 2.5 metre machine is a deflector plate on the elevator that prevents material from falling off the conveyor belt.

Carl has had this guard retro fitted to his Mark I Koro FTM machines and would advise anyone else who has this machine to have it fitted. "It makes a huge difference to the quality of the finish."