It's Kubota all the way for the Mere Resort near Knutsford, Cheshire, where Course Manager John Quinn is in no doubt about the right choice of horsepower for a multitude of turf preparation tasks. 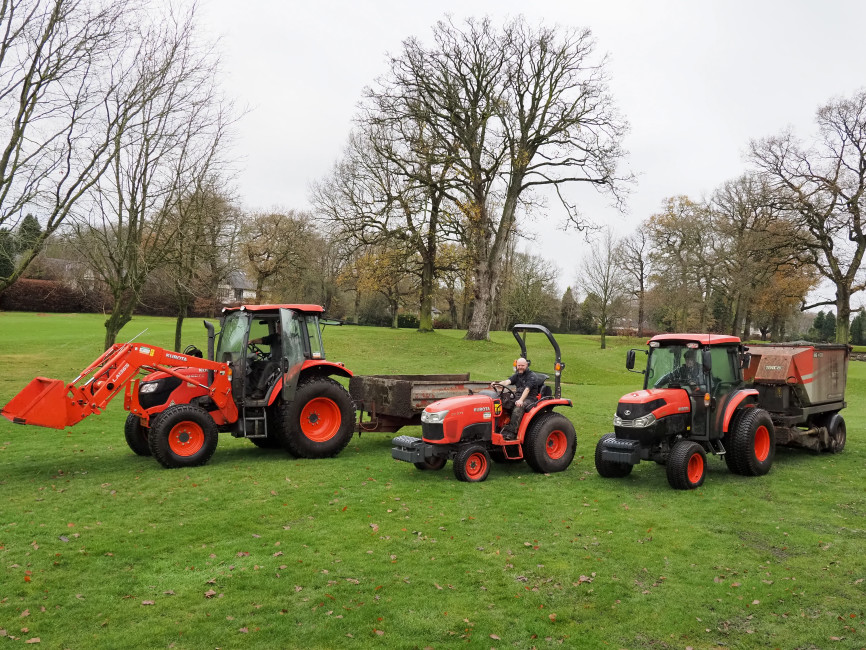 The 7003yd par 71 course is highly popular with hotel and corporate guests as well as members, presenting a variety of challenges from its James Braid-designed heathland and parkland setting. It also plays host to the Mere Trophy, a popular amateur tournament, won in the past by Ashley Chesters and Ernie Els.

John has been at the resort for five years, quickly rising up the ranks to be Course Manager, and as part of his upgrading plan looked to replace some older tractors.

"We already had an L Series and its performance and durability made the choice of Kubota a 'no brainer'," he says. "I decided what we needed was a small, medium and large tractor, and Kubota had the models to fit the bill, which were delivered in the summer of 2019."

For power in a compact package and Kubota's exclusive Bi-Speed turn for manoeuvrability, the 37hp ST 371 is ideal for greens and tighter areas but is also handy with a trailer and has the muscle to pull a small slitter.

The 50hp L2501 is a real workhorse, tackling leaf clearing duties with a Trilo vacuum and aeration with the Vertidrain.

"Its predecessor was a great tractor and to be honest would still have done more hours, but it made sense to have the latest model as there have been significant improvements. The greenkeepers all find the new L series really easy to use as it's a lot smoother to operate, and the pto engagement is more straightforward."

Big jobs are down to the 74hp M4072 which is fitted with a Kubota LA1365 loader, which pulls a high capacity Omarv flail collector and tackles all sorts of materials handling work from loading seeders to top dressers.

"Having the choice of tractors means that we can handle all the implements that we need, or can use them together - for example with a chipper on the ST blowing into a trailer behind the M4072, which still leaves the L2501 to work on the greens," explains John.

"We've specified pallet forks as well as a bucket for the loader to get the most out of its materials handling capabilities."

Also picked out by John as a good feature is the drop hitch, which makes hooking up big implements much easier. "The tractors are really well thought out - there's even a slot for a spare hitch which means that you have it with you when you need it rather than leaving it on the shelf in the workshop!"

Fuel economy comes in for praise too - even when working with implements requiring high revs such as the flail collector.

"You just have to compare the savings made from having the tractors - our pto-powered blower is considerably more economical than the petrol blower it replaced."

All servicing is carried out in-house and John reports that the tractors are also good to access and work on.

"We've not needed any parts yet, but our dealer GGM Groundscare is local and offered us very good support as the tractors were delivered and set up."