0 Kubota horsepower is a winner at high profile equestrian events

Kubota is providing the horsepower at a series of high profile equestrian events this year and is already proving to be a winner for the site team. 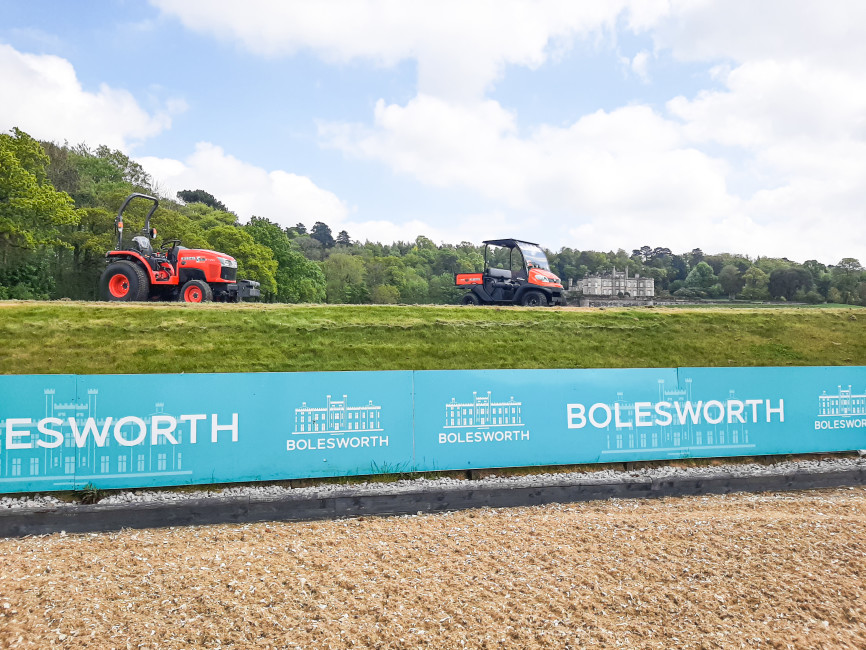 Bolesworth Events organises a series of top level showjumping competitions in the beautiful surroundings of Bolesworth Castle, Cheshire in the summer, with the highlight being the Dodson & Horrell Bolesworth International Horse Show on 7-11 July, a five day festival which combines thrilling competitive action with entertainment, fabulous shopping and feasting on fine food and drink.

The action then moves indoors for the Liverpool International Horse Show over the New Year, a glittering, festive send off to the equestrian year.

Kubota dealer Hughes Bros of Oswestry, Shropshire, is a sponsor of these innovative equestrian events, providing tractors and utility vehicles to the Bolesworth site team.

Bolesworth Events Site Manager Will Hutchinson-Smith and his team have already had chance to try the machinery out, at a four-day national showjumping competition in May.

"My team looks after the entire site from the arenas to the infrastructure and car parks," he explains, "so it's been great to have the Kubotas and we've really put them through their paces."

As well as harrowing and grading the vast 102x62m all-weather arena which has its own moat, the smaller tractors are used for moving showjumps.

"We've been very impressed," says Mr Hutchinson-Smith. "The compact tractors have plenty of power but are very agile, which is important when you need to get in and out of the arena quickly. We even had to use one to tow out a catering concession due to the wet conditions at our first event and it pulled it out with no hesitation."

He adds that the tractors are also straightforward to drive and work with for the whole team.

The RTVs are kept busy moving staff, tools and equipment around the site, with the RTV X-1100 hitching up a trailer when even more carrying capacity is needed.

"They are so useful with their hydraulic tipping beds - we're able to move materials such as woodchip around easily and there's plenty of power and grip when we need to get off the estate roads," notes Mr Hutchinson-Smith.

He's now looking forward to using the tractors and RTVs as the action builds towards the Dodson & Horrell Bolesworth International Horse Show in July, which attracts the leading names in showjumping.

"They're an addition to the team that we can really rely on, and we've also had a fantastic level of support from Hughes Bros, with Richard Hughes always on hand to advise and help us get the best out of them," Mr Hutchinson-Smith adds.