Sandy Bay in County Antrim was once a beach leading onto the Irish Sea, but is now the home ground for Larne Cricket Club. Chris McCullough took his bucket and spade to meet Head Groundsman Trevor Dempsey, a lifelong member of the club, to find out more about this unusual location. 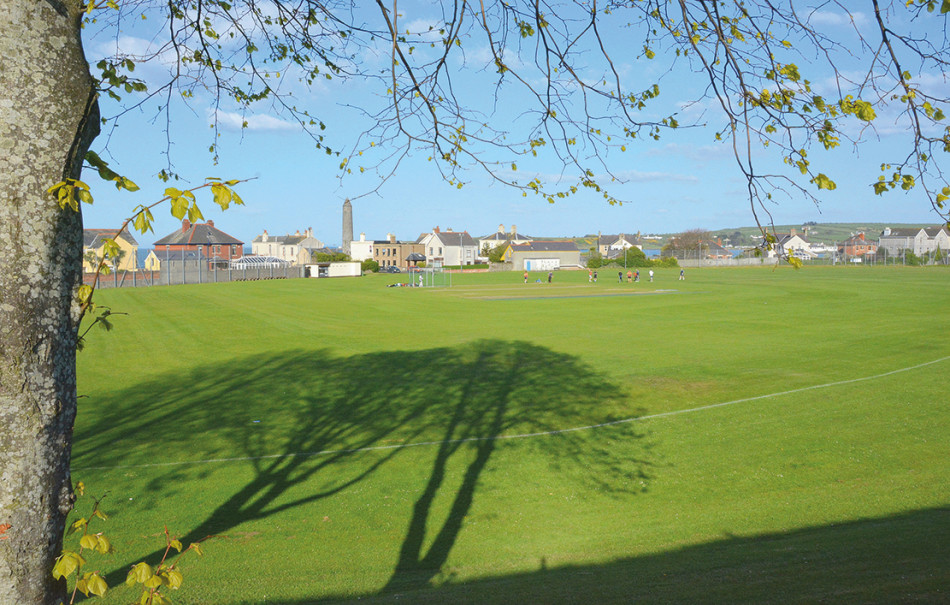 Throughout the UK, there are thousands of volunteers whose passion for sport and groundcare sees them give up their free time during the week, and at weekends, to ensure their sports facilities look the best.

From small sports clubs to the larger corporate ones, there is a network of people who turn up to ensure the grass is cut, the mowers are functioning properly and that the linemarkings are straight.

This vital role of the volunteer is highlighted at Larne Cricket Club in Northern Ireland, which is based on the east coast of the country looking across the Irish Sea to Scotland some twenty-odd miles away.

Larne Cricket Club was founded in 1939 and currently fields two senior teams and two junior teams in the Northern Cricket Union of Ireland. The First XI currently play in the NCU League Section Two and the Second XI in Junior 5.

The club's main ground is called Sandy Bay which is located at Bay Park in the harbour area of the County Antrim town and is overlooked by Ballylumford power station; Northern Ireland's main provider for over half of the province's electricity. This is where practices take place and where the firsts and seconds both play their home matches.

Tucked away just metres from the Irish Sea, Sandy Bay can be quite a pleasant location to watch or play cricket, especially when it is boosted with glorious sunshine, which is not necessarily native to the area! 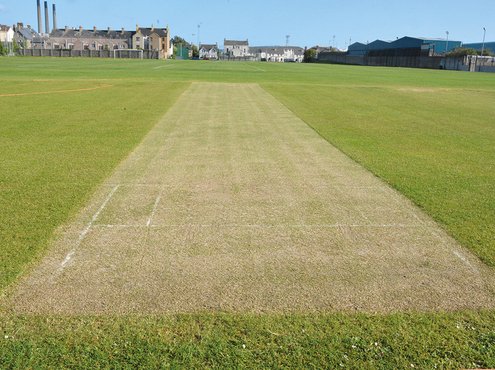 However, the club can be quite diplomatic when it comes to playing games and publicly warns visiting players to be aware that a bracing northerly wind is a possibility and to ensure that a sweater is always in their kit bag.

Indeed, when the ground's history is examined, it can be concluded that this current close proximity to the sea means it was actually a beach which was reclaimed from the ocean at some stage in its history.

As the name suggests, Sandy Bay has got a sand base which is well renowned for drying out exceptionally quickly. This has helped the club stage games in the past, following a torrential downpour, something which would not have been possible at other clubs.

In total, there are eight acres of playing fields at Sandy Bay which is bordered on three sides by residential housing and gardens. Located within metres of Larne Promenade, the ground is used for a range of sport and activities, including football, as well as cricket, launches and celebratory events.

A project is currently underway to replace the park pavilion, which was built in 1959. This new building will provide changing facilities to meet current and anticipated needs and will complement facilities to enable regular use by the local community.

Although used by the cricket club, the grounds are owned by the local Mid and East Antrim Borough Council and sit adjacent to the town's leisure centre.

The club is tasked with maintaining and marking the cricket square, with the ultimate responsibility falling to local man Trevor Dempsey, who is both the head groundsman as well as a player in the cricket team. 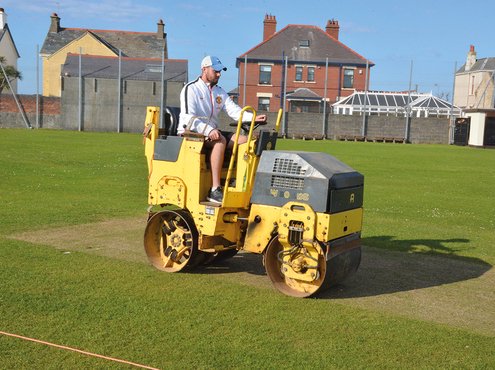 Trevor has seen many changes during his tenure at the club, but one thing that remains a constant is the superb playing conditions of the grounds.

Even though Larne is one of the smaller clubs in Northern Ireland, there is a huge passion for the sport and their facilities by all of the members.

Trevor said: "I have had the pleasure of carrying out the role of head groundsman for the past fifteen years. I am a lifelong member of the club and first took an interest in looking after the ground probably when I was in my late twenties."

It's been a real fascinating journey for Trevor in educating himself how best to look after the grounds at Sandy Bay specifically for 'his' cricket club. All of his knowledge has been self-taught; "which sometimes can be the best way to learn," he says.

"I have had no formal training at all. My entire knowledge has been gained by knowing and playing on the ground, and from people helping me over the years by showing me things that could improve the standard of pitches here."

"As you can imagine, being a small club, we have a small budget for any work carried out on the grounds. Basically, we must make do with what we have."

"Around six years ago, the budget would have been a lot bigger when we had five teams but, at the moment, the club is on a rebuilding phase. We work very closely with our local council who help us out massively with loam orders and other machine servicing costs."

"The total acreage of the grass area is eight acres, but the cricket field is made up of around three acres. The rest is a football field and grass areas." 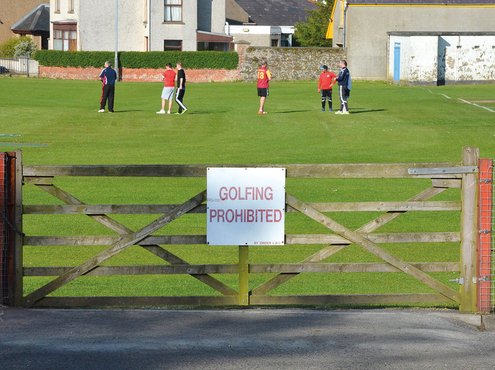 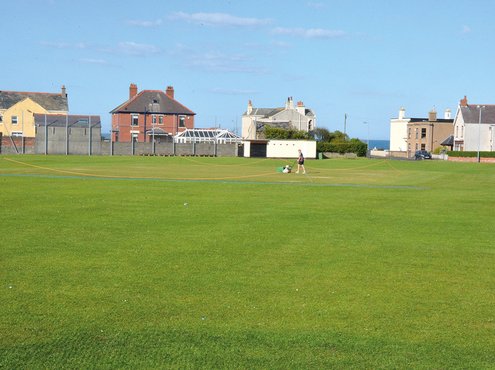 With its 'seaside' location Sandy Bay suffers from the 'weather' which, on occasions, can be harsh and quite challenging for groundsmen, players and spectators alike.

The grounds lie close to the terminal for the ferry that transports vehicles and passengers from Larne over to Cairnryan in Scotland.

"Obviously, with the ground being beside the sea, we get high winds at times, but this is great for the ground as it dries out really quickly after any rain. The winds do affect games sometimes, if too strong, but we are used to it," said Trevor.

Strong sunshine can also be a major factor in the condition of the grounds, particularly so as it has a sandy base, "but this isn't generally too much of a problem in Northern Ireland," comments Trevor ruefully.

Larne Cricket Club has one artificial wicket as well as a total of nine grass wickets, but it's the grass ones the players prefer these days.

"We have one astro turf wicket but, to be honest, it doesn't get used very often. The players always train on the grass," said Trevor.

With the help of some of the other players, Trevor maintains the ground on a weekly basis during the main playing season.

"We normally cut the grass on the square to around ten or eleven millimetres, and around four millimetres on the match pitch when the grass is growing at its peak."

"The pitches are played on once a week and we cut the square once a week as well to coincide with that. Every two weeks we give the square a quick scarify, just to keep it clean and provide a better surface to play on."

"We have a number of machines to hand that we can use on the grounds. There are a couple of sheds that we store the machinery in."

"I use the Allett Buffalo 24 to cut the square at the ten or eleven millimetres height. The other mower is slightly wider and we use that for the lower grass heights on the playing pitches," Trevor said.

"The scarifier is a petrol driven Sisis Trio Rotorake, which I have to say does a really good job for us. We also have a Bomag roller that we use regularly to roll the surface." "All our machines are quite old, but we try and look after them the best we can. The council does help us out with other machinery should they be required for other jobs."

It may be a small club down at Larne but the guys there like to maintain the grounds and have them looking their best at all times, but particularly so when other clubs come to play at Sandy Bay.

"Presentation ranks very highly with us," said Trevor. "When a team comes to your ground, the first thing they look at are the facilities. I always feel that by having a ground in good condition it also helps the teams play better."

As the season draws to a close, Trevor and other members follow an annual routine in preparing the grounds for the winter closed playing period. Some of the bigger jobs, including hollow tining, are carried out by either the council or outside contractors.

Trevor said: "Firstly, we cut the square to the lowest setting of about two millimetres. Then we scarify the entire square in four directions, making sure we cover every inch of the surface."

"After this, the ends get hollow tined. This process is carried out to try and reduce the saddles that have risen up over the year. Finally, we seed and topdress and then dragmat in," said Trevor.

In order to try and keep the grounds in tip top condition, signs have been placed around them to prohibit anyone playing golf.

Pests are not a problem in Sandy Bay but, with it being a heavy built up residential area, normally there could be a problem with dog waste, but not at Larne. "In all my years looking after these grounds, I have never once had to pick up any dog waste," said Trevor. "There is a good mutual respect for the grounds from local residents, of which I also am one, as well the club members."