If there has been one fundamental difference in looking after sports grounds in recent years, particularly top end high profile sports arenas and stadiums, it is the innovations to help maintain good healthy grass cover, especially during the winter months.

Any combination of these aids has helped groundsmen in stadium environments, However, the one, that has probably had the most impact is lighting rigs.

Lighting systems to help promote grass growth have been available for a number of years now. Stadium Growth Lighting (SGL) were the first to bring this technology to the fore when they produced a set of lighting rigs for the Philips Stadium in Eindhoven, Holland back in 2004.

Since then, SGL have supplied lighting rigs to well over ninety stadiums worldwide, of which thirty-five are based in the UK.

The technology has come a long way since the prototypes and early models. Now, it is possible to purchase rigs of various sizes, have different bulb wattage ratings, plus a whole wrath of computer software, hardware and support systems to aid their use.

Currently, there are two companies marketing lighting rigs, SGL and MLR (Mobile Lighting Rigs as developed by Norwegian Company, Mobilt Drivhus AS). Both offer similar sized rigs and lighting configuration, and both use sodium light bulbs that require three phase electricity supplies to power them. Consequently, these systems are neither cheap to buy or to run.

For example, SGL now offer a more flexible lighting rig systems which is easier to set up and move. The lamps are positioned 2.5 metres above the turf surface, high enough off the ground for groundstaff to work under.

SGL has also developed a set of Grow Lab Analysers that monitor a number of environmental factors to help control and run the lighting rigs.

The sodium bulbs used in the rigs come in 600 or 1000 wattage, which give out a lot of radiant heat that is intended to warm up the soil profile, recreate sunlight and, thus, generate strong grass growth. When the lights were first trialed at the Stadium of Light in Sunderland, head groundsman, Adrian Partridge, recorded that the soil temperature under the lights was raised by three degrees centigrade.

In 1962, a new light source was developed in the form of LED (Light Emitting Diode).

When a light-emitting diode is forward-biased (switched on), electrons are able to recombine with electron holes within the device, releasing energy in the form of photons. This effect is called electroluminescence and the colour of the light (corresponding to the energy of the photon) is determined by the energy gap of the semiconductor. LEDs are often small in area (less than 1mm2), and integrated optical components may be used to shape its radiation pattern.

Modern incandescent bulbs are not energy efficient. Only four to six percent of the electrical power supplied to the bulb is converted into visible light. The remaining energy is lost as heat.

So, in recent years, the development and growth in the production of LED lights has moved on substantially.

Plant growers are interested in LEDs because they are more energy-efficient, emit less heat (which can damage plants close to hot lamps), and can provide the optimum light frequency for plant growth and bloom periods compared to currently used grow lights - HPS (high-pressure sodium), metal-halide (MH) or CFL/low-energy.

Currently, LEDs have not replaced these grow lights due to their higher purchase cost. That said, a lot of growers are exploring the possibilities of utilising the technology.

However, this may be about to change as one company, Qudos Growth, headed up by energy consultant, Mark Raper, (who has been working with LED lighting systems for a number of years), has seen the potential to produce LED lighting rigs for sporting venues.

He has successfully designed and managed a number of projects where he replaced conventional lighting with LED technology. For example, 400w sodium/metal halide low bay light fittings that were operating at around 480w after losses, were replaced with 100w LED lights with wireless dimming which offered savings on running costs of over £500 per month. This saving alone would see a return on the investment in three years.

Mark began more research into the benefits of LED lighting and became aware of their use in the horticultural industry, but it was a trip to Leicester City Football Club in October 2011, to fit some heaters in the dugouts and directors boxes, that he ran his idea past the club's head groundsman, Ed Mowe.

Ed was already using two SGL small rigs but, like most groundsmen, is always open to new ideas. So, after several conversations, Ed agreed to trial one of the prototype LED lighting rigs at the club's King Power Stadium (formerly the Walkers Stadium) to see how it would perform.

During this period, Mark enlisted the help of his father-in-law, Steve Blackman, a practising agronomist. Between them, they spent time developing and improving the design of the rig, with Ed providing constant feedback.

The prototype rig at Leicester consists of fifty-four LED strips and currently operates at around 0.9Kw. The LEDs are focused between 440-460nm (blue) and 650-670nm (red) between the PAR (Photosynthesis Active Region) spectrum of 400-700nm.

The lights can be programmed to come on at set times, have a sunrise and sunset programme, and the wave length of the red and blue spectrum can be altered to offer different growing strategies.

The height of the lights can be raised and lowered, by remote control, between 500mm-1000mm. A battery powered motor enables the rigs to be moved remotely, which can be set at predetermined times to prevent yellowing of the grass under the wheels. Due to the fact that LED uses less energy to power, the cost of running the rig has been equated to be ten times cheaper than sodium lights, based on current costs. 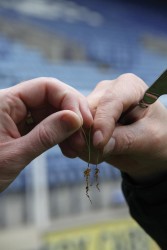 Ed has used the LED lighting rig to assist seed germination on his newly renovated pitch, in an area that was typically slow to grow compared to the rest on the pitch due to shading. The sodium rigs haven't been used due to the heat factor. The new rigs have been successful in promoting grass growth and, compared to areas having no artificial light, root growth is more pronounced.

Meanwhile, whilst the trials were going on at Leicester, in deepest Wales, Keith Exton, head groundsman at the SWALEC Stadium was conducting his own trials for Mark - under his hover cover!

Mark was introduced to Keith Exton at Glamorgan CCC by Mark Atkins of Soil Harmony, the link being that he is a sports agronomist who advises both Leicester City and Glamorgan CCC. 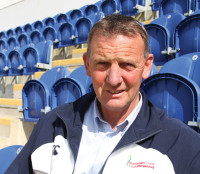 Keith had already been exploring using LEDs and had been trying, unsuccessfully, to locate someone prepared to take up the challenge, so Qudos Growth seemed a good fit.

Between them, Mark and Keith decided to install the system to the inside of the Stuart Canvas Hover Cover. Mark came up with a design utilising eighteen 1200mm 36 LED linear strips. Keith had experienced organisations saying they would help, and then disappearing, so Mark was even more determined to deliver for him. Having a groundsman that already understood the system's potential was a bonus indeed. He kept in constant touch with Keith throughout the manufacturing process and, five weeks later, returned to carry out the installation, which took a day and half to complete.

The lights were being used on Keith's reconstructed wickets and, after a very dry start to the pre-season, the heavy and prolonged rain arrived, meaning that the covers were on more often than they were off, whilst preparation time for each wicket was severely reduced.

Even so, Keith's wickets have been receiving top marks from the umpires, and he believes the LED lights have played a major part in achieving these high scores.

The advantages of installing lights to cricket covers are as follows:

- The ability to grow grass and improve root structure on any particular wicket all year round
- Wickets can be prepared earlier
- Root structure is improved due to improved top growth
- Less irrigation
- Can cover a wicket on hot days without sacrificing light for photosynthesis
- Focuses the light in the primary plant response region rather in areas where the plant doesn't use it.
- Can be installed to existing covers, either hover or conventional roll-on roll-off

Whilst trials are ongoing, both Ed Mowe and Keith Exton predict a bright future for the system as they offer more flexibility, do not create unwanted heat and are cheaper to operate.

At today's prices, by replacing 1000 watts of HID lighting with 300 watts of LED lighting, just the power savings alone can pay for the entire cost of the system in less

than eighteen months. LED lights have a service lifetime of between five to seven years, with no maintenance or replacement lamp costs.

Mark concludes by saying; "Encouraging results have been seen at both Leicester City and Glamorgan CCC but it is ever evolving. The hardest thing is proving the technology is more efficient in plant response in relation to sodium. We know it is cheaper to run. There is no argument from us that sodium works, but we believe, and will prove, that LED is the future. We understand this is new and different and someone has to be the first."

"We are engaging Labosport for third party verification that the product works. Labosport are affiliated to FIFA and UEFA for testing, as well as the ECB. We are also working with universities and plant physicists on proving various theories."

The benefits seen during the short trials are:

- Increased rooting of the grass sward
- Only adding heat as required
- Lighting rigs can be left in situ as long as required, meaning areas such as goalmouths should never be bare
- Less irrigation
- Focuses the light in the primary plant response region rather in areas where the plant doesn't use it
- Low running cost compared to sodium lighting
- Variable height for intensive repair
- No plant shock due to sunrise sunset feature

"We plan to provide complete rigs, retrofit existing rigs that clubs have (as long as they have ownership), and hire out to lower league clubs and non league when required.

"All grass sports can benefit from this technology and we are willing to work with anyone on a concept, be it football , cricket, rugby, golf, horseracing, and everything in between. In addition, any design we have can be adapted for an individual club's needs."

"At this stage, my thanks go to Pitchcare for bringing the system to the attention of the industry, and to Leicester City FC and Glamorgan CCC and their forward thinking groundsmen."


The major benefit of utilising LED lights is the long term cost savings when in use.

The above calculation is based on a kw/hr cost of £0.066p, and the lights were on sixteen hours per day for fifty-two weeks.