by John Handley
in Chemicals & Fertilisers, Conservation & Ecology, and Industry News
on 03 Jun 2015

With the arsenal of pesticides seriously diminished in recent years, just what is still available and what, if you have it in your store, will it actually control? John Handley, Maxwell Amenity's Technical Manager, suggests not much, and that understanding the physiological requirements of plants better may actually help us all to tackle those problematic weeds

I approach legislation in the same way that I approach medicine: I don't like it, but I have to believe that it's ultimately for my benefit. That being the case, let's get the legislation out of the way and then we can tackle what the effect of it will be and the implications for how we manage our turf, in the short term and with an eye to the future.

The Directive includes a number of provisions aimed at achieving the sustainable use of pesticides by reducing risks and impacts on human health and the environment*. These include:

- the establishment of National Action Plans; compulsory testing of application equipment
- provision of training for, and arrangements for the certification of, operators, advisors and distributors

- a ban (subject to limited exceptions) on aerial spraying
- provisions to protect water*, public spaces and conservation areas
- the minimisation of risks from handling, storage and disposal
- the promotion of low input regimes (including Integrated Pest Management (IPM))*

Progress is to be measured through the use of 'risk indicators'.

I've highlighted (*) the sections that this article will focus on. It won't have escaped the attention of many professionals within the amenity sector that our arsenal of pesticides is being diminished. Many people hold up their hands in horror at the mere thought that their right to manage their facility, in the way they've always done, has been removed by the bureaucrats in Brussels, potentially threatening the livelihoods of businesses in the UK and affecting the quality of the playing surfaces of our sports facilities.

Another interpretation of this is that research undertaken by the national agencies of the respective countries within Britain indicates that levels of pesticides, deemed in the long-term to be potentially damaging to our health, are being routinely found within water bodies; and that, by changing the law on what quantities and types of Active Ingredients can be used, as well as encouraging users to think about cultural and biological alternatives, we can fulfill our obligation to maintain a healthy environment, now and in the long-term.

Either way you view it, it's the law, and the implications on Active Ingredients such as Dicamba mean that selective herbicides that many managers rely on annually for effective weed control will be changing over the next year. Many of the herbicides that contain Dicamba are being phased out. The ability to purchase them will end on the 30th June 2015 and they will no longer be able to be applied after the 30th June 2016, the statutory use-up period. 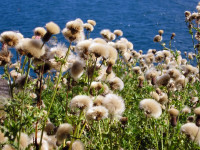 What are the alternatives?

We can use the model of Integrated Pest Management (IPM), to review our strategy and create the solutions to the problems that we're left with. Taking a broader perspective that may encompass a larger area can help us define how the problems occur, and help us define how we can control them. Understanding the physiological requirements of plants can help us reduce the circumstances that favour weeds and help us understand what environment our desired species requires.

It may even lead us to exploring other cultivars or species that can thrive.

Many of the weeds that we apply selective herbicides to weren't a problem a hundred years ago. Prior to the Haber-Bosch process, nitrogen was only available to plants in limited amounts, although it makes up about 78% of our atmosphere. We've significantly changed the amount of nutrients that are available and cycling through our environment.

Sulfur is trapped in coal, but the industrial revolution released this sulfur, by burning it, into the air where it reacted with water and oxygen to form sulfuric acid. Sulfuric acid is a strong acid. It ionises completely to hydrogen ions. This created acid rain with a pH below 5.0 which went on to damage organisms such as crops, trees and mosses. 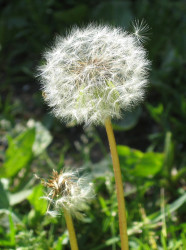 Prior to the industrial revolution, the trees were seen as clothed in mosses and lichens. This can still be seen in areas with good air quality in the UK, e.g. West Wales, Northern Scotland. However, over time, these mosses and lichens were killed off, particularly in cities where the air quality was poorest. The Clean Air Act changed this and we are now seeing a recolonisation into our cities of mosses and lichens. However, the species that are colonising are the ones which prefer nitrogen; an example of this is Leafy Xanthoria (Xanthoria parietina), indicating that the availability of nitrogen is having an effect on our environment.

The availability of nitrogen within a grass sward means that certain species which are able to capitalise on this abundance will proliferate, and they may not be the species that we want, e.g. Creeping Thistle, Broad-leaved Dock, Spear Thistle and Dandelions are all indicators of a high nutrient status. These can be effectively 'starved out' over time by ensuring that these areas aren't fed and that the clippings are collected and removed to an area that can be enriched.

An example of this might be to think about where the arisings are placed after golf greens have been mown? If you are gradually enriching an adjacent area, you're storing up problems in the form of plants that may prove difficult to control in the future. Prevention is better than cure, therefore nutrient application and location are key to targeting a particularly competitive group of weeds. Likewise, ensuring that the seed that you are buying conforms to the highest standards will prevent you potentially bringing problem plants in. Reputable seedhouses routinely check that the percentage of weed seed is minimal. However, once weeds are established, we need to think about methods to control them.

Grass has evolved with a growing point that is below the height of herbivores. This enables the plant to be regularly mown whereas other species are apically dominant and intolerant of mowing. Species that are ephemeral and don't have a root system that enables them to store nutrients can be easily eradicated by removing the top growth, e.g. Common Groundsel. Many of these species occur very quickly when the soil is disturbed, which is why it is important to gain control of these weed species before they become entrenched.

The amount of root material is an important indicator of how persistent particular plants can be, perennial species spend time becoming established before committing to a stage in their development which results in their multiplication. It is worth regularly surveying areas to identify what species are present and potentially might cause a problem in the future. It might not be necessary or desirous to eradicate every last individual, but defining what constitutes a population, which is a trigger point for action, should be defined as part of the monitoring process.

Physically cutting the weed plant before it has an opportunity to seed, by using a strimmer, mower or topper, can't harm the grass plant, but eventually weakens apically dominant species. The location of these species, and what they offer as a structural element, should be considered: a perfectly cut area of grassland does not constitute effective management or provide interest for the people using it. Resilience is built into systems by ensuring that a diversity of different species can occupy the available niches. A system becomes correspondingly vulnerable as the diversity diminishes.

There are species that grow too low down within the sward to be controlled by this method, these are the weeds that can be classically thought of as 'turf grass weeds'. These are species such as Clovers, Daisy, Plantains and Speedwells, along with other plants that can grow and set seed below the height of the mower.

Again, understanding plant physiology can help us understand that some of these are indicators of particular conditions which we can alleviate and reduce their influence. For example, Plantains and Knotgrass are indicators of compaction commonly seen in goalmouths and centre circles of football pitches. Alleviate the compaction with a verti-drain and overseed the area and the problem will disappear, but will reoccur as compaction becomes an issue again.

Biological control is a developing area and is an extension of an extensive understanding of the problem plant. Examples of this are Cinnabar Moth caterpillars being used to reduce the problem of Ragwort or the potential introduction of a Pysllid, a type of invertebrate to help manage populations of the invasive, non-native Japanese Knotweed. Use of a biological control for turf grass weeds is unlikely to be as effective as a selective herbicide simply because of the efficacy currently experienced with pesticides. 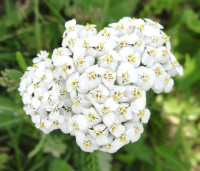 What weed am I trying to control?

Knowing precisely what type of weed or weeds you are trying to control is fundamental to effective control. Some species are more susceptible to particular herbicides than others; both Yarrow and Speedwells are notoriously difficult to control. Selecting and combining herbicides that operate within the plant in different ways reduces the incidence of resistance and improves efficacy. This also helps target a broader range of species that can be controlled.

Where is the plant growing?

Herbicides that have been developed for use within turf grass are characterised according to the Crop Hierarchy into two distinct categories. These are as follows:

Managed amenity turf: Areas of frequently mown, (i.e. mown at least once a week) intensively managed turf, including fields being used for turf production. May include areas for public use, including all types of sports turf, golf greens, tees and fairways. Note: prior to June 2004, fairways were included under Amenity grassland.

Amenity grassland: Areas of semi-natural or planted grassland subject to minimal or non-intensive management. Includes areas that may be accessed by the public, such as golf roughs. May include airfields and predominantly grassed railway embankments and roadside verges.

May be floristically rich and irregularly managed so that plants may flower and set seed.

Pesticides are approved for use within these specific areas with the exception of Extensions for Authorisation for Minor Use (EAMUs), formerly known as SOLA's or Specific Off-label Approvals. This information will be contained on the label which is likely to be accessible from a webpage. This is statutory information and, therefore, must be adhered to: the pesticide can only be applied on the area for which it has been approved.

What is the most effective herbicide that I can use?

Turf managers generally want to control a broad range of species and they are not all susceptible at the same time. As a rule of thumb, turf weeds are best controlled when they are growing rapidly, but well before they flower, typically in May and June.

To obtain the most effective control, the herbicide must be applied and left on the leaf for at least three days before it is mown, otherwise you are simply removing the herbicide with the clippings. Follow the label recommendations closely and, where rates of herbicide and water volume vary, think about the best way of ensuring the herbicide comes into contact with the plant and has an opportunity to absorb it.

Adjuvants are often incorporated into the product to help enhance the effect of the herbicide and, on occasions, it can be beneficial to add an adjuvant.

Table 1 provides a list of herbicides for weeds commonly occurring within turf and indicates which weeds they can be used to control.

Use plant protection products safely. Always read the label and product information before use.