by Izzy Cutler
in People, Football, and Industry News
on 26 Nov 2019 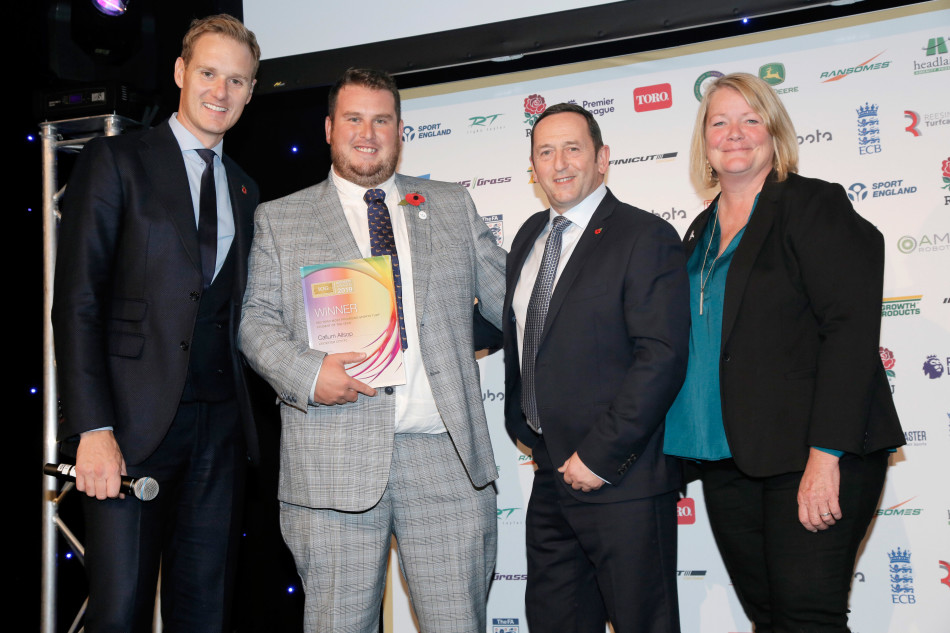 Having worked in the turf industry for 10 years, Callum was recognised for his dedication to the industry and education. As well as leading a team of nine as head groundsman at Leicester City Football Club's Belvoir Drive, Callum is also currently undergoing studies for his Level 3 in Sports Turf Management.

"I got involved in the industry volunteering at my local club at 14 and really enjoyed it," says Callum. "Since then, I've worked my way up and worked hard to get to where I am, and education has been a large part of that career progression for me."

"I strongly believe that in order to be successful, you have to make sure that every piece of work you do is always done to the best of your ability and that you should strive to learn more. Always ask questions and stay interested in what you're doing, and you will reap the benefits from that."

Callum was presented with his award by Reesink's national key accounts manager, Alastair Rowell, in front of an audience of 650 leading groundscare experts from the UK and Europe. And when it comes to gaining the benefits of winning the award, he wants to use his new platform to inspire others as well as improve himself.

"I think currently in the industry, more needs to be done to encourage younger people," he says. "That's why awards like this are important, because it's vital to raise awareness of the career and educational opportunities available to young people. In fact, at Leicester we're looking at the possibility of going into schools to speak about the careers in groundscare as many young people aren't fully aware of what they might be able to achieve in this industry."

"Personally, winning this award has been a great experience, and the highlight for me has been meeting so many top professionals in the industry. I hope winning this award at such a key point in my career will open up more opportunities for me in the future."

Marketing manager at Reesink, Rochelle Bedford, says: "Sponsoring this award is just another demonstration of ours and Toro's long-term commitment to the development of the industry and our investment in the careers of young people; a hugely important undertaking for us. It's wonderful to see Callum has achieved so much in his career already, and we hope the award helps him to progress his career further and inspire more young talent like himself."

The awards, which took place on 31 October at the The Vox at the Birmingham NEC, recognise leadership, innovation and outstanding achievement across every aspect of groundscare and highlight the progress of young, student grounds professionals. And Reesink and Toro are proud, as ever, to play a part in giving a platform to the best and brightest young people in the industry through the sponsorship of such an important award.