Billed as the 'Summer of Cricket', the 2009 international cricket season is the longest it has ever been. With the First Test against the West Indies starting at Lord's on 6th May, and the final One Day International (ODI) against Australia being played at the Riverside on 20th September, it is certainly a busy schedule. Throw in the Twenty20 World Cup - both men's and ladies - five Ashes Tests, and all the county fixtures, and groundsmen up and down the country are going to have their work cut out.

A cursory look at the fixtures shows that Headingley Carnegie and The Brit Oval stage the fourth and fifth Ashes Tests respectively, along with a host of ODIs. So, the pressure is on Andy Foggarty, Head Groundsman at Headingley, and The Oval's Bill Gordon, especially with the demands of spectators and the media.

The outfields at both grounds have undergone major renovation works that started last autumn and finished just in time for this season - through the worst winter in recent years!

Whilst cricket has taken a more realistic and spectator friendly stance to bad weather over recent seasons, with many ODIs continuing through showers, it is when the rain gets heavy and prolonged that problems can occur. The recent new drainage at Lord's showed what could be achieved with a bit of investment and has prompted the England & Wales Cricket Board (ECB) to provide major funding for ground improvements.

At Headingley Carnegie their new pavilion and tiered seating meant that, for safety purposes, the northern half of the outfield had to be dropped by 600mm. "Traditionally, Headingley had a one in forty slope towards the Kirkstall end," says James Westwood, the STRI's Design and Drainage Consultant in charge of the renovation. "We had to reduce it by 600mm because of the rake of the seating."

J Pugh-Lewis, who won the construction contract, arrived on site in October, stripped the existing turf from the surface with a Koro Field Topmaker, stripped the topsoil and stockpiled it on the outfield just south of the square. They began regrading, cutting into the northern half of the ground and removing 1,300 cubic metres of subsoil.

"We now had two gigantic heaps of soil on the outfield," James Westwood remembers. "They regraded the rest of the outfield, which had been quite undulating, before installing pipe drainage at four metre centres and pipe works for the new irrigation system." Trenches were dug with 450 metres of ducting to house cables for flood lighting.

"Normally, this type of renovation wouldn't have been a problem," James continues "but we had no option but to work in the closed season, and last autumn and winter gave us the worst possible conditions."

Headingley Carnegie has a very heavy clay loam topsoil sitting on almost pure clay. The contractors managed to get the topsoil back on but then, over Christmas and New Year, it was extremely wet followed by a freezing cold spell through January. 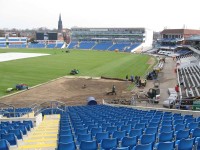 Head Groundsman, Andy Foggarty, knew that starting the project at that time of year could mean they would run out of time before the first practice matches at the beginning of April and the first fixture against Sussex on the 26th. "We knew that we wanted a reinforced turf, 40mm thick because it would need to be played on almost as soon as it went down," he says. "James chose Lindum Lokturf knowing that it was grown on a free-draining rootzone which met ECB requirements and, being fibre reinforced, would provide an instant stable surface that would not break up."

By March the topsoil was ameliorated with the Loksand to a depth of 60mm so that the rootzone material was compatible with Lokturf.

Talbot Landscapes, under contract to Lindum, laid 14,429 square metres of turf, which had been harvested in 'Big Rolls' 1.1 metre wide. The new surface was finished by the 8th April.

"The turf saved us," says Andy. "At one point it looked as if the new outfield wasn't going to get finished in time. Since then it's stood up really well. Before the first match we kept the grass quite long at 25mm and, in the area where the new grass butts up against the existing cricket square, we thought we might have a few problems. We put seed down and topdressed to knit the two swards together and it all came through."

Andy and his team rolled the outfield in various directions to get rid of any bumps and, by the run up to the first fixture, was hoping for a good downpour to see how the surface dealt with the rain. The law of sod meant that April was the driest and warmest in recent years; perfect for cricket but not for testing out the new drainage!

Meanwhile, in deepest Surrey ... According to Head Groundsman, Bill Gordon, as far as he is aware, the surface at the Brit Oval had not been relaid since 1845, however, it was the period during the war when the ground was commissioned as a Prisoner of War Camp, that adversly affected the surface. "The ground was turned into a POW camp in case we were invaded," he says. "In the event it never held any prisoners but, on a hot summer's day, you could see the marks all around the outfield where the fence posts had been put in. The surface levels had never been corrected." 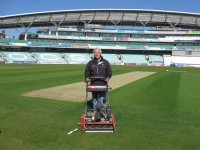 ECB funding meant that the outfield could be completely rebuilt rectifying any anomalies in surface levels and improving drainage at the same time.

"Drainage was not the main problem," said John Mallinson, Managing Director of J Mallinson Ormskirk Ltd., the company chosen to perform the design and build. "The Oval is built on silty, black soil, which we ameliorated, adding 3,000 tonnes of sand to improve the porosity. We then installed 5,000 metres of pipe drainage at three metre centres." At the same time, Lakes and Greens installed a new, computerised Rainbird irrigation system.

"Seeding the new outfield in the non-growing season was out of the question." said Bill. "It would have been too risky. You wouldn't have got an even coverage in time for the new season,"

Lindum's MD, Stephen Fell, took a sample of LT5 Ryetees turf, a rye grass, smooth stalked meadow grass, and fescue mixture to the Brit Oval for Bill's approval. "We recommended the LT5 turf as one that provides a dense sward that would allow a good ball roll as well as being able to put up with some hard wear," says Stephen. "This same mixture was also used at the Glamorgan, Lancashire and Gloucestershire grounds, although there it was supplied as a washed turf for rapid and strong establishment."

Once Bill had ordered the 13,000 square metres required, in big rolls, Mallinsons had to ensure that the ratio of sand and soil in the new rootzone would be compatible with that of the new turf. "We had to bear in mind what happened in Antigua over the winter, when the turf broke up and players' feet went through it," he says. "We needed a five sand, three soil ratio." 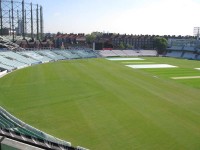 The last of the new turf, (avoiding those areas where the ashes of famous past cricketers, such as Jim Laker, were spread) was laid in the final week of February. Rooting was rapid and the team were practising on the pitch by the end of March.

"I'm full of praise for Mallinson's project manager, Richard Aspinwall," Bill continued. "He gave 100% and there were times during the reconstruction when they were knee deep in muck and bullets."

The new turf surface has bedded in well and held together. Bill has given it a light feed of fertiliser and he's verti-draining, when he can, between fixtures.

Perhaps the biggest accolade for the new outfield is silence. According to Bill, "not many people have said anything." That probably says it all.