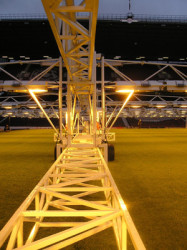 The result is a better and more reliable surface to play and train on during winter. Reseeding bare patches is also made possible, as the system provides conditions in which seed can germinate even in cold months. "This is a new concept in winter sports turf management," says John Hewitt of Hewitt Sportsturf, the sole agent for SGL lighting rigs in the UK. "It is more than just sticking lights on a pitch. It is total control system whereby measurements taken by mini weather stations on the surface, help the groundsman decide when to apply inputs such as water and fertiliser to optimise grass growth.

"In the UK light has always been the limiting factor in winter - but now it doesn't have to be. I think most of our top clubs will be using lights in future."

Good results across the UK

The system was first trialled in this country at the Stadium of Light, Sunderland, in 2004 where six units rejuvenated the shady south end.

At St James Park, Newcastle, four lighting rigs which have been moved across the pitch every 48 hours this winter, have eliminated the need to re-turf mid-season, saving the club £120,000.

"Grass never grows here in winter, and we were always on a knife-edge to see how long the pitch would last before re-turfing," says Newcastle United's stadium manger Eddie Rutherford. "We have never had a pitch of such consistent quality as we have now. Annual costs with depreciation and energy to run the lights, is around £64,000 - but this is cheaper than re-turfing. The lights have made a real difference to us." At Swansea's Liberty Stadium, where the rigours of rugby and football play havoc with the playing surface, three lighting rigs placed in a 'T' shape over the goal mouths, have maintained grass cover at a decent 80%, and allowed reseeding in the worst affected areas.

Twickenham's Head Groundsman Keith Kent, has also seen an 'unbelievable difference' in the areas under two rigs used this winter. Badly worn areas reseeded on December 9 had 100% grass cover a month later - when average temperatures were below 5º. Mr Kent is now using a third rig to help the areas painted with logos to recover. He may buy more next year, when a new hotel complex being built at the stadium threatens to reduce natural light levels further.

At Highbury, ten lighting rigs used this winter have ensured a near perfect playing surface, with a thick, dense sward and up to 98% grass cover.

Head Groundsman Paul Burgess is impressed by their performance. "In March 2005 we had to re-seed - but this year there will be absolutely no need. The quality of the grass cover is fantastic.

"Our work tends to revolve around the lights now - they are on 24/7 during the winter, and are only taken off the pitch for matches and for mowing. But we couldn't achieve this quality of surface without them. "We will also be using them at the new Arsenal Emirates Stadium, where shading will be more of a problem than at Highbury."

Further trials by SGL in Holland are assessing whether having the lights on for 12 hours at a more intense level, will have the same effect as having them on for 24 hours at a lower level. They are also investigating whether supplying additional carbon dioxide to the grass will increase the beneficial effects of the lights.