Notable for being one of the twelve founder members of the Football League in 1888, Derby County FC is a proud club that plies its trade at the aptly named Pride Park stadium. The stadium's pitch is something that the club take particular pride in, and that in part, is thanks to Limagrain UK's MM60 grass seed. 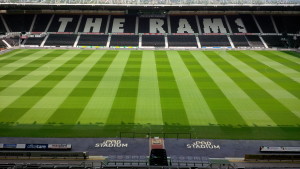 Much of Derby County's illustrious history came at the previous stadium - The Baseball Ground. It was at this stadium where the club won two league titles and an FA Cup. Since relocating to Pride Park in 1997 it is fair to say that the team has endured a rather quiet period in the club's history. However, after a great start to the 2014/15 season Derby remain within touching distance of the Premiership and fans are quietly optimistic that the club are about to enter a new glorious era.

Head groundsman, Andy Croft, is certainly playing his part in helping guide the club back to where it belongs by maintaining a pitch that is already fit for the highest tier of English football. Pride Park is one of the Championship's finest playing surfaces and Andy can only be commended for the fine work that he does on a daily basis.

Andy first started his career at Derby County by cleaning the stands and the toilets as a Derby fan. 24 years later and he is now the head groundsman overseeing a team of eight members of staff divided between the training ground and the iPro stadium. Andy likes to put his own stamp on things and one significant improvement he has made since landing the top job in 2006 is choosing to work with Limagrain's MM60 grass seed.

"I've been working with Limagrain for about four seasons now and haven't looked back since. When I first took over, the previous head groundsman used to use a seed from a different company and I just stuck with that to start with. But I thought "'you know what? You're never going to get better by doing this."' I was just following suit with what my predecessor was doing, so I decided to look at different products which could make an improvement to the pitch," said Andy.

He then decided to trial two other seed mixtures from two different companies before trialling MM60. Each of the four products, including one that his predecessor used, had one whole season to prove themselves and there was one clear winner.

"It was a case of trialling the top four seed mixtures around and seeing which one I liked best. MM60 came out on top so I've stuck with that ever since.

"MM60 just comes into its own in winter with the colour, the vigour and how it plays. It offers good resistance to disease and stands up well to all the battering that it gets, and that's what you want as a groundsman." 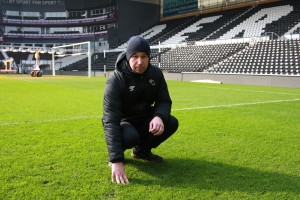 The MM60 grass seed is a 100% Ryegrass formula which is perfect for renovation and divot repair. Renowned for its extremely fast germination; MM60 has a high wear tolerance combined with a high disease resistance giving fantastic aesthetic qualities. It is also treated with Headstart® GOLD, which is a further development of the well-recognised Headstart® treatment which has been developed using the latest scientific findings and field experience. It is a natural revolutionary grass seed treatment that ensures rapid germination and is perfect for enhancing performance on grass seed coatings for sports fields, golf courses, lawns and amenity turf.

As well as being impressed with MM60 grass seed, Andy was also full of praise for the excellent customer service he receives from Limagrain UK.

"Limagrain's MM60 has never let me down but part and parcel of it is the relationship you have with the company. I receive a truly great service and I get on really well with Matt Gresty (amenity sales manager) and that plays a massive role."

Pitchcare are a distributor of the full range of Limagrain Grass Seed, contact one of our Technical Advisors on 01902 440250 for more information.

For further information, or to get your copy of the 2015 MM brochure, visit www.limagrain.co.uk/mm to download the PDF.