0 During Covid-19 lockdown, Master Greenkeeper Phil Helmn found a positive to work on

They say that everyone has a book in them, but for Master Greenkeeper Phil Helmn, it was combination of Covid-19 lockdown, a distance learning degree course and the desire to remain sane, that prompted him to complete a book that he pretty much 'stumbled into'. Phil takes up the story:

"I never believed I had the ability to write a book. I never started out with the intention of writing a book, it just happened. That sounds a little odd, I know, but let me explain. I've always been driven to push myself academically and to learn new experiences in my field of sports turf and sports turf management.

In the middle of 2019, I enrolled on a distance learning business leadership degree course. My goal was to develop, learn and embed the knowledge I'd already gained from thirty years of managing greenkeeper teams, and the idea was that I could do the course alongside my busy work schedule. It took a little time for my head to grasp the new level of learning required but, eventually, I began to make progress. A major part of the course centred around the completion of eight key 'units' (or dissertations) which were designed to be approximately 4,000/5,000 words long on the subject matter.

When Covid-19 struck, myself and most of my team were placed on 'furlough' along with most of our industry, I had only managed to complete three units. When this happened, I quickly realised that, if I didn't channel my efforts into something positive, I would struggle mentally to cope with the isolation and solitary situation I faced. I threw myself into my college work and disciplined myself to wake up at 6.00am and sit at my dining table by 7.00am every day. I only stopped for half an hour for lunch each day and didn't leave the table until 5.00pm, when I went for my one hour government approved walk to get some much needed fresh air.

I did this every day for seven weeks solid whilst on 'lockdown'. Once I had completed my eight units 'quota', I realised that I actually needed more as I was still off work, so I rang my tutor and asked for four more units! She was a little puzzled but sent through the extra works, which I smashed out in rapid time.

It was only at that point did I realise that I'd actually written something that could be developed into a book. I'd been so engrossed in my work by trying to stay positive and keep motivated, whilst trying to keep stress, anxiety and worry at bay, that I genuinely hadn't noticed!

I was thankful that, by writing it, somehow helped me stay focused. I also realised that other fellow greenkeepers might not have been so lucky to have such an escape mechanism, which is why I hope to donate some profit back to the greenkeepers benevolent fund in recognition of that fact.

But then, when it was finished, doubt crept in! Was it actually any good? I had no idea. I decided the only way to know for sure was to print some copies and send them to six of the top course managers in the industry. I was extremely nervous but had nothing to lose. Luckily, the response was unanimously favourable so its now gone to print and will be ready to buy at the beginning of September." 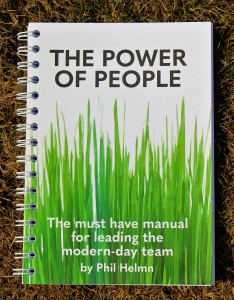 "There are a lot of good management books out there, but none are specific to turf management. Modern day greenkeeping is changing and so does becoming a turf manager who can lead from the front. If you want to learn more on driving innovation, improving performance to a higher standard whilst creating a winning team mentality then this is the book for you."

"The Power of People is written in a no-nonsense, uncomplicated way which made it easy to read and understand. I found the models and theories Phil uses insightful and amazed that, even though some are over 70 years old, are still totally relevant in our modern-day managerial life. Like it says on the cover, I am delighted to recommend The Power of People as a must have manual for all new and experienced modern-day managers."

"Working as a manager throws up many challenges that are often complex and difficult. The Power of People helps managers consider and develop solutions to create win/win outcomes. Every manager should have this book as their reference guide and support."

"Phil shares what I would consider to be the most valuable aspect to managing and that is it's people. The Power of People gives an experienced and practical look at what it takes to be a great leader in the modern era of managing turf."

"Whether you're an experienced leader or managing a team for the first time, this book has something for everyone."

To purchase The Power of People, or for further information, visit Phil's web page at www.philhelmn.com

Phil Helmn is a Master Greenkeeper (one of a select few worldwide) and has risen through the greenkeeping ranks from trainee to sports turf General Manager. Since leaving college in 1987, where he gained his diploma in sports turf science with honours, he's lived and breathed golf and greenkeeping all his life.

Phil's early years growing up in his hometown of Morecambe, Lancashire was greatly influenced by his father holding the post of club pro for twenty-two years and his mother being the junior co-ordinator for over a decade, both of which earned them honorary membership on their retirement for commitment to service.

Like many others in the turf industry, he initially got the greenkeeping bug by working on his home course at weekends and during school holidays. Phil knew from those early days that greenkeeping was to be his lifelong vocation and, as a result, has always worked in the golf course world.

Phil has gained over thirty-five years valuable experience working with plentiful as well as tight budgets, large and small teams and has mastered the need to get the best out of all resources available. He has managed full golf course construction projects, grow-ins, re-builds and regular maintenance operations with teams on a wide range of soil types in the UK, Europe and America and has used these experiences to fine tune his mentoring and common-sense management style.

Phil has also spent time college lecturing when his busy timetable has allowed and became an industry assessor to help support more work based practical forms of learning. Phil enjoys speaking at regional, national and international conferences on turf leadership and has been successful in applying these into more workshop style formats enabling a more 'hands on' learning experience.

Phil is a natural born communicator and his infectious passion for supporting and sharing his experiences and knowledge in a no nonsense, easy to understand way shines through at every level.

At home, Phil is the proud father of four children, Emily fifteen and Florrie, Harry and Artie eight-year-old triplets, which you can imagine keeps him quite busy!