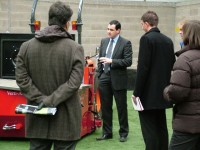 Perceptions that synthetic pitches can be 'fitted and forgotten' could lead to a shorter life for an expensive facility, and even worse, injuries to players. This was the view of independent synthetic surface specialist David Rhodes, speaking at a Press Conference arranged by Charterhouse Turf Machinery at West Ham's training ground.

David pointed out that synthetic surfaces are often used up to 10 times as much as natural turf pitches.

"Synthetic surfaces can become slippery and injuries very easily occur," he cautioned. "Some organisations often offer surfaces for hire which are clearly not suitable for play as they're not maintained properly. With synthetic surfaces, a minimal amount of maintenance is essential. It's easy to be tempted to neglect them, but it's essential that maintenance is done regularly."

He commented that it is generally known that professional footballers don't like synthetic surfaces where as hockey players love this type of pitch. "Local Authorities need versatile surfaces for regular income - multi sports surfaces are needed in these cases." David added: "One study has shown that 2G synthetics cost facility managers more per annum to maintain than grass, but this is for ten times the use! Synthetics are part of the sporting landscape now and in the future."

David expressed the opinion that more often than not Grounds Managers are not involved in discussions early enough when clubs, schools or Local Authorities decide to install a synthetic surface.

"The question about routine maintenance isn't addressed early enough. Has the groundsman got the right equipment to maintain the surface? Will a maintenance contractor be needed?" he said. 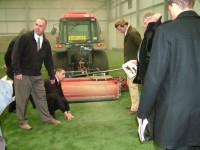 There are a range of different surface types for various uses, he went on to explain. "Sand filled surfaces are perceived as the 'Jack of all trades' and are a popular choice with schools.

owever, for hockey, sand dressed Polypropylene and LSR Polyethylene are becoming popular to give a surface more like the water filled pitches they're used to playing on. Hockey players prefer a slick and fast surface with LSR - low slide resistance. The polyethylene is the more expensive option. Non filled water based nylon and polyethylene monofilament surfaces are mainly relevant to hockey and are a much more expensive option with limited demand."

Modern third generation pitches are more versatile and hardwearing, David continued: "The long or short pile rubber and sand fill carpets with approx 30 to 70 mm long pile are designed to take a stud without damage. For the future there are long or short pile non filled or eco filled "studded sport" carpets. We've seen an explosion in 3G carpet demand - but it is still early days for fourth generation."

Attendees to the Press Conference were able to go out to the synthetic pitch at West Ham's training ground and look at the Charterhouse range of machines one by one with David explaining the best use for each product. 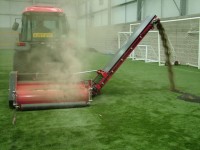 "The groundsman needs a basic toolkit to maintain the pitch on a regular basis and Charterhouse offers a comprehensive range to fulfill this requirement The Verti-Brush and Verti-Broom level and redistribute infill as well as sweeping the turf, while the Verti-Top lifts the top layer of infill and filters it before returning the clean sand or rubber to the pitch and brushing in. It can also be useful to have a leaf blower to remove leaves and litter from the pitch to minimise contamination."

Major renovation work is the job of the Contractor, he added, but here again Charterhouse offers technologically advanced equipment, as David outlined. "The Verti-Air lifts all infill material out of the carpet and sifts out contaminants and debris while the Eliminator allows the infill to be removed completely and replaced with fresh material."

However, David added that, having invested in machinery, it was important to strike a balance. "Try to avoid too much brushing- twice a week is sufficient in most cases. The infill should not be lifted too often either - recycle, brush and filter four to six times a year and rejuvenate once per carpet cycle.

Also consider the conditions - moisture content can be important when planning the use of certain equipment. It is a balancing act between too little maintenance and too much use of heavy machinery. And of course it is essential that ground staff should have good training on the products they're using."