Berkhamsted Golf Club has installed a comprehensive new irrigation system which will see a seven-fold increase in sprinklers and better playing conditions at the 129-year old golf club. Andy Hiseman gives us a review of the project. The famous bunker-free course at Berkhamsted is regularly included in lists of England's Top 100 golf courses, and is a well-known connoisseur's choice for fans of golf architects such as James Braid, Harry Colt and Willie Park Junior, each of whom had a hand in its design.

Largely unchanged for the last one-hundred years, and set in a beautiful 560-acre area of natural Hertfordshire heathland, each year the club hosts the prestigious 72-hole Berkhamsted Trophy, which kick-starts the Men's elite amateur golf season in the UK.

Previous Berkhamsted Trophy winners include former world number one Luke Donald, and Masters champion Sandy Lyle, plus a host of European Tour stars and amateur giants such as Peter McEvoy and Gary Wolstenholme.

Berkhamsted's winter 2018-19 irrigation project was a team effort which saw decades of experience brought to bear on the project from the club's own in-house team, plus external irrigation consultants Irritech and sports turf contractors Agripower.

Twenty-seven-year irrigation industry veteran Roger Davey runs Irritech, and Berkhamsted contacted them in early 2018, when the club was reviewing its irrigation. After meeting the greens committee and Berkhamsted's new Club Manager, Howard Craft, Irritech was selected to appraise the club's existing system. "Berkhamsted needed advice as to what they already had, and what they needed their irrigation system to be capable of, going forwards" said Davey. 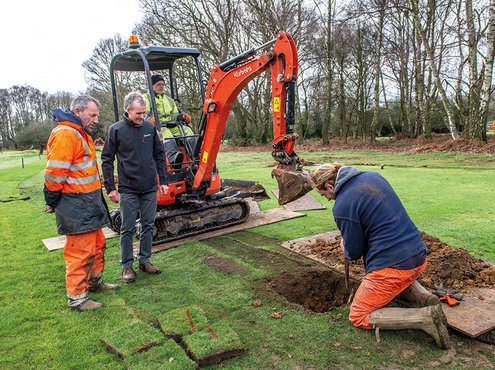 "I often ask golf course managers to name their largest piece of machinery" he said. "Most of the time, their answer is some sort of mower or tractor - but I remind them that their irrigation system is actually the biggest and probably the most expensive piece of kit that they have."

"If you think of your irrigation system as a single, large, complex machine which spreads over 100 acres, you can begin to understand how important it is."

Davey conducted an initial appraisal as part of a due diligence process. This highlighted several deficiencies at the club, and Davey was subsequently asked to design and specify a new irrigation system, and to manage the process of putting it out to tender.

By late summer 2018, five firms had tendered. Sportsturf contractors Agripower, based locally but highly-rated nationally for their drainage, earth moving and pitch construction expertise, submitted the winning tender, and started work at Berkhamsted in November 2018, with Irritech installed as project managers.

Needing approximately 18km of water pipe and around 23km of signal cabling to control the sprinklers, the Berkhamsted project was a typical size for an 18-hole golf course. However, like every site, it also offered unique obstacles for the team to surmount.

As he prepared his team in autumn 2018 to start the job, Agripower director Gary Plummer knew that bunkerless Berkhamsted's unique layout would create its own challenges.

"Berkhamsted is one of the only completely bunker-free golf courses in the UK," he said, "but despite the lack of man-made hazards it is still a very tough test of golf. This is partly due to the high number of mounds to be found on every hole, particularly around the greens. I could see that the abruptness of the slopes would make it difficult, in some cases, to position our machinery where it needed to be."

"There are also a few road crossings to be planned for, when getting from A to B, and with the top surface prone to breaking up with very dry conditions underneath, after the hot summer, we knew we had to be at the top of our game."

The hot summer last year had left the soil very hard, as at most UK golf clubs. Also, as the club had never had sprinklers on its approaches before, a whole new system had to be designed. The project also hit delays in late January 2019, when severe frosts and snow halted work for ten days. "When there's snow on the ground, you can't see the tees and greens properly to mark out exact sprinkler positions" said Davey. "Plus, moling in the snow and frost is more or less a non-starter."

With visits to the Berkhamsted site approximately every ten days to check on progress, Davey played a hands-on role in assisting the Agripower and Berkhamsted teams. "Although they are not best-known for irrigation work, I found Agripower to be an extremely competent contractor, with everything on hand and very quick to react when the project threw up the occasional unpredictable situation!" he said.

New irrigation was needed in all parts of the golf course - greens, tees and, starting approximately 15m from the putting surfaces, approaches too. 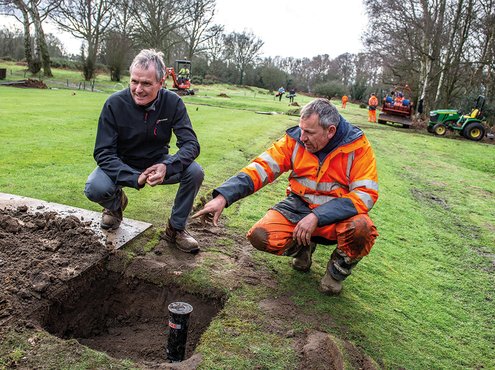 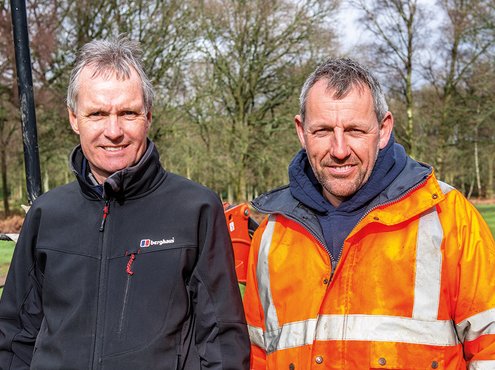 With just under six-hundred new sprinklers going in, the course was set to see a seven-fold increase on its previous sprinkler count.

"The old system was proving difficult for the club to upkeep," said Plummer. "They weren't covering the approaches, and the tees weren't irrigated either so it was a very comprehensive renewal."

Set just below turf level for easy mowing, the new Berkhamsted sprinkler system consists of computer-controlled Rain Bird 751s and Rain Bird 950 Eagles on the greens and approaches, with Rain Bird 5004, 8005 and 550 series sprinklers around the tees.

Back-to-back sprinklers were paired with a 200mm gap in between, for the greens and approaches, with tails also watering a little behind the sprinkler in many cases.

Roger Davey specified where each sprinkler should be placed, and what the bar pressure settings should be.

Additional quick valve coupling brass connections were also supplied at every green, so that club staff can provide additional irrigation or sprayer fill for any emerging hot spots.

For the more detailed work around greens and tees, a DitchWitch 5700 vibrating mole plough was used.

Kubota mini-diggers (U17/3 1.7tonne and KX71/3 3 tonne) were used for earth moving, and a 3-tonne Terex dumper running on turf tyres was the main workhorse for ferrying duties.

2.5mm Rain Bird cabling was used for the electronics to control the sprinklers and the solenoid valves around the tees.

"The new irrigation system is linked to a weather station," said Bruce, who has been at the golf club for thirty-four years. "It's an intelligent system, so if we have set it to irrigate 4mm of water overnight, and we get 2mm of rainfall, the system only supplies the extra 2mm needed."

"It is a huge upgrade for the club. Having a computer-controlled water input system, with each component in the system controlled independently, will give us far better moisture control on our greens, which will lead to more consistent putting surfaces. This will help us with our plan to move towards more desirable bent-grass-dominant surfaces over the coming seasons."

"Now that we have extended our irrigation to include the approaches, we are far better-equipped to defend those areas from unwanted dryness, and of course we can also now manage our tees more easily - which makes me confident that they will also look much better as a result of the new irrigation system."

"Golfers should notice a better blend from fairway to approach to putting surface, once the new irrigation system has begun to have an effect." 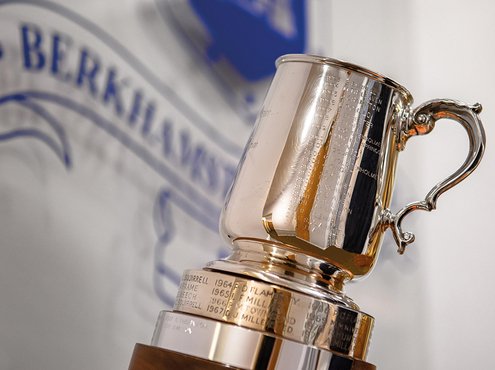 Back in his office, Bruce can now control the entire irrigation system via two computer screens, and he also has full control via a phone app. "If needs be, I can now independently irrigate any particular dry spots on the golf course from my phone, right down to an individual sprinkler," he said. "This will save an enormous amount of time, and means that I can also look after the golf course remotely, or even from home."

"The weather station monitors things like temperature, rainfall and evapotranspiration, which is the rate at which moisture is being removed from the surface. All parts of the system are designed to 'talk' to each other, and my team and I are thoroughly looking forward to having the new system in our armoury this season!"

On the time-saving aspects of the club's new water-management system, Bruce said: "We will certainly save a lot of time in keeping dry areas alive, and there will be less need to hand-weed some parts of the estate owing to better moisture-control, but correspondingly we also expect to be doing more cutting on a regular basis as our grass will be growing better and more consistently."

"Plus, with almost six-hundred sprinkler heads to maintain, rather than the seventy-six we had previously, our workload will be similar to before, albeit with a different emphasis."

"For example, our sixth hole has five different tees, each now with six sprinkler heads, so there are thirty sprinklers around that tee alone."

"Our famous mounds will also receive more moisture via drift, so we expect those to look aesthetically better too!"

"Overall, our members and the many golfers who regularly make the pilgrimage to one of England's most notable inland golf courses should see a great improvement in course conditions over the next few seasons, as my team and I harness the full power of our new irrigation system."

"Our beloved golf course up here on Berkhamsted Common may be entirely natural, and free from man-made hazards, but underneath the soil there is now some extremely powerful 21st-century technology."

As for working with Agripower and Irritech on the project, Bruce has no doubt that the club picked the right team. "It has been a very good experience, and the quality of the work has certainly met our expectations" he said. "The attention to detail shown by Gary, Roger and their staff has been excellent throughout, just as you would want it to be."

"The Berkhamsted team have been amazing throughout this project" said Plummer. "We have all worked well together through the unpredictable winter weather and on a demanding deadline, given the timing of the Berkhamsted Trophy in early April."