by Eibhlin Murphy
in Machinery & Mechanics
on 28 May 2019

When a professional football club asks you how you produced such a first class finish to a football pitch - you've got to be doing something right! Pride of workmanship is one of the key values of landscape contractors, H & I Kelly Landscape, based out of Poole, Dorset. It's totally manned by a family team led by Hugh Kelly, who started the business back in 1976, Irena, Hugh's wife who looks after the administration, and their four sons, Chris, Paul, Steve and Matthew. 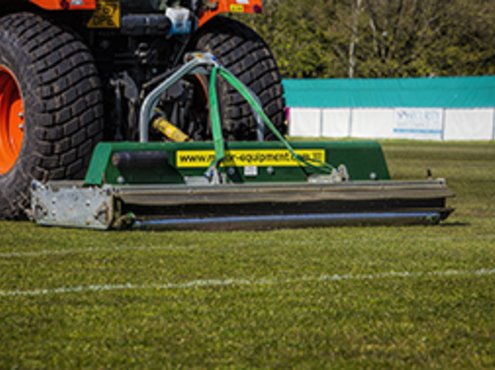 Initially, the company was founded on contracts for the MOD, but has expanded its customer base to sports arenas, professional football and rugby clubs, schools, commercial facilities and a whole lot more. They operate throughout Dorset, into Hampshire and parts of Wiltshire and offer full-service landscape maintenance facilities which includes tree surgery. With an established reputation for quality workmanship, the company has attracted many high-profile contracts that demand the use of ultra-efficient equipment. Recently, the company has made some significant investments in new equipment and little did they know that these investments would attract such praise.

"Twenty years ago," commented Chris Kelly, "when we were working MOD contracts, the mainstay of our grass maintenance programme was a MAJOR roller mower, that lasted for years and it was a really good bit of kit. In looking for a new mower, we reviewed the mower market to see what existed and kept coming back to our experience with the MAJOR mower - we were looking for longevity, reliability and quality of finish."

"We bought a new Kubota 6060 compact tractor," added Chris, "and in deciding on which mower to go for, Andy Frost at our dealer EG Coles, confirmed our gut feel that the MAJOR brand was as good as it gets. It was also well-priced and good value for money. We decided on the MAJOR Swift MJ71-240 Rigid Deck Roller Mower. It's mounted, two-point four metres wide (2.40m) and comes with full-width rollers, front and rear We took delivery last October and we are really impressed. It leaves a finish that is equal to any cylinder mower, without leaving windrows - it's incredible." 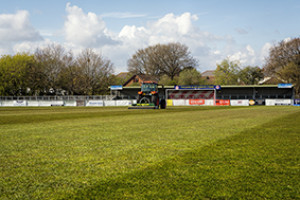 The MAJOR Swift mower is manufactured from high strength steel called Strenx-700MC. The entire machine is hot-dipped galvanised which extends the durability for long life. Four rotors with eight blades that overlap the cut by 60cm either side means an absolute accuracy of cut across the entire width of the machine. The rotor-blade design means that grass clippings are chopped several times and are quickly absorbed into the surface.

"Since we've been using the MAJOR Swift mower,' enthused Chris, "we've had some amazing feedback from clubs, fans, players, visitors, you name it. We look after the pitch for Poole Town FC and they might play fifty games a year on that one pitch. The Directors have commented on how well the playing surface is now. Chelsea Football Club used the pitch to train on before their game with Bournemouth and it was a member of their support staff who looks after the team requirements who asked us how we did it? Feedback came also from other teams and their support staff commenting on how level the surface was and were impressed with the thickness of the grass. Some team representatives have even thought that the grass pitch finish looks just like a 3G surface - that's an amazing compliment! But that's all come about by the cutting regime we employ which is all part of the improvement plan, that's been created by using the MAJOR Swift mower."

Other customers in the area using H & I Kelly include Bournemouth School which has three rugby pitches and three football pitches, AFC Bournemouth - Ladies and lots of smaller sports clubs. The positive feedback is similar, no matter where they go.

"The MAJOR Swift mower has been an absolute dream of a mower," said Chris. "It's easy to set the height of cut between jobs, easy to maintain, is a light and very strong machine - not too heavy to avoid compaction but is firm enough to leave a very level finish. It handles thick and wet grass easily and the two rollers, with heavy scraper bars prevent grass sticking - therefore maintaining height of cut. It rides the pitches so well that I haven't had to replace a shear-bolt yet - it's turned out to produce the ideal finish that reflects the quality of workmanship that we as a company always strive to achieve. What's more it comes with a full, three-year warranty - but if it's anything like the original MAJOR mower we used to have, it's going to last us twenty years of more," he concluded.