The summer of 2018 posed a challenge for turf managers throughout the UK and wider Europe. The prolonged dry and hot conditions, which went down as the joint hottest on record, caused damage and turf loss to surfaces up and down the country. However, the wider effects of this are still being felt as seed crops also fell victim to the unprecedented conditions. 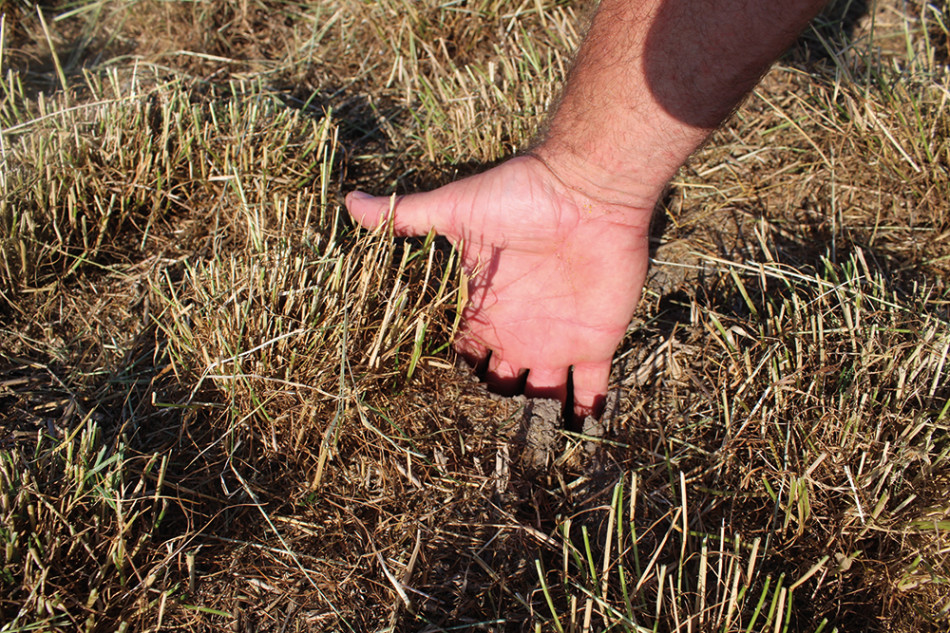 Derek Smith, Amenity Sales & Marketing Manager of DLF Seeds explains how climatic conditions are a major headache in the planning of seed supply, as demand spiked and stocks fell.

We live in an age now where we're used to having everything available at the click of a button. We have the luxury of logging online and ordering groceries, for them to turn up at our door the very same day. Here, it is well documented how some fruit and vegetables get from 'field to fork' in under 24 hours. For turf managers, they can contact their local rep or distributor and can often get bags of seed delivered the following day. However, to get the seed into the bag and out to the customer has been three years in the making!

The market availability of grass seed is finite and is largely determined by the forecasting and planning that has taken place in the two years prior to harvest. To illustrate, during the summer of 2019 we are in the process of planning which crops to plant for harvest in 2021, which will eventually make it into mixtures in the spring of 2022 - that's no easy feat!

To try and predict future demands requires a lot of time, analysing markets by nation, seed variety, and right down to forecasting the various levels of quality that users will be looking for to ensure we plant the correct quantities of the necessary species to meet requirements. We will begin by analysing our starting inventory and stock levels. Then it's looking at wider sales trends - are demands increasing and will this continue? Or is the market levelling off or likely to decline? Finally, it's looking at the market trends which is where we analyse in detail the species currently available, and any new cultivars or species which may need to be factored into the equation. 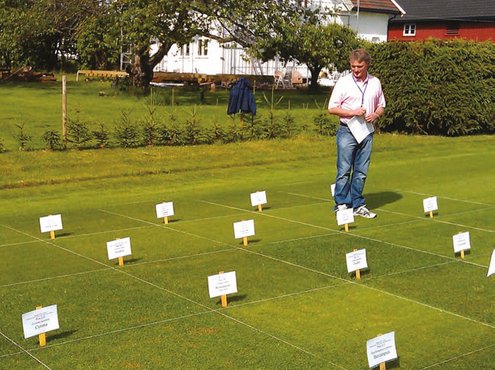 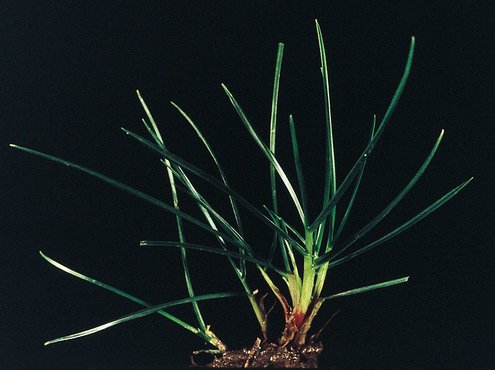 Left: UK trials Right: Perennial ryegrasses have grown in popularity over other species such as smooth stalked meadow grass

A classic example of this is the turf-type tetraploids DLF began harvesting five years ago. Having looked at the speed of establishment, cultivar qualities, tolerances, cost and environmental factors (such as the drive towards reduced water and nutritional input) we were optimistic of them becoming a core ingredient within our mixtures. However, despite our best estimations, they became far more popular than expected which meant that for the first three years we were unable to harvest enough to keep up with demand. Having now adjusted the quantities planted, the crop cycle is catching up.

Equally, the introduction of new species also means working out which species will be reduced. The rise in the popularity of hybrid turf systems has seen a decline on the reliance of turf for stadia, and the number of re-surfaces taking place each year. This means that where varieties such as Smooth Stalked Meadow Grass (SSMG) were once a staple of turf producers due to its dense, high-wearing and strong rooting system, its slower establishment means that it's no longer a popular choice for overseeding. While it has qualities desirable for certain niche markets, a percentage of the crops once dedicated for SSMG have been switched to cheaper, fast-establishing species like Perennial Ryegrass.

With the two-year crop planting cycle of the amenity grass seed market, unlike other areas of the industry, production cannot easily be increased or decreased depending on demand. A big spike for a mower company will see more resources put into manufacture to produce stock accordingly. Equally, chemical firms can source more of the ingredients required to make more product and hold any excess supplied for the next surge in demand. Grass seed is not a tap that can be turned off and on in the same way.

As a living organism, grass seed has a shelf life which will vary depending on conditions at harvest, drying, cleaning and storage. Adequate rainfall through the growing season followed by a dry few weeks ahead of harvest will see high yields and healthy seeds. These will naturally have a higher viability and would generally maintain optimal viability for several years when kept in ideal storage conditions. In a poor season, this could be significantly reduced. As a general rule, the seed you're using this year is likely to be from the previous year's harvest.

While we can make our best estimations of trends and market activity, there are elements in the mix that we cannot control - the weather and resulting crop yields being the major one. During 2017, we started to see market demands return to levels achieved prior to the 2009 recession, which meant we entered 2018 with lower than expected inventory levels. We then fell victim to the 'Beast from the East' which was tough on the crops and then went straight into one of the biggest pan-European droughts we have experienced in recent years.

The extended period of very hot, very dry conditions hit seed producers hard. The European grass market totals an estimated 200,000 tons per year - approximately 80,000 tons is for the amenity market of which roughly 12,500 tons is used here in the UK. It is well documented that certain species are better able to withstand challenging climatic conditions, however it is estimated that harvests in the summer of 2018 were down by 10% (8,000 tons) overall, with some species in particular dropping in yields by as much as 30%. The crops that did survive produced seed of varying quality.

Simultaneously, the burning up of turf across Europe caused a spike in demand that was impossible to predict. The autumn of 2018 saw a rise in consumption of 30% to 40% compared to expected levels as turf managers fought to renovate and repair, which meant seed suppliers were borrowing from future stock to cope with current demand. For many, the warm temperatures that were sustained late into the season caused this seed to fail. This in turn created a residual demand that has rolled through to the spring of 2019, as those that couldn't renovate last year now require seed to 'catch up', taking supply from already depleted spring stocks. 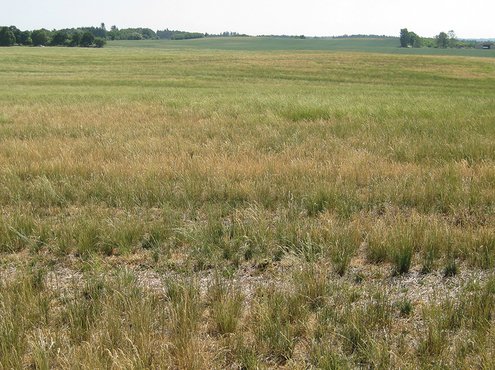 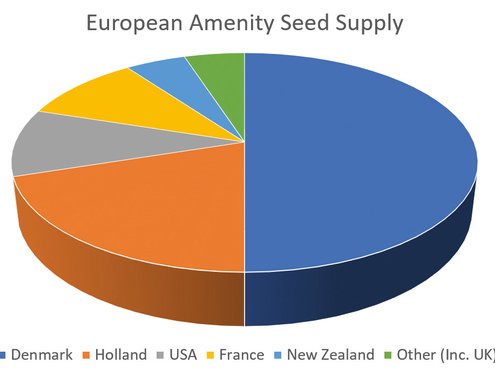 The same issues turf managers faced in getting seed to establish during the autumn also effected the newly planted crops for 2019 harvest. Grass seed is normally produced on a two-year cropping cycle. These can then be left for a third year when required, however the seed yield is usually significantly reduced. The weather experienced in 2018 led to the poor establishment of many first-year crops, which not only reduces yields in the first year, it can also mean a reduced second year crop. In the worst cases, some crops were ploughed out.

All of this culminates to the position the market finds itself in today - the lowest stock levels we have experienced in decades. In particular, Smooth Stalked Meadow Grass and Tall Fescue harvests are significantly reduced while there is currently very little rolling stock of Red Fescue and Bentgrass - the latter of which is a real concern for the UK market. The unavailability of certain cultivars has seen DLF remove a number of mixtures from the market to ensure only those that meet our quality parameters remain on sale. However, that's not a tactic employed by all seed companies, so for those managing surfaces where quality is paramount, you should be aware that the seed in the bag may not always be the original catalogue specification, or the quality you normally expect.

Unfortunately, when seed supplies run short, high purity seed can be harder to source. From the harvest 'pot' you'll have a certain, finite percentage which can be considered as high purity. The smaller that pot is to begin with, the less of the high purity seed is available. We're all aware of the pressures turf managers face to achieve higher quality surfaces, while the tools at their disposal to achieve this are becoming increasingly limited. That's where, despite the challenges we face with things like the weather and wider economic factors, it is vital that as industry suppliers we are looking for ways to deliver new products into the market to help them achieve their aims.

So, while we're facing historic highs in demand and lows in crop yield, for DLF it's not all doom and gloom! In early 2019, we launched 'DLF Select' - a new programme within our production chain to safeguard quality, ensuring that only the cleanest fields are used to produce the purest crops. It took major investment through all levels of planning, growing, harvesting, cleaning and logistics to secure the delivery of seed that far exceeds the baseline EU purity rules and standards.

To meet the targets for the DLF Select programme, and having already forecast an upturn in overall industry demand, we also began increasing our plot acreage in the main production markets. For the European Amenity industry approximately 50% of seed is grown and harvested in Denmark. Holland is another major production area, contributing 20% into the pot, with the USA and France making up 10% each of the total yields. New Zealand is another, largely responsible for Bentgrass production, contributing a further 5% of the total market while other regions, including the UK, make up the remainder of supply. While sowings around the world were affected by the adverse weather experienced last year, we are now better positioned to ride the storm by securing a larger proportion of the available production acreage.

The Bentgrass market in New Zealand was one of those hardest hit. A combination of the adverse weather conditions and an increase in demand within the local market saw less seed available for export, making prices rise globally. This year, yield forecasts are for some crops to be up to 50% down on average, meaning Agrostis capillaris will remain in relatively short supply. While this is unlikely to cause any further hikes in the price of Bentgrasses, it does mean that prices are unlikely to come down.

However, the really good news (and written with fingers crossed!) is that 2019 so far has provided almost perfect growing conditions since early February. We had a fair winter into a mild spring, with rain at the right times meaning that crops are universally looking better for this year's harvest. As demonstrated though, it really is a fine balance and it only takes one factor to change everything - another drought and there could be real problems.

In summary, the seed market as it stands is tight and is likely to remain this way until at least the spring of 2021. If the weather continues to play ball this year, a good harvest should restore us to some kind of equilibrium. It's important to remember, in the short-term, that despite the rather daunting statistics, there will always be seed available, it may just not be your first choice cultivar or quality. If you require particular mixtures, cultivars or quality parameters, bear in mind that they may be harder to source, so it is now more important than ever to plan ahead.

Pitchcare are an appointed distributor of DLF / Johnsons seeds.
Visit the Pitchcare Shop to view the full range