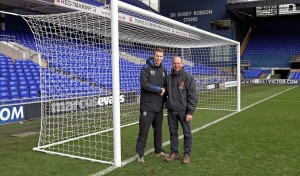 However, it wasn't until December this year that company MD Mark Harrod secured his dream client: Ipswich Town FC.

As a lifelong Ipswich fan, Mark Harrod had always hoped his company would be in the position it is now.

Mark Harrod won the contract after developing a strong relationship with the current Head Groundsman of Ipswich's Town FC Ben Connell, whom they had worked with previously at St Joseph's College, Ipswich.

Under the guidance of Ben, Matt Davies manages the stadium pitch at Portman Road and was on hand when the new goals were delivered.

"Mark Harrod have a great reputation," says Davies. "We're confident their equipment will really benefit the stadium, and I for one am looking forward to the next few months."

Mark Harrod plan to upgrade Ipswich Town's existing equipment, a process that began with the installation of new goals at the club's Playford Road training center. These upgrades come at a time when Ipswich Town are progressing well under the management of Mick McCarthy.

"Over the next few months we will be working with Ipswich Town F.C. to improve all of the equipment at Portman Road," confirms Mark Harrod. "We want to make sure the team is in the best position to play and keep up their current good form - myself especially," he adds.

It seems that when it comes to football teams, dream clients don't have to be the biggest, or even the best - sometimes they can just be yours.