by Steve Mitchell
in Machinery & Mechanics, Golf, and Industry News
on 24 Aug 2014

Privately owned Matfen Hall Hotel, Golf and Spa near Newcastle has made its first significant machinery fleet purchase for four years, with the acquisition of five new golf course mowers from dealer Greenlay at Cramlington in Northumberland, John Deere's longest serving turf dealership in the UK. 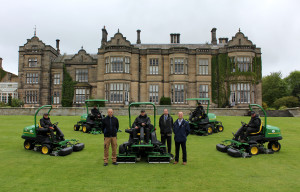 Set in 300 acres of attractive parkland, Matfen Hall is the ancestral home of Sir Hugh and Lady Blackett. First open for play in 1995, the golf club now offers a combination of three nine-hole courses - Dewlaw, Douglas and Standing Stone - plus an additional nine-hole par 3 course, and co-hosted the English Senior Amateur Championships in June with Hexham Golf Club.

In addition, a new set of QA5 quick-attach tees units have allowed an older 2500A greens mower to move from cutting greens to tees and approaches. The greenkeeping staff have also been on a training course on the new mowers, held at the John Deere Limited Training Centre at Langar.

"Some of our previous machines were anything from four to 12 years old, but we wanted to get back onto a more regular replacement schedule, so this deal is the first step on the way to achieving that," says Derek Millar, who has worked at the course for 17 years, the last five as course manager. "This is the most we've ever bought in one go, and we now have the mowing fleet that we wanted to get back into a more sensible rotation.

"The club has been buying John Deere machines from Greenlay for over 25 years, so we certainly believe and trust in the kit," adds Derek. "Mainly though it's about the relationship we have developed with the dealer and the back-up we've had over the years, that's really been more than 50 per cent of the equation. Whenever we have had an issue, it's always been sorted out quickly and efficiently.

"The new QA cutting units are a massive selling point, it's just so easy to change the height of cut now - if I ask our fitter to move it half an inch, he doesn't bat an eye. If you need to make a quick decision when you come to work first thing in the morning you can, and 10 minutes later it's done. The lads are a lot more confident going out to do a consistent job across the course all day every day, and we can definitely play around with the cutting heights on the greens far more than we would have been able to do in the past.

"We also took the decision to upgrade to the new 2500E hybrid electric greens mowers this time round. Because they're that much quieter, we can work round close to the hotel early in the morning without any problem."