by Neville Johnson
in Cricket and People
on 13 Oct 2017

Once a county outground and with redevelopment plans to help get May's Bounty back on the Hampshire fixture list, cricket owes it a debt of gratitude. Neville Johnson went there to see where a hero of his first got into the game and to meet Craig Williamson, the man who looks after it nearly 100 years on. 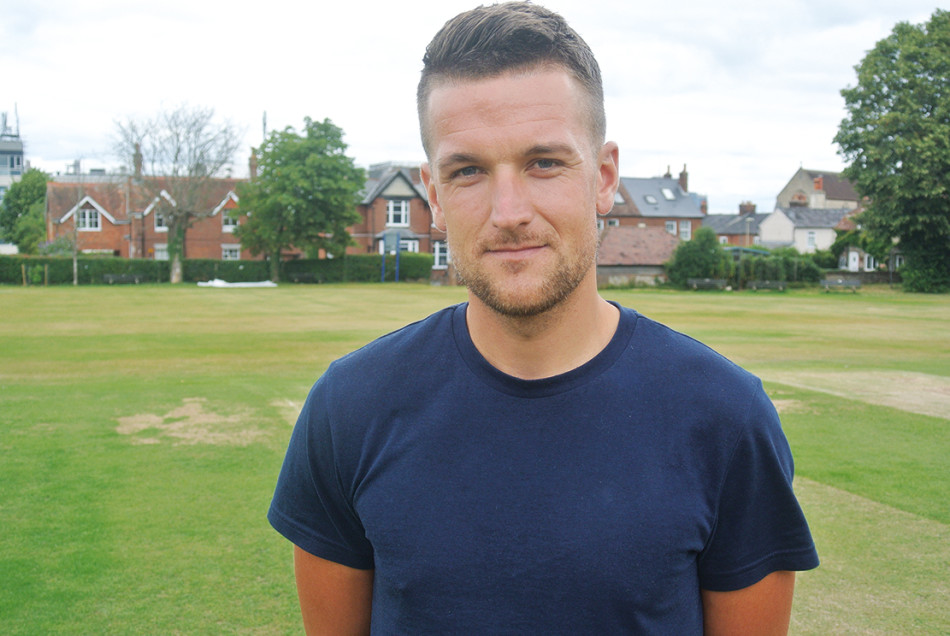 One of the great joys, indeed mysteries, of the game of cricket is that it throws up characters, even legends, who do not actually make their name bowling or batting. One such giant in cricket is the late John Arlott, perhaps the greatest ever cricket broadcaster. He was born, and grew up, very close to this now very urban cricket ground. It has an indelible link with him.

Standing on the boundary and looking across at the backdrop of this prosperous and pretty large Hampshire town, I recall an early chapter in John Arlott's autobiography, Basingstoke Boy, where he describes where the 'seed was sown' for his lifelong love of cricket. He attended the neighbouring Fairfields Primary School, which incidentally continues to use an adjacent council pitch area looked after by the club.

Describing his childhood eureka moment not long after the First World War, John Arlott wrote: "Opposite the school was the cricket ground - May's Bounty - named after Lieutenant-Colonel John May, the bibulous local brewer, who gave it to the town. One summer afternoon, the boy came out of school and hearing unfamiliar noises coming from 'the Folly', as the ground was called locally, he went, curiously, to see what was happening. There he saw men, some of them in white clothes, throwing balls at each other in netting cages and hitting them away. It was intriguing. He continued to go there." 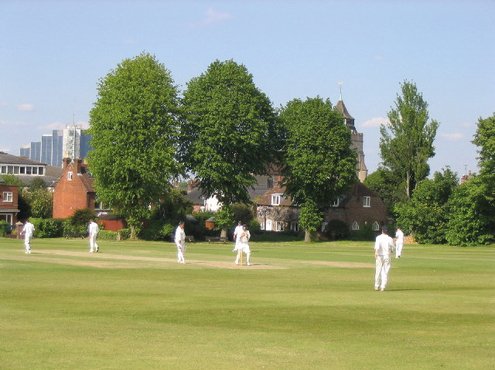 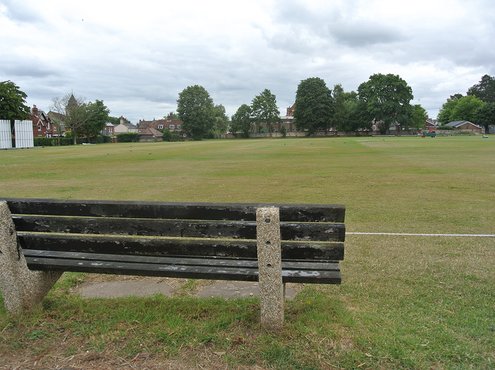 The ground has a place in cricket history, and a significant one for the countless millions who have ever listened to the game. The spirit of Test Match Special, it could be said, was sparked close on a hundred years ago by a bunch of blokes 'netting' here.

I'm here to meet another local man, Craig Williamson, who's in charge of the upkeep of May's Bounty cricket ground and pitches for football and rugby clubs that share the facilities.

Craig is a 'Basingstoke Boy' if ever there was one. He's been in and around the ground for as long as he can remember, both as a cricketer and, more recently, as a groundsman. He's quite a decent opening bat, and one time had hopes of getting to county level, but settled for making runs for the Basingstoke Club. Like John Arlott, his dad played a big part in getting him interested in May's Bounty and cricket.

Twelve years ago, as a school leaver and one of the cricket club's youngest players, he acted as summer assistant to the then groundsman. He hadn't then thought about a career but, because he enjoyed the pitch work so much, decided to get a place at Sparsholt College to study turf care seriously. After achieving Level 2, he took a job as a greenkeeper at Basingstoke Golf Club, where he stayed for nearly seven years.

A couple of years ago, when the previous groundsman retired, the club offered him the full-time job at the ground. His affinity was so strong with cricket - and May's Bounty - that he couldn't refuse. He's now in his third season in charge.

Assisting Craig this season is David Griffiths, former Kent paceman. He is the club's current professional and its bowling coach. He is still quite involved with Hampshire too, as one of its former players, and gives Craig a lot of useful knowledge of pitches on the county circuit. 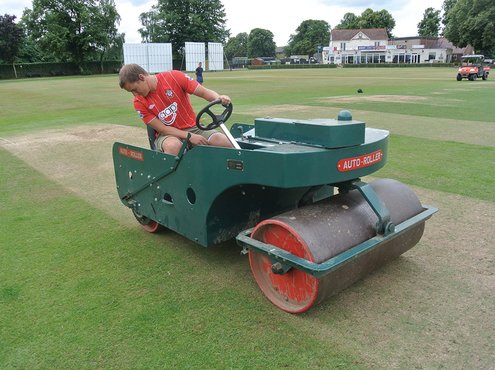 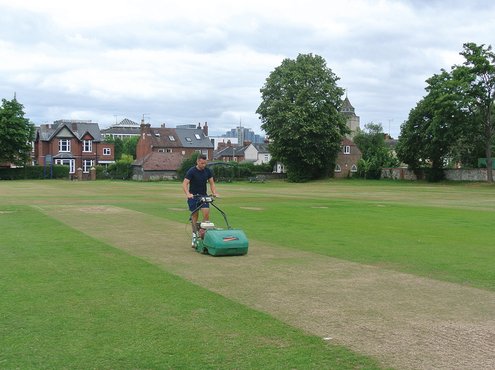 Left David Griffiths does a spot of rolling and, right: Craig preparing the match pitch

"Having a professional player at your side three days a week is pretty useful," says Craig.

There's a continuing cricket pedigree here too. Over the years, many a top player has played here. Among the current big names that once played for the club are Hampshire all-rounder Chris Wood, and Kent wicketkeeper Adam Rouse.

Hampshire used to have the May's Bounty as a regular outground and there have been many first class matches here over the years. It is still used each season for some Second XI and Colts games and it continues to have a firm link with the county club. When there is a Hampshire Seconds or Colts game at the ground, Craig gets valuable advice from Karl McDermott, who's in charge at the county's HQ, the Ageas Bowl.

The ground's cricket table has as many as twenty-one strips for play and practice. One useful idea Craig has picked up from David Griffiths is to reduce the outer strips to a six feet width, giving more available rotation for practice and a bit less wear and tear.

The ground has quite a chalky base and, in the winter especially, it can struggle with drainage. In the summer, it dries quickly and the square does need a lot of watering. The Basingstoke and North Hants Cricket Club, as it is known these days, plays in the Southern Premier League, so it's a pretty high standard.

He also tells me that a telling sign of really dry conditions in summer is when traces of a cycling track around the perimeter of the outfield, not used for over fifty years, become visible.

It is, and always will be, cricket that is the focal point of the May's Bounty. The cricket club is the hub of the whole sports club, and it is best known for its cricket heritage. In 2015, it celebrated 150 years of the game being played here. The first recorded game in the area was in 1817, and the first game actually played on this actual site was in 1855. Thereafter, it became the recognised cricket venue for Basingstoke and the surrounds.

The ground is actually owned by Basingstoke Sports and Social Club which, not long ago, announced plans for a £1.5 million redevelopment scheme for the facilities at the ground. The outdated pavilion will be demolished and replaced by a two-storey pavilion and clubhouse, which it hopes will encourage Hampshire to play county championship cricket at May's Bounty for the first time since the match against Durham back in 2010. There are big ambitions here, and the aim is to raise its appeal as an outground.

The proposed redevelopment includes new ground floor changing facilities for cricket, football and rugby, physiotherapy and first aid rooms and changing rooms for referees and umpires. The upper deck of the pavilion will have a spacious balcony looking out across the main cricket ground, plus spacious social function facilities. It is hoped that work will begin in the spring of 2019.

So why is it called the May's Bounty? It was in 1880 that the name May became associated with the ground, when local brewer John May saved it from being used for building plots by buying it himself to preserve it as a place to play and enjoy cricket.

The pavilion goes back to 1901, when John May had it built to replace a thatched building and the ground enlarged at his own expense. It would certainly have met the gaze of John Arlott. This was in the days when the ground, for whatever reason, and as the cricket broadcaster himself recalled, was known affectionately as the 'Folly'. It, quite rightly, was thereafter known as May's Bounty.

Hampshire first played cricket on the ground in 1906, against Warwickshire in the County Championship, but really only used the ground sporadically over the next sixty years. It wasn't until the1966 season that the county put the May's Bounty firmly on its fixture list. Championship matches always attracted large crowds, as many as 2,500. 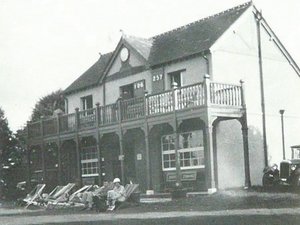 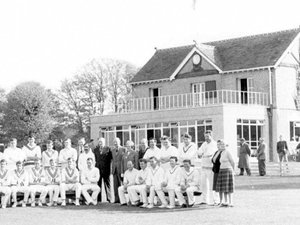 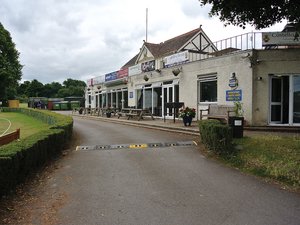 The establishment of the Rose Bowl - now the Ageas Bowl - as the county HQ in 2001, however, led to the inevitable fall from favour of the Bounty as an outground. Within a decade, all the county's first class cricket was being staged at the Bowl. It's a trend seen elsewhere on the county scene.

Aside from the cities of Southampton and Portsmouth, Basingstoke is the largest town in Hampshire and, because it is in the north of the county and some distance from the Ageas, it has a good claim to staging first class cricket. The powers at the May's Bounty are making strenuous efforts to bring it back to the May's Bounty and the new pavilion project is a signal to Hampshire CCC. 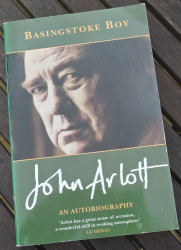 As Tim Tremlett, Hampshire's Director of Cricket, said in the Basingstoke Club's celebration brochure to mark its 150th year: "Hampshire cricket has a deep rooted history at May's Bounty and, in my time, it was always a firm favourite with cricketing legends such as Gordon Greenidge, Robin Smith and the mighty Malcolm Marshall. Our overall playing record was extremely good and a warm reception was always forthcoming, especially from the hospitality tents. The pitch has always helped to produce exciting cricket. When it is fresh, it zips around for the quick bowlers, but often flattens out before turning later for the spinners."

There is no doubt that, without John May's generous financial help years before John Arlott first got the thirst for cricket here, the ground would have become an industrial or residential site and the game would not be played here today. He was bountiful, and the ground is aptly named. Perhaps county cricket may one day return too.