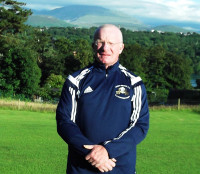 Serving the small town of Menai Bridge, the local cricket club has a willing team of volunteers led by Keith Hughes. In this article, he explains how the club play an important role in the local community as well as providing superb facilities for the up and coming cricketers in this area of North Wales

Menai Bridge Cricket Club (Clwb Criced Porthaethwy) is situated on the Isle of Anglesey in the North West of Wales just off the shores of the Menai Strait. Its most famous landmark is the Thomas Telford suspension bridge which links Menai Bridge to mainland Wales. The town, with a population just short of 4,000, is situated approximately two hours drive from Manchester and Liverpool.

Menai Bridge is also very close to both the University town of Bangor as well as the magnificent scenery of the Snowdonia National Park.

"We are the only cricket club in Wales from which you are able to see the summit of Snowden," says the club's groundsman, Keith Hughes.

The cricket club was established in 1973; prior to this, cricket in Menai Bridge was subject to nomadic playing at a number of different locations. "We are, without doubt, one of the most picturesque cricket grounds in North Wales," he confirms, proudly. 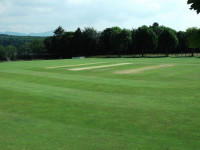 "We are a very friendly cricket club and have always welcomed new members of all standards and ability. A high level of community spirit is maintained by regular club functions and social events throughout the season. We put great emphasis on junior cricket development by providing a structured coaching environment and holding regular practice sessions. We have at least ten active members currently holding coaching qualifications, of which two are dedicated to each junior team. We currently run three senior sides and four junior sides playing in leagues throughout North Wales."

"Our most famous ex-player, and current life member, is Matthew Maynard who has previously held positions as the England Assistant Coach and Director of Cricket for Glamorgan County Cricket Club. The North Wales league also attracts a number of overseas players every season."

By day, Keith is a secondary school teacher; at any other time, he is the volunteer groundsman at the club. "Five club members are involved in volunteering their time on carrying out work at the ground. Myself, Steve Jones, Robbie Jones, Cefyn Owen and Chris Drake. In addition, members will help out if anyone is not available to carry out any tasks." 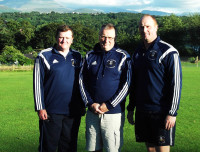 "Both Robbie and Cefyn are greenkeepers at a local golf club," continues Keith, "whilst Chris Drake is a retired grounds manager. So, we have a good depth of knowledge when it comes to ground maintenance."

"For any additional help we use the North Wales Cricket Groundsman Association, of which I am an active member. They have two trailers of equipment which clubs in North Wales have access too. We also have Gareth Phillips as the ECB Pitch Advisor for our region."

"I have also attended courses run by Len Smith, the former head groundsman at Sophia Gardens, who comes up to North Wales on a regular basis."

"Our square is on a slight slope, so water tends to drain reasonably well. The square, when constructed, was laid on a stone and gravel base then built up with soil and loam. We have, in the past, had a problem with low clay content in our profile which we have been rectifying over the years by using Boughton County loam." 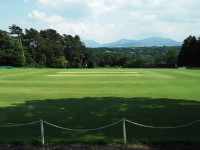 "The ground is one of the smaller cricket fields in North Wales and can get a bit flooded, but this is mostly in the winter, and we do get quite a few gale force winds, given our location."

Keith goes on to explain the work undertaken through the season. "I will usually start by selecting a couple of pitches at the top of the square for early season matches as these tends to be drier due to the slope. I don't have a master plan of where I am going to play matches, which I know sounds a bit odd, but I tend to follow what I have done over the years and it seems to work for me."

"The 1st XI matches are played across the four or five central strips as they require longer boundaries. I try and prepare two pitches at the same time so, if anything untoward happens to one, then I have a back-up."

"I tend to keep the grass on the square quite long, maintaining it at about 12-15mm in length. I use the Webb ride-on mower for cutting the square and also for the first cut of a new pitch." 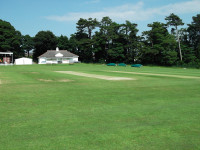 "Pitch preparation begins about two weeks before that strip is required though, sometimes, the weather will have a say in how my preparations goes. I may also give each strip a small feed of fertiliser just to give them a little boost prior to cutting/rolling etc. I use the Hayter Ambassador to lower the height of cut as work progresses on each strip."

"Much of our work is done in the evenings because the lads are working full-time during the day. I can usually get to the ground after school finishes, so that gives me a couple of extra hours a week."

"I will cut out two pitches and lower the height of cut gradually over the days leading up to the match. During this period, I give the pitch a very light scarify/verticut just to get the grass to stand up. If the pitches need watering, I will apply it with a strip waterer."

"I roll as and when conditions allow. Latterly, I have found the ECB document on rolling of cricket pitches very useful as I feel we sometimes do 'over roll'."

"I tend to roll for about twenty minutes each time. But I suppose everybody has their own opinions and approaches to what suits their square. It seems to work for us here."

"We seem to be getting a lot more prolonged spells of rain. This can affect pitch preparation, as well as end of season work. Quite a few times we plan to do something and the weather intervenes, and we end up taking any old opportunity to do some work when there is a break in the weather." 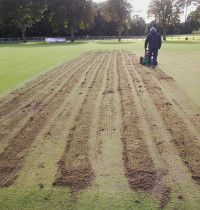 "Our pitches are assessed for PQS by our pitch advisor on a rolling programme of visits year on year. Each ground in North Wales will be assessed and a full report produced for the club, with advice on any actions needed. Soil samples will be taken and sent for analysis and a report sent back regarding its chemical make-up and advising on what fertilising and feeding regime needs to be followed to improve its condition."

"With our double bay artificial net area, we roll with a light roller throughout the season to compact the surface. At the end of season, we lift the nets and weed kill the surrounds. We have called in the installers, ClubTurf, to lift the matting and re-level the base. During the winter we brush and vacuum-blow the net area to keep it clear of debris."

Keith has observed that the winters appear to be getting milder in recent years, which means they don't get the frosts they used to.
"During the winter, I try and aerate a couple of times up until Christmas time, if the ground conditions allow. I try and brush the square as often as I can during this period as well and remove any debris from the square and outfield. I cut the square at a height of about 20mm and in various directions, not necessarily in the direction of play. I use a rotary mower which has had its blade sharpened prior to me using it. I have even cut the square on Christmas Eve morning due to us having a dry spell at that time!"

"We endeavour to keep cutting the outfield during the winter at a height of about 25mm and sometimes cut it with a ride-on -mower collecting the grass as we go along. We spend a lot of time in the autumn collecting fallen leaves as we have a large number of hardwood trees surrounding the boundary edge. These have, though, been thinned out to allow more light to get to the outfield." 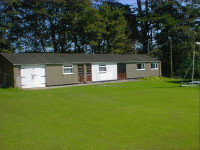 "We have had more of a problem with moss this past winter, especially on the outfield. We used a local contractor to spray the outfield. We did this in conjunction with the local football club and rugby club who had their fields sprayed at the same time. This allowed us to keep the cost down."

"We allow the community to use our cricket field for a variety of events beside cricket. For example, we have hosted a rounders tournament and various charity fundraising days. We have also hosted a wedding, which was something a bit different in that they spent three days erecting marquees, and then only had one day in which to take it down because we had to get it ready for our fixture on the Saturday!"

"I appreciate the problems that groundsmen have when they have major events at their grounds and the potential damage it can do to the playing surface. But, we were lucky that the wedding quests were very respectful of our facilities." 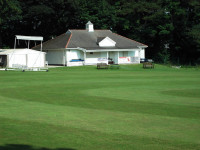 "As I am a member of the club's management committee, I report on most ground issues. I twist the treasurer's arm to various degrees depending on what I want for the ground. We have an excellent committee and treasurer who very rarely turns down requests. Any money we make is ploughed back into improving the club generally. If we have any major expenditure, we endeavour to raise the required amount through various fund raising activities."

This was evident when the old chicken shed, that had served as a pavilion since the club's formation, clucked it's last cluck. "We now have a first rate pavilion thanks to the clubs fundraising efforts," concludes Keith, "and are currently looking at developing our ground even further. With the support of the local community firmly behind us and the number of members increasing all the time, Menai Bridge Cricket Club has an exciting future!"

Access to the ECB Machinery Trailers at any time

Anglesey Mowers in Amlwch carry out servicing, but the basic servicing is undertaken by Keith and his team
Machinery is financed by ECB grants. Also secondhand items purchased over the years

Keith's wishlist includes an Auto-roller, a full set of attachments for the Dennis FT 160 and a new Dennis mower