0 MEPs go to court in bid to reform EFSA 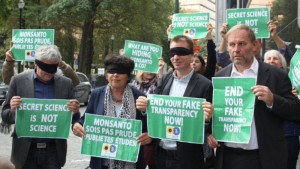 Green MEPs have lodged a complaint to denounce the lack of transparency in EFSA's assessment of glyphosate. They hope to change the internal rules of the agency to boost transparency and limit lobby influence.

"Secret science is bad for your health," said Michèle Rivasi, a French Green MEP. Together with three of her colleagues, she is campaigning for more transparency within the EU's scientific agencies.

On 24 May, Heidi Hautala (Finland), Benedek Jávor (Hungary), Michèle Rivasi (France) et Bart Staes (Belgium) lodged a complaint against the European Food Safety Authority (EFSA) for not releasing the studies upon which it based its assessment of glyphosate.

In 2016, the agency deemed that this controversial pesticide posed no threat to consumers. Just the previous year, however, the International Agency for Research on Cancer (IARC) had judged the substance "probably carcinogenic".

Since then, the European agency has refused to release most of the studies behind its opinion, arguing that they come from the industry and are thus protected as trade secrets.

"But without this crucial data, independent experts cannot check the validity of EFSA's conclusions. This has been underlined by the toxicologist Christopher Portier in his letter to Jean-Claude Juncker", said Rivasi, who is a biologist.

The shreds of information the Greens did manage to obtain by piecing together redacted data and missing documents are, however, enough for the toxicologist to conclude that the assessment carried out by EFSA did not consider important elements that could prove glyphosate's carcinogenicity.

"It is essential to modify the internal regulations of the European agencies so they can only use publicly available studies, just as the IARC does," Rivasi added. "The Monsanto Papers scandal shows us yet again the necessity of putting an end to the interference of the agrochemical industries in public health policies."

You can read the rest of the article HERE.