0 Minchinhampton Golf Club - Not So Common

Very unusually, Minchinhampton's three golf courses are each of a distinct ground profile: The Old Course is a hilltop links on Minchinhampton Common (grazing common land); The Cherington a smaller moorland set-up; and championship The Avening a deep green parkland garnering terrific feedback. 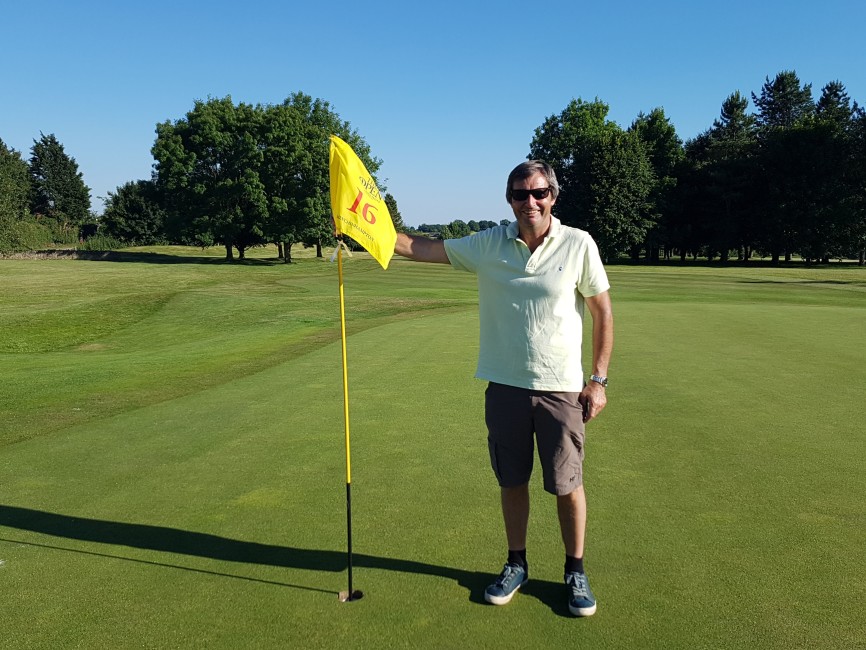 The Old Course, which snakes its way between the tiny town's ancient drystone structures, is an old one, established in 1889 - although, it perhaps seems less old compared to the town (the old town fort wall runs noticeably beneath the course and dates to the Iron Age).

During the Second World War, it was expected that planes would be landing on the tactically advantageous hilltop, and trenches were dug across the course to prepare for the eventuality.

Minchinhampton Common is a Site of Special Scientific Interest and hosts herds of local cattle. Driving towards the Old Course often requires giving way to these walking hazards.

The club, in an affluent area of the Cotswolds near Stroud, grew during the 1960s to the point that it was able to purchase land, about a mile away, for the New Course in the 1970s, and expansion continued with a third 18-hole course in the early 90s.

Paul Worster manages all three courses, reporting to General Manager Simon Pope, and he described this transition: "At the time, the club's only real asset was the lease on a Clubhouse building by the 18th green of the Old Course. That lease was sold to a brewery and "The Old Lodge" Inn evolved in the centre of the Common".

"Because the roads run between the holes on that course, if the club was ever going to expand, as was the ambition, we couldn't possibly do it up there. The Club had actually started to contract if anything, rather than expanding."

"The brewery lease-deal financed buying this [the Avening site], which was a tumbledown barn and about 120 acres. They put one golf course in and, in 1992, could afford a second." 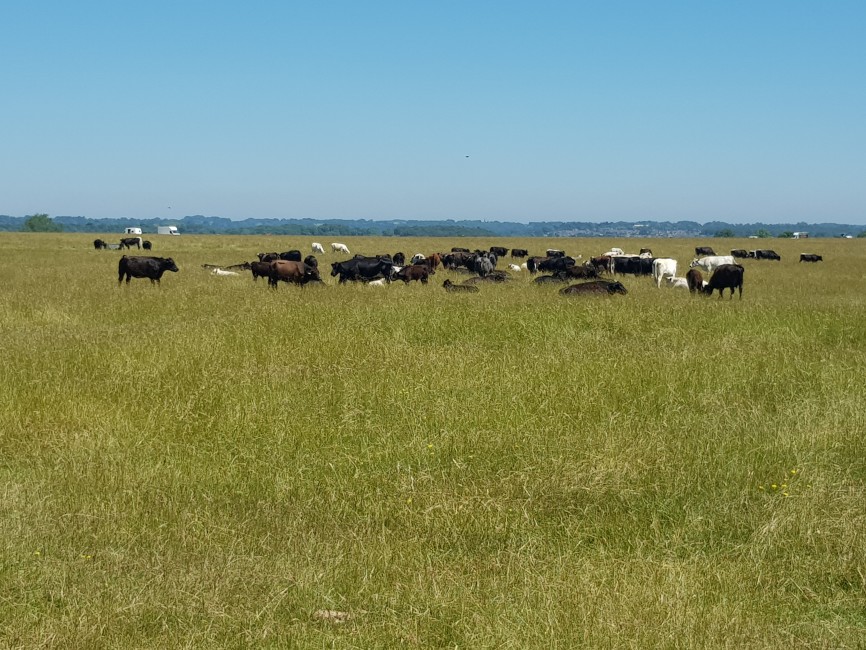 "So, it has seen an excellent period of growth. I'd say it has grown like not many others in that time. We may just be looking for more expansion, although there is nothing concrete yet."

"And it's certainly been a great place to work. We're right in the middle of the Cotswold countryside. We've got 110 hectares, including 30 hectares of wildflowers."

"I think validation like hosting the Open Qualifying tournaments between 2018-2022 does help with preparing for our plans to expand. It's all about raising the profile."

"On Monday, we were on local television, to cover both the club's facilities and the hopes of one of our greenkeepers, who was taking part in the qualifier."

Paul's sons are both also involved in greenkeeping, one of whom works for an exclusive Surrey club.

As we got to the course, Paul's last duty before lunch was his daily stimpmeter reading: "We always take them on the same greens at the same time of day."

I asked him whether he played. "I'm a struggling seven-handicapper," he modestly replied, and so I questioned whether this could really be considered 'struggling'.

"I've been as low as two in the past, so it's actually a bit frustrating nowadays, to be honest. I can't get out there often enough anymore." 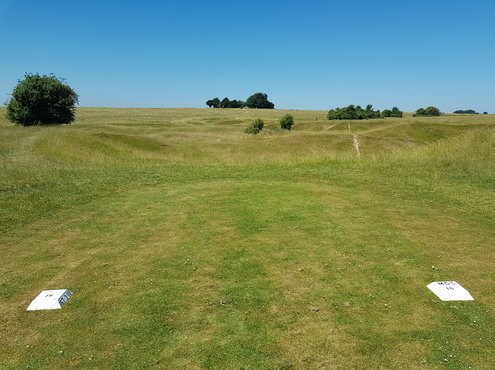 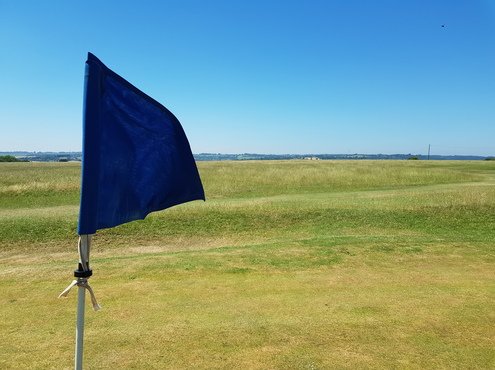 ALS is the sole supplier to Minchinhampton. This covers everything from aeration and spraying, to materials and resourced: "It's working very well. Ray Hunt has been absolutely outstanding, especially with the relationship strengthened via Dan Hughes."

"One thing I've found particularly useful this year is the wetting agent. We've just got into that programme, which is on a monthly schedule. We're making adjustments, as agreed at the outset."

Paul took the multidirectional stimpmeter readings on a few sections of the 18th green. It was a few days after the Open Qualifying tournament and came out at a tidy 10 feet.

That was on a green still right down at 2.5mm as a hangover from the competition, and with a couple of weeks of drought, but it hangs around that speed even when taken up to the usual 3mm.

Bent grass overseeds the greens in late summer, but there has already been frequent light aeration, sanding, brushing and rolling throughout the spring and summer:

"There is no real shaving of the grass, due to the requirements of the bent. This is what you're aiming for on an inland green - just a really good, smooth surface."

"There's quite a lot of air in the ground and just about the right amount of moisture. That will stop the tight conditions at the moment from causing any harm. It will stay healthy with those levels."

The bunkers looked especially pale. They are filled with a fine white sand which is a by-product of China-clay production: "There's plenty of it," he said. 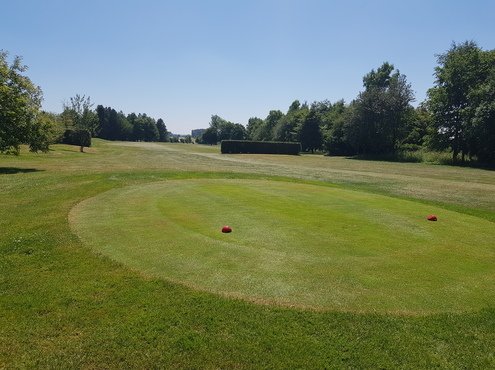 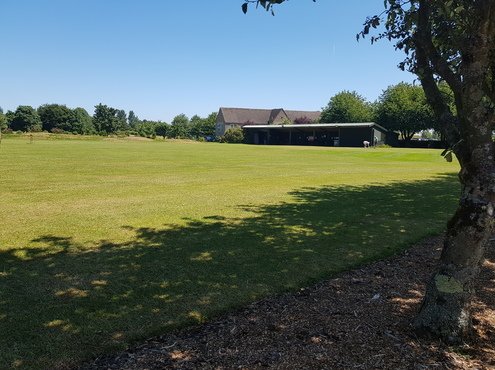 "It comes up from Cornwall, which is the one expensive aspect. But, it works really well and the longevity is fantastic. The content of these bunkers is about three years old, and it has retained all of its drainage characteristics over that period."

"The bunkers are lined. We try to keep a little bit of sand in the faces, so there is some rollback from a poor shot. In the middle, it is much deeper; around four-to-six inches."

All of the bunkers, 135 of them, have been rebuilt recently: "We were aiming to eliminate high faces from the overhangs, washdown problems so we don't have to close and repair during rains."

We were still standing by the 18th green: "This bunker, for example, was divided into two smaller ones. They're much easier to look after. No ride-on Sand Pro needed."

"And we did the same to all of the bunkers around this green. They're in great shape. It's much easier to handle. [Pointing] There was a big bunker there, a big bunker there, and we split them all into three pairs. They kind of look as if they've been here forever. We're really pleased."

I noted that they all look as if they are constantly waiting for stray shots: "Because we put drainage in - we had the liner, then gravel and rocks underneath that - we could afford to let water head into the bunkers, so we could make them lower and more inviting." 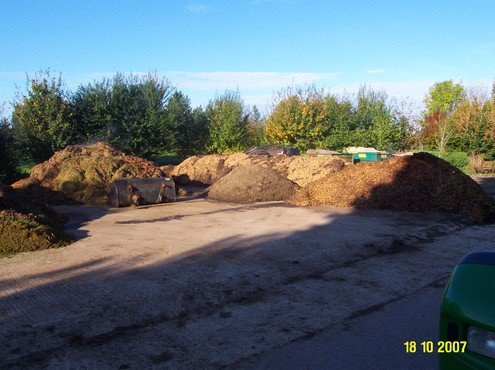 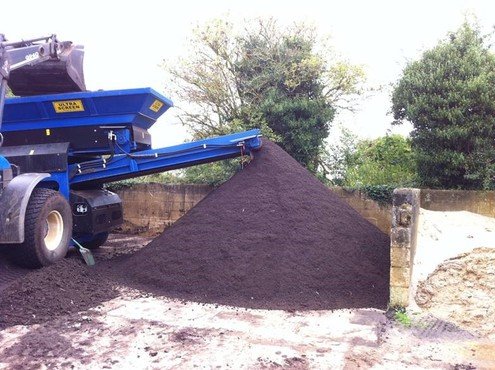 "The drainage is good across this course as a whole too. This is limestone. If we've got an Achilles heel, it is that there isn't much topsoil. So, it can drain a little too well in conditions like this."

"This time last week, this was lush and green, being mown twice per week. We've now completely ceased that, even when the Qualifier was on. There isn't much burning, though. We're just noting small patches and we may head back and compost them or something."

"This, it's important to say, is a proper members' club. It's not a championship golf course. The members are all local people and there's not much bringing people in from afar regularly, and the members are very proud of it. It's really a community facility; that's its purpose."

Paul arrived in 1992, when the club only ran its first course: "The design had already been done for the new course when I arrived, but I worked with the contractors to set it up."

"A member, who was a chartered surveyor at the time, was extremely involved and helped us to tie things together. That was a big factor in the smooth start."

"The architect, Martin, recently returned to examine the scope for further improvements; that sums up the spirit of this club - always moving forwards".

Paul has two deputy managers, Adam Matthews and Dave Rosselli, who ensure efficient running of general daily maintenance, which frees him up to undertake a greater number of management-level tasks:

"It gives me the time to make sure we have the necessary machinery, and that it is fit-for-purpose, that our health and safety is up-to-date, that our materials and budgeting are sorted, and to liaise with the management." 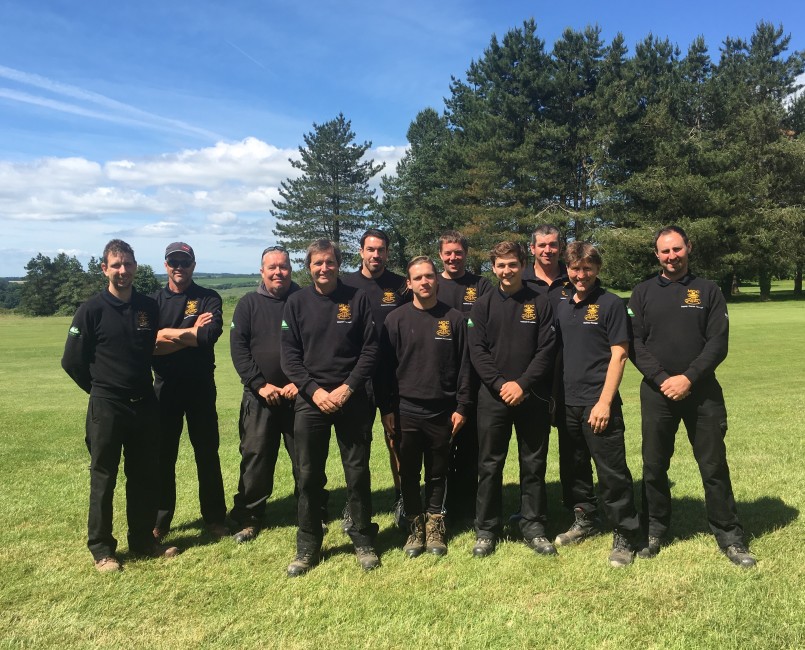 "We have twelve greenkeepers, which sounds a healthy number, but over fifty-four holes, it's actually not that many. You can do something like this tournament very well, but when you've used up ten of those staff members to prepare eighteen holes, you're left with two covering two entire courses."

"This year, we were very grateful to have Steve Lloyd along with Adam and Josh from the Worcestershire as a Support Team. They were fantastic guys and we had a great day with them, and I'd like to record my personal thanks."

We decided we would head over to the Old Course, the links, for lunch: "There are holes over there which would not be out of place on any championship links course in the country."

"It's just an astonishing ground. And it's survived this whole time - 130 years - completely intact and unchanged over the years."

"Golf has had a real positive effect on that landscape and that's something we have to make the public realise, because it's not obvious unless you've really thought about it."

We also headed down to the third course, the Cherington, and the scenery changed yet again. This course looks the newest. It is perhaps the one with the most frequent design similarities with the average inland members' course. 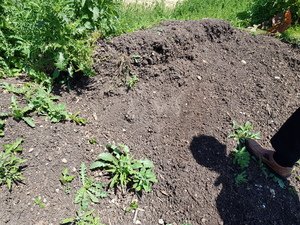 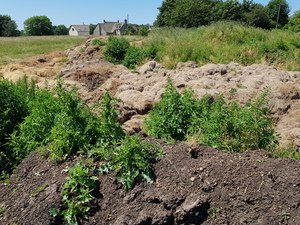 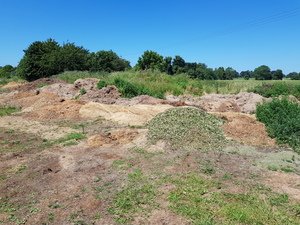 "We have about thirty hectares of wildflower meadows around this area," Paul said. "There is a rotational system to preserve those grasslands around the edges of these two bottom courses."

"Managing those and maintaining that diversity has been key, because we were under regulations to have this course in keeping with the existing local environment."

"The course was only allowed to have a certain number of bunkers, and features which were purely manmade were to be 'scarcely visible'; that was the wording of the requirement."

"There were to be no pine trees either, because any trees were to be the species already found on this section of the site."

Because of this course, like the Old Course, being very driven by that natural mindset, it is the site where the composting for all three takes place.

Copious quantities of what might be termed 'unwanted waste' is produced by the cattle roaming the Old Course, which is then transported to the Cherington and piled with grass clippings and other bits of natural matter. This is then recycled and used to fertilise the club's surfaces. 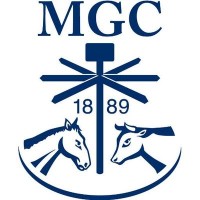 Finally, due to the fact both clubhouse restaurants were bursting at the seams, we headed over to the pub (the ex-Minchinhampton clubhouse which was sold to fund the new acquisitions), and the food in there was also excellent.

And it must be considered excellent beyond the local area because, whilst we were tucking into a couple of pretty huge minute steak ciabattas, Jamie Oliver strolled through the front door with a large television crew.

They ordered about thirty sandwiches too, so it was lucky we got in there first!