A number of disgruntled Louth residents have criticised the Louth Men's Shed and the Magna Vitae Trust after a 'misunderstanding' led to part of the public Charles Street bowling green being dug up to make way for a wild flower garden. 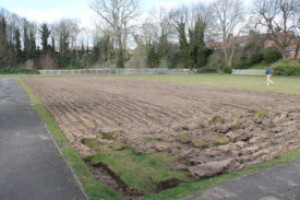 Magna Vitae Trust, which operates culture and leisure services on behalf of East Lindsey District Council, handed over the disused Charles Street Pavilion to the Louth Men's Shed team to use as their base at the beginning of March.

Greg Gilbert, the chairman of the Men's Shed, believed that the handover included both the pavilion and the adjacent bowling green, which the 'shedders' intended to use as a wild flower garden.

In the last few days, around one third of the bowling green has been ploughed, which led to a frenzy on social media over the weekend in which hundreds of comments were posted by Louth residents, both in support and opposition for the project.

On Monday March 30, Magna Vitae confirmed to the Leader that changing the use of the bowling green was not part of the 'licence to occupy' agreement when the pavilion was handed over the Men's Shed.

Magna Vitae's Managing Director, Mark Humphreys, said: "In early March, Magna Vitae granted a licence to the Men's Shed for use of the Pavilion at Charles Street Recreation Ground. The Pavilion has been closed for a number of years and the Group is bringing it back into use as a base for their community work.

"This licence is for the Pavilion only and does not include the Bowling Greens. Magna Vitae will be discussing the issue that has been raised with the Chairman of the Men's Shed Project shortly."

The bowling green belongs to East Lindsey District Council, but has been leased to Magna Vitae since January 1 this year.

Mr Humphrey's added that the handover related "solely to the pavilion" and does not extend to changing the use of the greens. He said: "We recognise that the 'shedders' are an enthusiastic group of people, and unfortunately that enthusiasm appears to have resulted in them misunderstanding the initial agreement and getting carried away with delivering their business plan.

"Any further agreement to expand their responsibilities would need to be agreed with both Magna Vitae and the Council."

Greg Gilbert said that he was "very disappointed" with Magna Vitae's response, as it was his understanding that the bowling green was handed over to the Men's Shed along with the adjacent pavilion.

He pointed out that more than half of the bowling green still remained, and could be used for playing bowls or croquet.