Specialist contractor, MJ Abbott, are bringing their construction expertise to Saltex 2018 after a year of both large and small-scale projects.

MJ Abbott Limited, established in 1965, has developed its expertise in a wide range of products and services and now operates throughout the UK and Europe.

Throughout the last 12-months, the company has completed projects from hybrid pitch construction at Premier League football clubs through to sports pitch construction at schools and colleges. The varied nature of these projects has highlighted MJ Abbott's ability to provide the best solution possible to meet customer requirements and budgets when working on construction, drainage irrigation or landscaping.

This has led to a number of diverse projects being successfully finished including the construction, installation of drainage and cultivation of four pitches ready for seeding at Zeals Football Club and Alderbury Football Club. Dauntseys School, Wiltshire, also had a football pitch constructed, complete with primary drainage and sand topdressing into re-used topsoil as well as a cricket square renovation.

Both Foxhills Golf Club and Torquay Golf Club had short game areas constructed, consisting of earthworks, green and bunker construction, drainage, irrigation, cultivating and seeding. A specialist irrigation project took place at Abridge Golf Club with a Perott irrigation system being installed. This involved new mainlines pipework and the installation of a controller into the pump station for the irrigation to greens, approaches, tees and partial fairways.

These projects have been joined by hybrid pitch constructions using two different systems. Brighton and Hove Albion FC had their fibrelastic pitch removed at the AMEX Stadium and had the levels graded before a new sand and rootzone layer was added and a SISGRASS hybrid system installed.

The Premier League club also installed SISGRASS on two and a half pitches at their training ground, with the construction including the addition of new undersoil heating on the goalkeeping area and work on pitch surrounds. 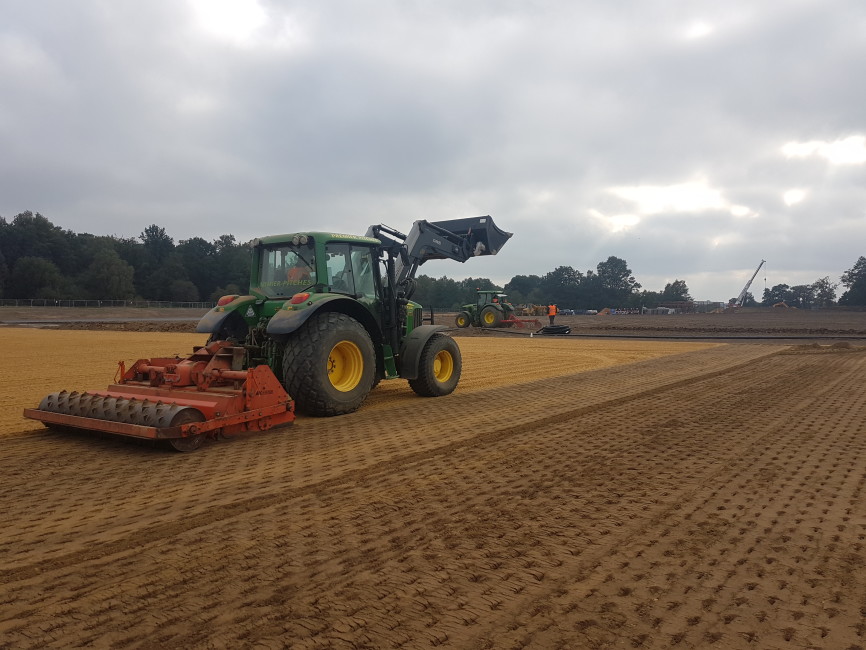 The increasingly popular hybrid system was also installed at Bearwood Park, the new training base of Championship team, Reading FC, along with a fibre sand pitch, fibre sand goalkeeping area and six topsoil based pitches. This work generally included cut and fill earthwork and trimming, gravel drainage layers, lower sand and upper rootzone levels plus the addition of full drainage and irrigation systems and the installation of camera ducting to each pitch.

Rugby has also been an important sport for MJ Abbott this year with a pitch construction project to facilitate a HERO hybrid mat system at Gloucester Rugby's Kingsholm Stadium, which was laid by County Turf. This involved removing vegetation, cutting and filling existing pitch levels, installing new primary and secondary drainage and adding a new rootzone layer.

A renovation project at Paris Saint-Germain's training ground had the MJ Abbott team making their now regular trip to the French capital whilst projects at Newcastle United FC and Chelsea FC continued MJ Abbott's continued relationship with both clubs.

All of these projects are only a selection of examples that MJ Abbott completed in 2018 and a number of key staff who worked at these venues will be representing the company on stand B102 at Saltex. They will be available to give help and advice on projects across every contracting discipline.