Laid out in a beautiful piece of heathland on the northern boundary of Southampton, Stoneham Golf Club has always presented a good challenge to all standards of golfers. Phil Helmn met with Course Manager Matt Plested to find out about the extensive renovation programme which has earned them finalists' positions for Golf Environmental Awards in 2017 and Project of the year in 2022. 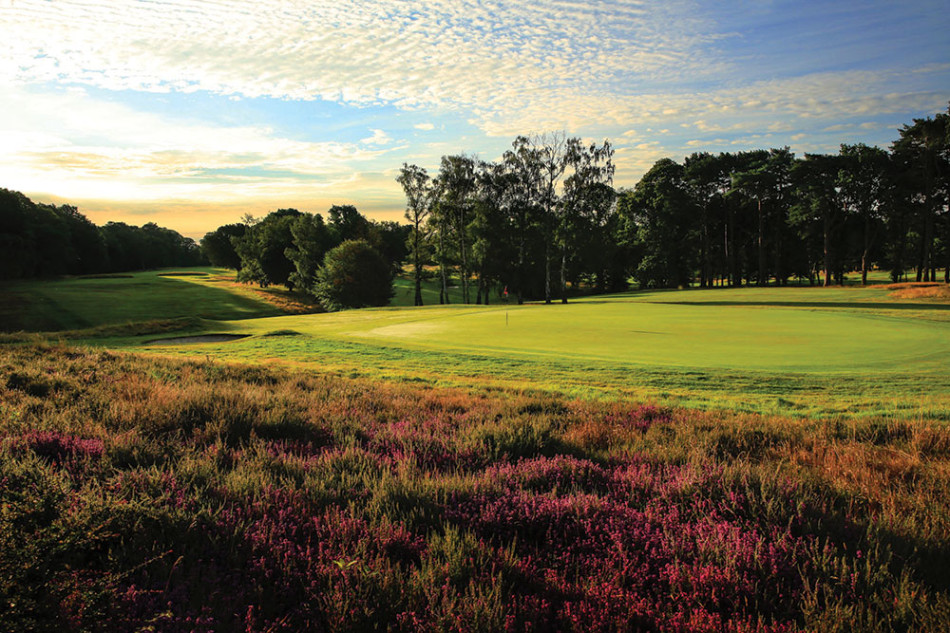 The undulations on the course mean that players rarely get a flat lie, and small (perfectly manicured) greens mean that their short game will get a good test if their approach shots are a little wayward.

The Club was established back in 1908 in an old deer park and Willie Park Junior, designer of Sunningdale Old Course, created a wonderful course in the undulating heath and parkland. Although it is short by today's championship standards at 6400 yards, it is not a course that will be over-powered and brain rewards golfers more than brawn. The rises and falls of the land are so beautifully dramatic with several blind or semi-blind drives, but they only add to the enjoyment, as is so often the case on well-designed courses. As I walked the course with Matt, I couldn't help commenting that in much the same way when you visit a top-notch restaurant and order a succulent steak with all the trimmings, the visual impact as the plate is placed in front of you makes your taste buds begin watering, every hole at Stoneham has the same effect! I just wanted to pick up a set of clubs and tee off! No surprise then, when I tell you, that in the last seven years Stoneham Golf Club has risen thirty-four places in the Top 100 golf course rankings!

Matt is rightly proud of his personal achievements which include tournament support at Walton Heath G.C. (U.S.Open qualifier 2006-13), Old Ford Manor G.C. (The Open qualifiers 2006-10), Kingsbarns G.C. (Dunhill Cup 2002 and 2003) and finally Wentworth G.C. (Volvo/BMW Masters 2002 and 2014). Matt was also selected to join the Bernhards/BIGGA delegation in 2006 which took him to Atlanta U.S.A. In the past, Matt has been heavily involved in supporting our association and has had roles as regional chairperson (London section), board member (Southeast section) and has been involved in the assistant greenkeeper training programme as well as contributing as a mentor on The Future Turf Managers Initiative programme. 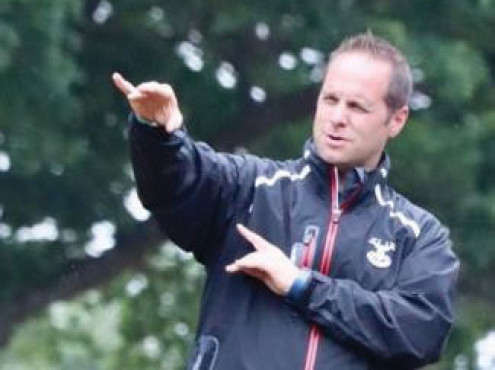 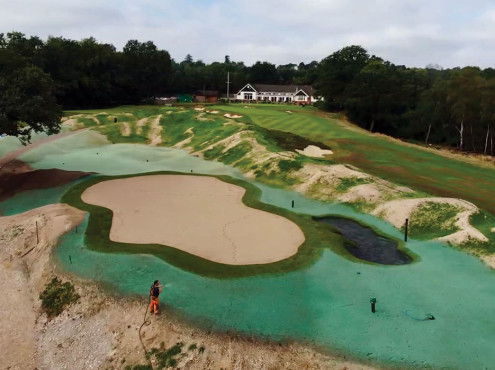 Matt's journey on his way to Stoneham began back in 1996 as an assistant greenkeeper at Lee on Solent G.C. until he moved in 2000 to Hendon Golf Club to take up the position of first assistant for five years, before moving to Old Ford Manor Golf Club as deputy for a short term. In 2007, the call came to move to Muswell Hill Golf Club as their course manager before the lure of Stoneham in 2015. Of course, during his strong career path, Matt gained his level one, two and three National Vocational Awards as well as being invited to become a regional judge on The Toro Student Greenkeeper of the Year competition. He has been particularly proud that two of his young team members made the final of the same competition in 2018.

Before visiting Matt for our interview, we had met a year ago whilst attending a BIGGA regional conference where we were both to speak on our respective subjects, and had previously bumped into him at other educational events. So, I already knew he was a particularly driven and well-versed golf course manager with a leadership style and emphasis on 'getting the job done.' However, I felt compelled that I had to find out for myself (and report to you all) exactly how driven he and his team were. So here we go…. Since joining Stoneham G.C. Matt and his team have embarked on what I can only described as a monumental renovation programme, which has earned them finalists' positions for Golf Environmental Awards in 2017 and Project of the year in 2022.

These projects would make the head spin of many a greenkeeper (certainly mine) and as I catalogue their achievements, I'm sure you will agree that their workload is impressive and their new, revised course ranking is justifiable.

Conversion of an old material storage building which was previously used as a set of topdressing bays. The conversion gave the staff much needed operational facilities. The area now consists of an office for Matt and his deputy, a substantial (and very well equipped) dining area and kitchen. Adjacent to the entrance there are toilets, showers, locker facility and a drying room.

The machinery fleet is impressive. Stoneham embarked on a rolling five-year Toro deal which sees the replacement of all cutting equipment. Matt explained that large investments by the club, year on year, will help to enhance the fleet for years to come.

A major woodland management project was undertaken at the beginning of Matt's tenure at the club. Tree removal is always slightly controversial, but when left unmanaged, trees are can cause problems with light and air movement.

Matt explained that without the tree management plan in place the rest of the golf course would have suffered. Of course, one of the fundamental issues with extensive tree cover, apart from creating poor turf health, is that more trees equate to more leaf fall which makes it almost impossible to sustain good heather growth. 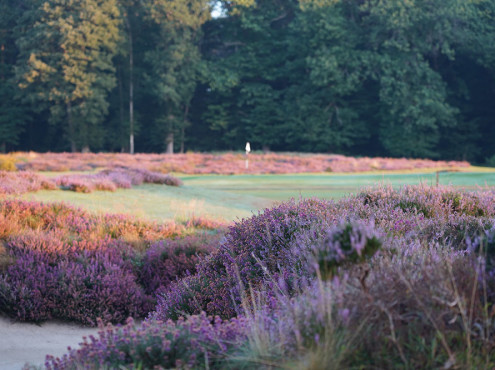 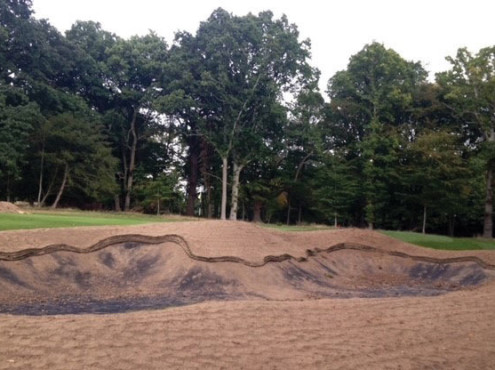 Matt and his team have embarked on an extensive heather regeneration programme at Stoneham. Large 'swathes' of heather have been re-introduced to carries, bunker faces and woodland edges, so much so that the course is almost unrecognisable from that of seven years ago. Indeed, as previously mentioned, this extensive work earned the team the recognition of a place in the final of the 'Outstanding Environmental project of the year award' in 2017.

Rebuilding fifty-nine bunkers on the golf course was a particular project Matt enjoyed. "Working with Ken Moodie's Master plan with the help of Murray Long at my side was exciting," described Matt. "We used many of the old course photos from the club's original handbook which highlighted a mix of heather clad and grass edged bunkers in a typical Willie Park Jnr design, which brought the 'feel' of the course back to life," explained Matt. All bunkers were constructed using 'Bunker Blinder' to help with the previous poor drainage issues. "All the bunkers are now fully drained and don't give us any real problems," said Matt.

One green is traditionally perforated piped drained and there are a further fifteen greens roped drained with the help of DJuke contractors completing the work for the team. "Rope drainage is amazing," explained Matt. "It's quick to install and extremely quick to establish. Minimum disruption with maximum effect! Our last two greens should be completed in October later this year," added Matt.

New wetland area created on the 18th hole to add an area of ecology to the course. This also acts as a holding pond for the drainage off the new academy area. 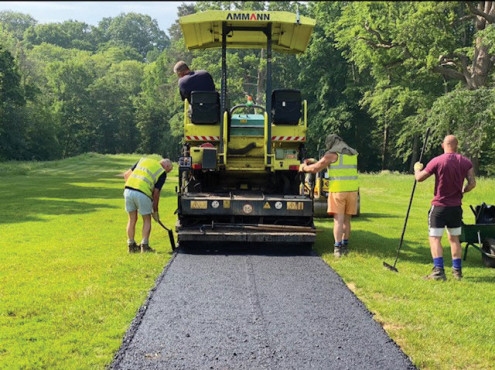 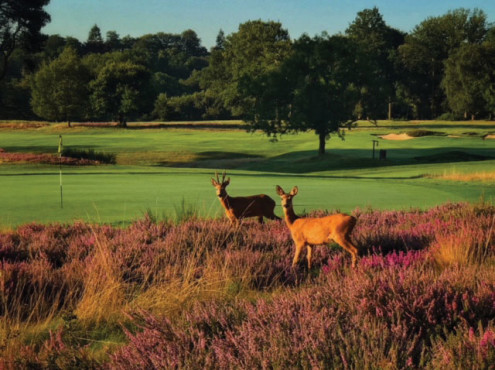 Right: The Club was established in an old deer park

A new prefabricated halfway house and resin coated outside patio seating area constructed behind the 10th green complete with diner, toilets and kitchen area. Matt explained, "This meant getting power and water from the clubhouse five hundred metres through the golf course, which wasn't easy." Matt went on, "The existing pathways had to be rebuilt afterwards and trees on the 1.1km route had to be lifted to 14ft."

Brand new Toro Lynx irrigation system is due to be completed by end of March 2022. It includes eight hundred heads servicing greens, tees, fairways and back to back heads on the aprons, bunkers, turf nursey and all walkways. A mix of Infinity 55's, 35's, T7's and T5's heads have been used all told. Matt explained, "Making sure we had enough water was obviously important, so we installed a six hundred and sixty cubic metre tank, latest pump sets and a brand-new pump house to cope with demand." Matt went on, "M.J.Abbotts have conducted the installation and I have to say what a fantastic job they have done. First class as usual!"

Course signage has been transformed using old, recycled wood made from trees felled on site.

New tees have been constructed on holes eighteen and four to date as part of the range project. I was informed that more are on the way!

The short game area has a blinder bunker, the design concept to recreate every shot which you may need to master when out on the golf course. There are indoor and outdoor bays, two grass tees, Trackman technology and state of the art indoor golf, including the best digital golf courses from around the world including Stoneham G.C. on the system, so the members can play their own course if they wish. The teaching studio is both indoor and outdoor and has all the latest technology for club fitting and swing management plus a putting studio. "We spent over one hundred thousand pounds on tree planting around the new site including twelve-metre-high pines being brought in for instant impact," said Matt. "Heather has been lifted from the site along with heather purchased via Tillers to add to the banks of the range to add age. England Golf, Hampshire golf are now using the facility to train their teams," Matt explained proudly.

So, as they say, "that's it folks," or is it? Well, no not really! Matt and the club have even more ambitious plans for the future. Among some of the planned projects are creating a thirty-two thousand cubic metre reservoir, extending the greenkeepers maintenance facility to hold more equipment, extensive drainage to the wetter parts of the course and creating new gender-neutral teeing areas.

I did say, at the beginning of this article that you'd be impressed. Well, I certainly was, and I'd like to take this opportunity to thank Matt and his team for their hospitality, congratulate them on all their achievements to date and wish them all the luck and success in their future projects. Well done guys - top work!