by Neville Johnson
in Cricket and People
on 29 Nov 2021

High scoring partnerships often as not win cricket matches. Experience, fitness and dedication to the cause count for everything. Neville Johnson went to one of the country's oldest clubs in Kent to meet two of its stalwarts who voluntarily look after its famous ground and boast an age partnership of 166. 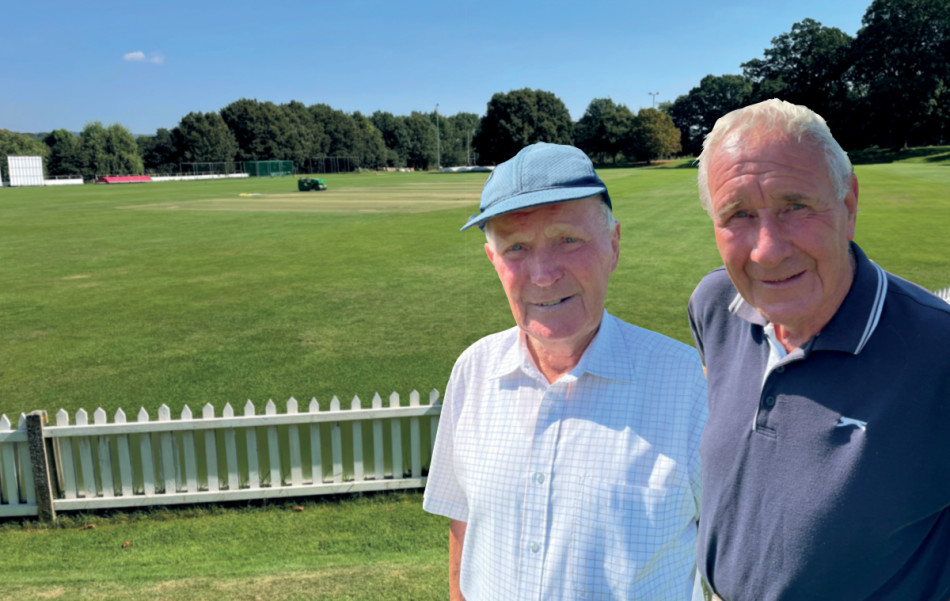 It is often said that players make the best umpires. The same is surely true of cricket groundsmen. Malcolm Bristow, 86, and Micky Back, 80, were both distinguished players. They have an enthusiasm for the game and a passion about the care of pitches that shines through in the way they work and the way they talk about all things cricket.

It is days before the last weekend of matches at the Mote Club ground and the two of them stride back to the pavilion for a chat like run hungry batsmen at a tea-break itching to get back to the middle. It is most definitely a partnership, but Micky, the younger man, is the head groundsman. So says Malcolm.

Looking at this beautifully shaped ground, with its amphitheatre-like grass banking along one side, it's easy to imagine how, for decades, it hosted many a first class game for Kent, notably its early July annual Cricket Festival, always the height of the Mote Club's season. The ground has been owned by the Mote Cricket Club since 1929 when it passed as a gift in trust from the Second Viscount Bearsted, whose father built the club's pavilion and Tabernacle private pavilion and was himself a player.

Micky began playing for the Mote club aged 20 in 1961 after playing for his village club at West Farleigh and helping to look after its pitch since 14. As a player he was always noted for his bowling of slow accurate sliders and wielding a hefty bat. He 'takes strike' first in the pavilion shade on a gloriously hot and sunny September morning.

"I've got a lot out of this club, and I would like to put something back into it," he said. 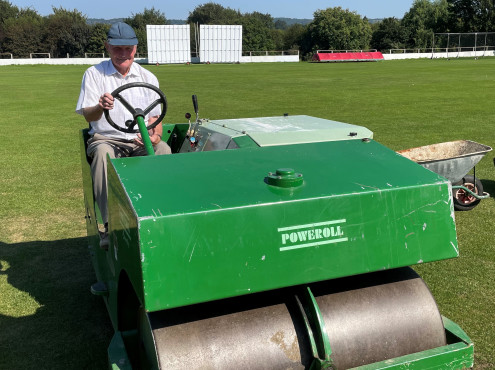 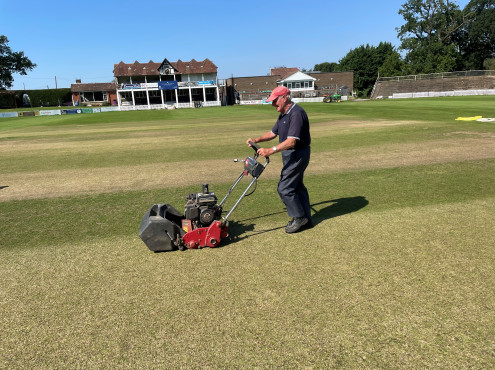 "It was as a lad at the West Farleigh club I got a liking for preparing and maintaining pitches. I actually became a car mechanic and had my own garage business before I moved into sports grass work, first as a greenkeeper at Wrotham Golf Club, then on the grounds team at Reeds Aylesford Paper Mills a few miles from Maidstone where I learned a lot about caring for summer and winter pitches."

"After I retired from professional grounds work, I helped with the upkeep here when I was still a player."

"I can't deny it, care of cricket pitches is a passion and love of mine. Three years ago I came back voluntarily to look after Mote's pitches after a contractor, which had been looking after them for a number of seasons, ceased to do so. It's hard work, but I love it. Best of all my old teammate Malcolm has come back here, I say to lend a hand, but it's a lot more than that. Everyone knows in his day he was pretty well the best cricket groundsman in the south of England. Five ECB outground awards will tell you just how good he was - and still is. You have to remember that this was based on marks given by visiting umpires and opposing captains too."

Malcolm was the groundsman at the Mote for thirty-eight years until 2000. Although he was then sixty-five, a number of those running the club at the time oddly felt that people talked about Malcolm Bristow rather than the ground he'd made such a top-class playing venue. On his birthday in late August he was 'retired' from his position. Now, at the age of eighty-six, he is back there to assist his old friend and team mate. He has much to tell as a former player and full-time professional groundsman.

"I joined Kent's playing staff at sixteen alongside the likes of Kent legends Arthur Fagg and Godfrey Evans and my weekly wage in old money was two pounds, thirteen shillings and four pence," said Malcolm. 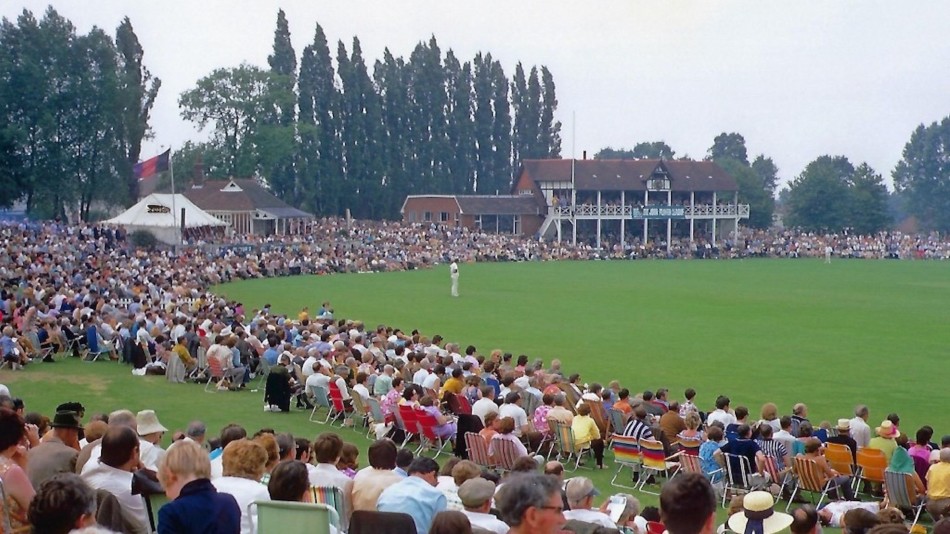 Heady days, when crowds flocked to the Mote for Festival Week

"I'd already been taken on by the Mote club as a player after succeeding in a trial, but for eight years I was reckoned good enough for county level."

He recalls the time when young pros like him weren't allowed to change in the same dressing room as established 'gentlemen' players. Your background played a huge part in your chances of making it in the game, even in the post war years. Malcolm played regularly for Kent's second XI, but he never made the main county side.

At the age of twenty-four he wasn't retained by Kent - he calls it the sack - and he had no idea what to turn to for a living. Senior Kent player Colin Page suggested he get himself familiar with groundsmanship skills and this might allow him to pursue a playing career at minor county level. He already had a coaching certificate under his belt and this appealed to Malcolm. Groundsman coach sounded a pretty good idea.

In those days being a contract county cricketer meant that, in the winter, most had to find another job. Page had a winter job at Reid's Aylesford Paper Mills and said he would have a word with the head groundsman there to see if he'd take Malcolm on as a trainee.

This worked and he got a position on the groundstaff but, because there were twenty-six established groundsmen, there was little prospect of promotion. He did however spend a couple of enjoyable years there learning the skills until the offer of a full time job as groundsman, with regular pay and sickness benefits, at another paper firm at Tovil on the outskirts of Maidstone persuaded him to give up the idea of playing minor county cricket. 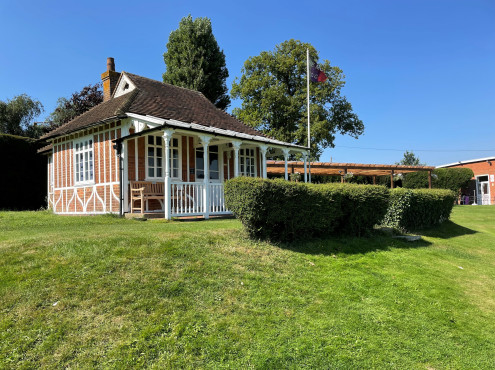 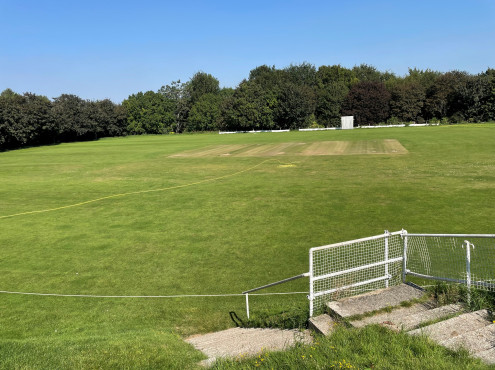 The Tabernacle, built in 1910 and one of cricket's quirkiest architectural features / Mote's lower ground used for junior and mid-week games

A few years later, in 1962, another Kent contact Alan Dixon tipped Malcolm off that the job of groundsman at the Mote club was going. He applied, was successful, and came to the ground towards the end of November of that year.

"The square had obviously been neglected, and I had to refurbish it somehow. It was too late to re-seed, so I decided to re-turf the bare areas. What I didn't know was that we were about to get the worst winter the country had ever experienced, so I was extra glad that I had earlier warned the club not to expect too much that following season."

Malcolm must have produced excellent pitches from the word go and gone on doing so year after year. Nearly four decades in charge of a county outground and a hat full of awards to boot is a fine career achievement.

"The thirty-eight years I spent at the Mote as player and groundsman were the best years of my life," said Malcolm.

All told, there are forty strips on the Mote's main and lower pitches and getting on for 180 matches will have been played there this season. That's a heck of a lot of preparation and repair work.

"There was a time when I thought it wasn't so much a club as a place where people came to play cricket," said Micky.

"I reckon that nowadays though there is a real spirit on and off the field at the Mote. Everybody chips in and helps with all the jobs that need doing, which is great for us two."

It would be true to say that the ground has seen better cricketing days. Not so long ago the Mote club was one of the best in the south-east. In 1973, with Micky and Malcolm in the side, they made it to the National Club knock-out final at Lord's, where they were beaten by Wolverhampton CC. Now, its first team is holding its own in the second tier of the Kent League, but with eight senior sides, plus junior and girls teams playing regularly, things are on the up and there are plans to add to training and artificial netting facilities and, in the coming years, to build a new pavilion.

Micky and Malcolm watch matches at the Mote with as much enthusiasm as ever - the ex-player/groundsman link at its most effective. They say it gives them valuable knowledge about how strips are playing. No one would argue with that.

In the eighteen months or so that they have been back together out in the middle, the two of them have probably saved the club something like £50,000, which apart from their value as seasoned groundsmen is excellent for club business and its future ambitions.

There is hope that one day Kent will return to the Mote to play. Three times this year Kent's ladies teams have played there, so the tie is not broken.

This part of the county has been starved of first class cricket since 2005 when a wicket tumbling championship game between Kent and Gloucestershire here, said to have been caused by over-watering of the pitch, brought about an ECB reprimand and a points deduction. Henceforth, Kent dropped the Maidstone ground from its list of venues. It was a shattering blow to the Mote club. 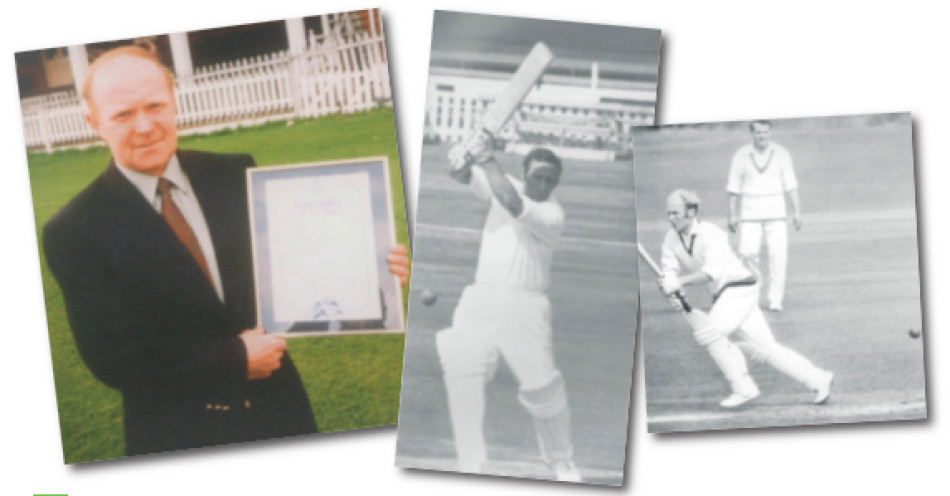 Left to right: Malcolm with his 1993 ECB Groundsman of the Year award; Micky on strike at the 1973 Lords final; Malcolm cracks a four for Mote firsts against Dartford CC in the early 70s

That, albeit significant, blemish apart, the Mote has a wonderful record of cricketing feats. A decade before losing its outground status during the 1995 season, on strips prepared by Malcolm, Mark Ealham hit an eye-watering 44-ball century in a Sunday League match and, in a Festival Week championship match, the late Graham Cowdrey and Kent's then overseas player Avarinda De Silva clocked a remarkable 368 run stand. Both of these still stand as records today.

A cricketing legend in most people's book, Colin Cowdrey, who in his day captained both Kent and England, confided in Malcolm after a day's play during Festival Week that the Mote was his favourite ground, second only to Lord's. It always provided a fair surface for skills with both bat and ball he told him. Praise indeed.

There are no inherent problems with the ground. It drains well and, this season, Micky and Malcolm say only one game was off and cancellations are always to do with the weather, not the state of the pitch.

They hope that, for next season, they will persuade the club not to play matches on either Monday of Friday to allow more time to work on strips for midweek and weekend games.

"Availability of time on the square is key to decent preparation," said Micky.

"You can't prepare when games are in progress, it's as simple as that."

Slightly controversially, the two of them feel that the standard of club pitches generally has fallen in recent times. They put this down to the falling number of top quality club-attached groundsmen. Their contention is contractors do a decent enough job, but they have other interests to attend to and don't have the passion for the job a club man will generally have, assuming he's a decent pro with good equipment.

The Mote club is lucky. In Micky and Malcolm they have passion in spade-fulls. Cricket began at the Mote 164 years ago, a couple less than the partnership tally of these two remarkable cricketing groundsmen.