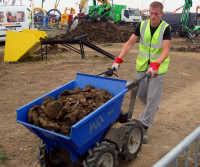 With the economy as it is, no wonder attendance was down at the recent SED show.

Due to the poor attendance of exhibitors, stands were moved around and Muck-truck found themselves relocated just 100m from the main pavilion right in the middle of the show.

This proved a huge boost to the number of enquiries for the Muck-truck especially as they were launching their new Max Dumper, a new model providing greater weight carrying capacity than the market leading standard unit, which was also on display.

An upbeat Terry Rowlands, Muck-truck's Managing Director, commented on their show, 'It was a terrific boost for us being situated where we were. Every visitor had to pass by the Muck-truck display at least once and this was reflected in a phenomenal increase in enquiries and indeed sales. The new Max Dumper caused a huge amount of interest and we took orders for them at a ratio of 4-1 on the standard dumper truck.

Proves to me staying with the SED show during these poor economic times was the right thing to do.'

Designed in the UK for British conditions the Muck-truck is powered by the reliable and easy-starting Honda GXV160 5.5hp engine and has a ¼ tonne payload with a 6cu ft (220 litre) hopper.

Also on show was the new Max Dumper truck, a new model providing 33% greater weight carrying capacity than the standard unit but maintaining the
compact features that give the Muck-truck such useful manoeuvrability and ability to pass through a standard doorway.

Alternatively, on both models the hopper can be removed in seconds to be replaced with a flat bed capable of carrying up to120 bricks. The flat bed also allows awkward heavy loads such as bags of cement, rolls of turf and slabs to be moved without the risk of injury.

Built to a high specification the Muck-truck has three forward speeds and reverse, plus four-wheel drive.