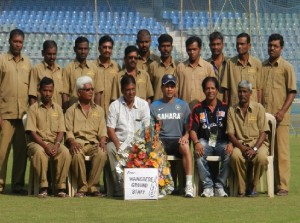 A year from now, Lalsuram Jaiswal and Vijay Tambe, the longest serving pair of groundsmen at the Wankhede Stadium, will retire.

Walk around the ground and it's not hard to spot these two maalis, both in their 60th year, with a mop of snow-white hair, dressed in khaki. In their 30-plus years of service, the duo has seen some of the finest cricketers that Mumbai, India and international teams have had to offer. And then they have seen the finest: Sachin Tendulkar.

Jaiswal, the oldest serving groundsman working for the Mumbai Cricket Association (MCA), has a twinkle in his eye as he recalls his very first memories of Tendulkar, as a kid and then as a youngster making his way into the Ranji Trophy team. It was at the Wankhede that Tendulkar played his maiden first-class match and though Jaiswal's memories do not always match the facts, they are vivid enough for you to get the picture.

Where he and Tambe do not go wrong is in recollecting Tendulkar's wishes for preparing the training pitches at the Wankhede and MCA's Bandra Kurla Complex grounds (BKC).

"He would always be open about his needs," Jaiswal says. "If he needed a hard pitch he would ask for one. Sometimes if the pitch behaved differently and the ball deviated sharply, he would ask to firm the surface."

Just like his approach to batting, Tendulkar has always been simple in his preparation, according to Jaiswal. "Woh humko pakata nahin tha (he would not trouble us by asking too much)," Jaiswal says. "If the surface was loose he would say make it hard. And if the pitch was too hard he would ask us to water it. Next day, he would come and say it was good. Unlike some others who would always keep saying things about the pitch, he never was fussy."

Tendulkar's team-mates have pointed out how precise and methodical he is during his training sessions but Jaiswal and Tamble, and other MCA groundsmen, have also seen him train when no one else is around. Like Ramesh Mhamunkar, the co-curator at Wankhede, who has seen Tendulkar train alone during the rainy season at BKC's indoor nets.

See the rest of the article on the following link:-http://www.espncricinfo.com/sachinfarewell/content/story/688031.html