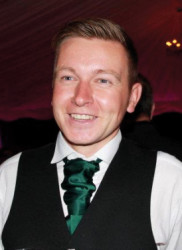 Nairn Dunbar Golf Links is a traditional links course set in the north Of Scotland just fifteen miles from Inverness on the Moray Firth coastline. The club was founded in 1899 and has hosted many prestigious events over the years, such as The Scottish Strokeplay Championship, The Senior Mens Home internationals, The British Seniors Amateur Championship, Scottish Boys and Girls Strokeplay Championships and the World One Armed Championships. The course is set in 135 acres of undulating linksland and has over 600 playing members

Richard Johnstone, who was appointed Course Manager at the Nairn Dunbar Golf Links in early 2016, has introduced a rough management programme and has set his sights on restoring the links roughs to their natural condition.

He began his greenkeeping career at Nairn Dunbar and has completed a considerable list of greenkeeping qualifications since joining the club straight from school in 2000. His hard work and determination to succeed within the industry is evident, and he is enthusiastic about his new role and the potential of the links going forward.

The 117 year old traditional links course will host the 91st Boys Amateur Championship in 2017 and sits alongside some of the best links courses in Scotland, with visitors travelling from all over the globe to experience the challenges it presents.

However, that challenge was becoming too demanding where the native roughs had become so thick with a mixture of pasture grasses, such as ryegrass and Yorkshire fog, that a rough management plan had to be put in place. In the early years at Nairn Dunbar, the control of the undesirable grass species were taken care of by grazing sheep but, as the game developed, the mowing of those roughs became the standard using modern machinery.

As golf became more popular, the methods of mowing, fertilising and watering all changed dramatically and this affected the grass species on the links. The game's popularity meant more intensive mowing of the links roughs, making the course more playable, and it was presented in a manicured condition.

Whilst the maintained rough was important in growing the game during those years, it also contributed to the loss of the natural links look of wispy golden fescues blowing in the wind. This ultimately resulted in excessively dense roughs in which it was impossible to find balls, reducing the playability and enjoyment for the average golfer. By returning the links roughs to their natural condition, it will allow the fescues to regenerate to a dominant position again, leaving a long, open and whispy ecological rough. This should, in turn, give the course an instant aesthetic effect, but allow members and visitors to find their balls and help speed up play. Richard explains further. 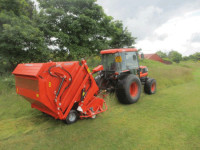 "The incredibly wet conditions last summer encouraged excessive coarse grass growth and prevented mowing, which resulted in difficult conditions, not just on our course but on many golf courses throughout the UK. It is now our intention to implement an integrated management programme, combining a mixture of cultural and chemical treatments, to remove the ryegrass and Yorkshire fog from the unmaintained roughs throughout the course.

We will be addressing the problem by deploying cultural practises such as mowing with the removal of grass, deep scarifying to help reduce the grass canopy density, no artificial fertilisation or watering, allowing natural regeneration of fescues by reducing competition from the coarser pasture grasses and overseeding with fescues to encourage re-establishment.

These processes will become more straightforward with the addition of two Wiedenmann machines to our fleet - the Super 500 Flail Mower and the Terra Rake 2.3m. The Super 500 has the capability to complete three essential processes in one operation (cutting, scarifying and the collection of arisings). It has a rotating flail head that creates a strong vacuum. Initially, the rough is cut by the flail, the vacuum created then throws the material into the collection hopper and, when the hopper is full, the material is taken to our onsite storage area to be stockpiled and composted. 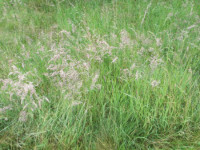 By flail mowing and scarifying the roughs using the Super 500, it will help to reduce its density and allow the natural regeneration of fescues by reducing the competition from coarser pasture grasses. The removal of plant material will gradually deplete the store of nutrients in our soils. So, by removing sufficient nutrients from our soil profile, the broad-leaved species will decline and allow the opportunistic fine leaved grasses to colonise.

Some roughs may revert from a thick undesirable sward into a thin, wispy sward in a matter of months, whilst others may take several years. The Super 500 is an exceptionally versatile machine, which can work at speed and has great manoeuvrability. The ability to carry out actions such as flail mowing, collecting, verti-cutting and scarifying make this a truly multi-tasking machine. The main purpose of the machine was its flail mowing and harvesting capabilities, but its principal duties will switch to scarification and grooming of fairways and roughs as we progress. 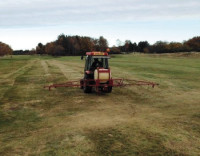 Whilst traditional cultural practises have helped with managing our unmaintained roughs, that alone will not be sufficient to eradicate all the ryegrass and Yorkshire fog from these areas. We have combined the cultural practices with an autumn application of selective herbicide to eradicate the unwanted grasses. The first application was made in the autumn and will be followed up again in spring. The use of this herbicide to kill the coarser grasses provides us with another management tool to restore roughs to a links texture within a realistic time frame.

The Terra Rake has been an essential tool on all the treated areas to remove the dead grass, leaving the finer fescues in place. This has also opened the grass canopy at soil level to allow existing fescues to grow without competition from the coarse grasses. The machine can work at high speeds, floating right over our natural undulations without damaging them, whilst pulling out the thatch. The small greenkeeping team of five in total have found a variety of other duties for it, which means its versatility will be in use throughout the year. 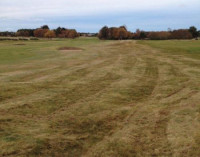 Our windows for the management of our roughs are in early spring and early autumn, which effectively avoids the bird breeding season and allows wildflowers to set seed before cutting. Breeding birds are protected under the wildlife and Countryside Act 1981 and should not be disturbed. The rough management plan will support invertebrate communities and help provide food resources for insectivorous birds. From an ecological point of view, it will also help us create areas of rough with much greater biodiversity which, in turn, will enhance our golf course in line with our sustainability action plan.

We have also introduced a gorse and tree management plan and the aim is to return areas of the course back to its original dune landscape, with the removal of gorse, broom and other non-native species. Gorse removal will allow native and protected species such as the Burnet Rose, Marram Grass and Sand Sedge to re-establish, provide sun basking areas for the common lizard and create a more open aspect to the dune systems.

Where the gorse will be removed, it will be left bare and will look rather unsightly where the ground underneath has seen very little light for decades. However, its removal will provide a far more interesting and varied landscape for all to enjoy.

This dune landscape is important to the future wellbeing of the course as it provides a more diverse habitat for plants, grasses, insects, birds, reptiles and animals to prosper. The encroachment of gorse and broom has been allowed to take more of a foothold than is desirable, but this is going to be continually addressed on an annual basis. The effects of the removal of gorse may, at times, seem a little radical but we hope the continuing results of the regeneration will be very worthwhile in the long term.

After consultation with our golf course architect, sports turf research institute, course manager and greens committee, we have updated the plans for the next five year period in order for us to meet our aims and key objectives, such as improving the course appearance, playability, interest, drainage and safety. The remit is to 'further enhance the character of the course and to adopt best practice to improve course maintenance'."

Nairn Dunbar Golf Links is a prime example of how a combination of proactive management and minimal inputs can lead to a course that is visually attractive, providing a tough test of golf, but also offering a diverse habitat for a variety of wildlife.