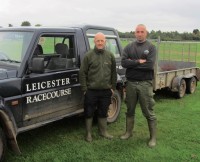 "Because a lot of the meetings are Monday or Tuesday, there's a lot of weekend overtime too. It takes a special kind of person to work at Leicester!"

With thirty-two race days a year, almost all of which are one day meetings, Jimmy Stevenson and his team at Leicester Racecourse have their work cut out.

"The workload is constant year-round, and we have to fit jobs such as building jumps in when we can," he explains. "It's quite tough on the groundsmen and, because a lot of the meetings are Monday or Tuesday, there's a lot of weekend overtime too. It takes a special kind of person to work at Leicester!"

The hurdle and jumps tracks share ground with the flat track, and cross it to get to the bends, so a lot of time is spent repairing the crossing points. And, at the end of the winter jumps season, there is just three weeks to prepare for the flat.

"We are always planning ahead, thinking about the demands of future fixtures," Jimmy explains. 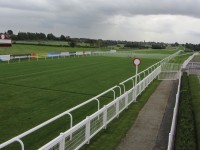 But, all the forward planning in the world was to no avail this summer, when in Leicester's busiest period, 325mm (13in) of rain fell in July and August.

"We lost five meetings in the summer, after losing two in the spring to waterlogging and one in the winter to frost," Jimmy comments. "The course is on clay soil and there was nothing we could do - the rain just kept coming."

However, it would appear that the rainfall was a freak event - in the whole of 2011 just 457mm (18in) of rain fell on Leicester racecourse, which is more accustomed to drying winds and severe cold snaps. Not one meeting was lost last year.

"There is no additional action that we could take, other than hoping it doesn't happen again," Jimmy comments. "The course has been comprehensively drained over the last five years, but no drainage system could cope with that amount of continuous rain, and we couldn't get machinery onto the course to try and get the water away."

However, the turf has recovered well, helped by intensive verti-draining by contractor Worth Draining, and a good healthy ground cover is in place for the winter jumps season.

"We have also purchased a deep aerator of our own - a Wiedenmann Terra Spike XP - so that we can tackle the problem areas ourselves," Jimmy explains.
The team at Leicester undertake most groundcare tasks, including specialist operations such as spraying, in-house, to give them the flexibility needed for the busy programme.

Techniques and equipment are, therefore, specialised to make the most of the available labour - Clerk of the Course and Estate Manager Jimmy is supported b 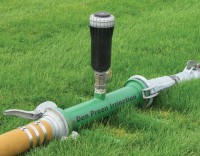 A good example is the irrigation system, which recently received a £100,000 upgrade with new Hunter sprinklers and the addition of splitters to allow watering of specific areas of the track. The pop-up system supports a Briggs reel and boom.

"The pop-ups are very fast, and we can put some water on in the morning of a race meeting, or top up to combat evapotranspiration. The sprinklers are also ideal for watering in after fertiliser applications," explains Jimmy.

James Jukes adds: "The Briggs boom is good, but this type of system is labour intensive - used in combination with the sprinklers I can water the track on my own, without having to bring other staff in at a weekend, for example." 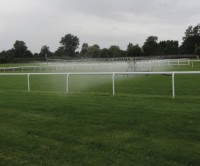 Water comes from a brook running through the course, via a dam and well, and Leicester has an extraction licence for 10 million gallons/yr.

The steeplechase course is unusual in that it has never been irrigated since its inception in 1882, but maintains strong, healthy turf cover year round.

"The root structure is amazing," comments Jimmy. "We don't race over fences until later in the year, when there is adequate moisture, so there is no need to irrigate."

One of the major issues for Jimmy and his team is the restricted width of the racing surface, which makes it hard to provide fresh ground. An impressive project - again completed mainly with the racecourse's own labour - is the creation of a new bend on the far side of the course.

"We took topsoil from the side of the course and banked it up to widen the racing surface on the bend, and I'm delighted with the way that it has established ready for racing this winter. It should improve the camber of the bend and make more room for the hurdle track." Mowing is a constant process throughout the year, with three cuts a week in the summer taking up to five hours at a time. A Votex front mount deck with a blower on the back of the Deutz Agroplus tractor, shod on Alliance flotations is the outfit of choice.

"With just sixty racecourses in Britain, manufacturers do not make equipment specifically for racing surfaces, so we have to adapt agricultural or golf course machinery for our needs. But the front mount rotary mower and blower works well, without the added cost or labour requirement of gangs," says Jimmy.

As well as the Deutz, a John Deere compact and lawn tractor provide the horsepower, and the latest tyre technology is used to minimise any compaction on the course.

Equipment is kept in tip-top condition in a new workshop complex, which has plenty of storage space, a jumps building area and facilities for the groundstaff. A clever idea is the provision of large covered bunkers for divot mix and other materials, which allow lorries to tip directly into them.

"It makes sense to protect expensive materials from the elements - we don't want to be handling wet soil when repairing the course."

Given the tight time window to bring the course back, James needs plenty of help on and after race days, with teams of up to eighteen casuals treading in divots and applying a 50/50 Boughton Loam Divot mix with MM60 seed.

"Depending on the going, it can take two days to get the course back after a meeting. Anything softer than good to firm can mean that there is a lot of damage to address," he comments.

Frost covers are used to protect shaded areas in severe weather, and Jimmy reckons that they paid for themselves in two years.

"They will save a meeting in the first or second frost but, most importantly, they take the doubt out of the decision," Jimmy says. "It's always going to be an issue here, as we race right through the winter."

The frost sheets also double up as germination sheets when the crossing areas are reseeded each March in preparation for the flat season.

"Again we use MM60 perennial ryegrass. I've used it for the eighteen years that I have been at Leicester, and I find that the cultivars just get better at germinating in the cold. The grass is up in six or seven days," comments Jimmy.

Cancelled meetings can mean financial hardship for racecourses - especially when they are privately owned - but Jimmy is upbeat.

"The Board is very supportive, they know that getting the course right is the most important aspect," he reflects. "We are all keen to look to the future, rather than the short term, and build on the developments and progress that have been made here at Leicester."

A few days after Pitchcare visited, Jimmy and his team were once again battling monsoon conditions as the last September meeting dawned to 38mm of rain. Never a dull moment! 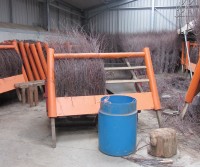 Birch coppiced from the 200 acre estate, in which the racecourse sits, is used to build the national hunt fences after being collected, graded and stored for a year.

With a covered store, fence building is one of the more attractive jobs on a cold, wet winter's day, and the process starts in September ready for the season ahead.

Although Leicester Racecourse is a private, and relatively secure site, two portable fences, with metal rather than wooden frames are used on the more vulnerable parts of the course, and only put in situ when the darker evenings discourage trespassers!
Staffing sorted

Jimmy has a young grounds team, and recruits mainly from the local Brooksby College.

"I ask the lecturer for his best students when we have a vacancy!" he explains. "We aim to give young groundsmen a chance to have a go at everything, with lots of variety and responsibility to keep them interested. Jake Croft, who is 23, has prepared all the flower beds this year and the hospitality areas look superb for owners and trainers or for a wedding."

He adds that the workload at Leicester makes for a tough job, which requires the groundsmen to be fit and keen, so it is not for the faint hearted!

Jimmy's own workload is also diverse - as Estate Manager he is responsible for the whole of the 200 acres on which the course is situated. At the centre and to one side of the course, Oadby Golf Course sits dormant, after Oadby and Wigston Borough Council closed it earlier this year in the face of mounting losses, and there are also substantial areas of woodland to care for.