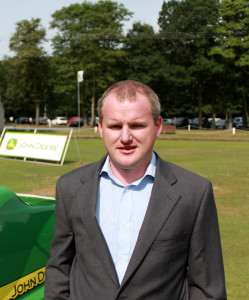 Brian D'Arcy has been appointed strategic account manager for turf and other non-agricultural equipment at John Deere Limited. He replaces Paul Trowman, who has recently taken up a new role within Deere & Company's tactical marketing group in Region 2 (Europe, CIS, North Africa and the Near & Middle East).

Based at the company's Langar, Nottingham headquarters, Brian's role includes representing John Deere to key strategic accounts throughout the UK and Ireland, developing new and maintaining existing relationships with these customers and ensuring support from the company's nationwide dealer network.

After joining John Deere Limited at Langar as a demonstrator in 2007, Brian D'Arcy was promoted to product sales specialist in 2008, then territory manager for Wales and the West Midlands in July 2009. "Brian's customer and dealer experience gained over the past five years on territory will serve as a good foundation for his new position," says turf division sales manager Chris Meacock.