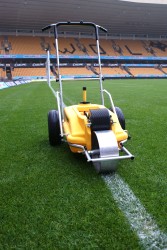 As a well established Grounds Maintenance Contractor ( the business has been going since 1993) caring for over 100 schools and local authority playing fields in the rural counties of Somerset and Dorset, his company is one of the biggest users of Supaturf Briteliner line marking paint, which his 'lads' have been employing from the day it was first produced.

"It suits our market," he says. "We're working in a rural area looking after primary schools and the lads have to do everything. Spray marking would be too complicated and time consuming. Transfer wheel line marking works for us, and the lads prefer Briteliner marking paint although they've tried other products, which are two or three times the price."

Regarding the new Briteliner Arrow transfer wheel line marker, Dave is surprised that no one has designed a similar machine before now. "Line marking machines don't seem to have changed since the year dot," he says. "They were all steel and aluminium with a heavy cast iron centre wheel. This new machine is designed to keep the transfer wheel under pressure so the machine doesn't need to be so heavy. The new Briteliner Arrow is lighter, more efficient and easier to use and because you can tip the tank it looks as though we'll be able to save a bit of product."

Dave's team does about 45 to 50 hours line marking a week, which means that over a year they should save quite a substantial amount of money.

Mike King, Sales and Marketing Manager for Vitax says that since the launch in November, the new Briteliner Arrow has received a very positive response. "The reaction of Somerset Landscapes to the Arrow is typical," he says. "The new machine has attracted interest from every level in the industry right up to major stadia in both the UK and overseas."