New Club Car vehicle set to get people on the road 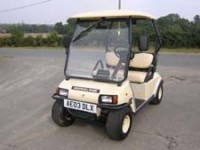 The Run-A-Bout was developed in the US by Club Car's parent company Ingersoll Rand via a joint venture with General Motors. The background to the project is that new US legislation required all car manufacturers to offer an electric vehicle as part of their product portfolio. General Motors introduced the EV1 in response, which was a commercial failure.

Club Car were made aware of the difficulties General Motors faced and proposed to manufacture a variant of the market leading golf car the Electric IQ. The cars were successfully tested by General Motors in California and New York states, where more than 10,000 cars were supplied to households.

The Run-A-Bout is an NEV or Neighbourhood Electric vehicle. It is capable of travelling at up to 21 mph and a range of up to 33 miles on a single overnight charge. The car has all of the necessary features required for a road vehicle, including; 3 point inertia reel seat belts, 4 wheel brakes, indicators, headlights, windscreen wipers, horn and rear view mirrors. Additional safety features such as a safety-glass windscreen and tip-over frame have been introduced to make sure the vehicle meets the stringent demands of the DVLA.

The car has on-board storage for anything from golf bags to shopping. A cargo version is planned for release in 2004. Weather protection kits are also available to cope with wintry weather in Northern Europe!

The Run-A-Bout will be aimed at a wide range of customers, primarily in urban areas. Target customers will include Local Authorities looking to provide a low cost environmentally friendly park and ride vehicle, rental companies and private individuals who wish to use the car for personal transport or golfers who want to drive to their club, use the car on the golf course and drive home again.

Robert Drewery, Marketing Director of Club Car Europe is delighted by initial reactions to this unique vehicle, "the reaction we have had to the Run-A-Bout since it was first shown at the SALTEX exhibition in Windsor earlier this year is startling. We have already had interest in the vehicle from various different industries, as well as the general public, as it is a cheap cost effective alternative to traditional transport solutions. The Run-A-Bout is an important addition to the Club Car portfolio and we expect sales to reflect this."

The "Run-A-Bout" has been successfully introduced across the world with cars currently running in various locations, including Hamilton Island resort in Australia, where normal road vehicles are not suitable. The Run-A-Bout will be available fully registered for delivery from December at £3,995 + VAT exc. delivery and license fees.