Rain certainly does not stop play at one of Northern Ireland's oldest cricket clubs, as Chris McCullough found out when he visited the Carrickfergus Cricket Club in County Antrim to talk to Head Groundsman Michael Kennedy and the team that help with the ground preparations. 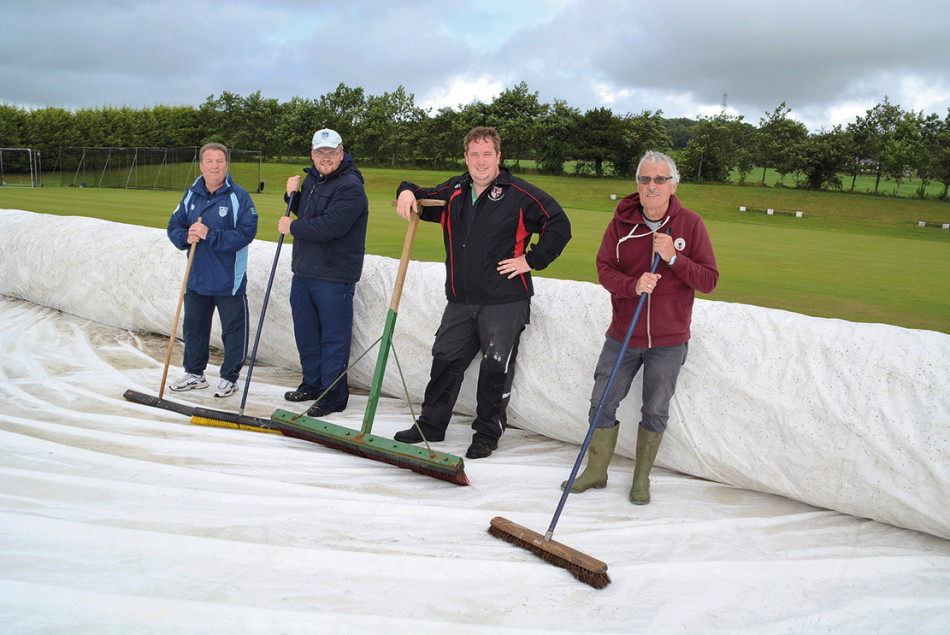 It's been a hectic season for the members of Carrickfergus Cricket Club in Northern Ireland, who have not only battled hard in the league, but also with the weather.

Sitting very close to the historic town of Carrickfergus on the country's east coast, the County Antrim club enjoys a healthy membership of over 200, seventy of whom are player members.

The grounds have been well utilised by the members over the years as the club enjoys good success in the league. Just recently, the first XI team moved back into the top half of the Premier League after their first away win of the season.

Steeped in history, Carrickfergus Cricket Club dates back to 1868 and was one of the founder member clubs of the Northern Cricket Union in 1887.

Due to the passion and determination of current members, it remains one of the oldest surviving clubs in both Northern Ireland and the Republic of Ireland.

Although the grounds are impressive at Carrickfergus Cricket Club these days, it hasn't all been plain sailing for the club over the years.

Despite its long documented existence, the club has endured somewhat of a difficult history and led a nomadic existence for over a century as it had no home to call its own. But, thanks to the efforts of a passionate and visionary committee in the mid-1980s, the full potential of Carrickfergus Cricket Club started to reveal itself.

When the committee drew up 'a sound, aggressive business and development plan', the current clubhouse and grounds were opened in 1988.

Encouraged by that opening, the committee embarked on further development plans, and funds soon became available to build a two storey extension to the pavilion that was actually opened by famous West Indies cricketer Sir Garfield Sobers. 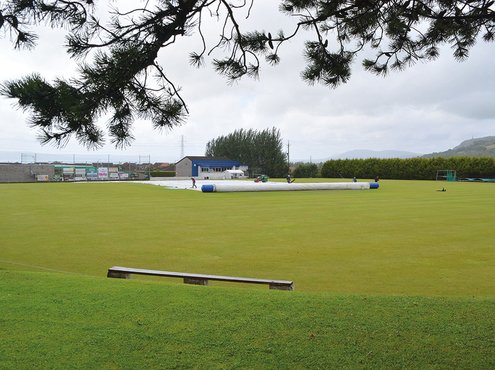 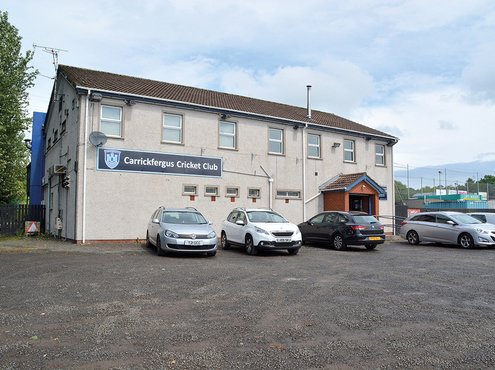 And it didn't end there as the grounds received an overhaul with improved drainage, a pitch extension and a top quality double-berth practice installation to cap it off in the last fifteen years.

As the club membership grew, funds totalling £250,000, including a boost from a loan, became available to modernise and enlarge the lounge bar and kitchen, on top of improvements to the changing facilities and provision of storage for ground maintenance equipment.

Nowadays, the club enjoys operating from its expanded base and grounds that extend to around almost four acres in size. Within the site there are ten wickets, one artificial playing surface and two practice areas.

Looking after the grounds is a real team effort but, at the helm, is grounds convener Gary Thompson and head groundsman Michael Kennedy.

Gary freely admits Leslie "taught me everything I needed to know about looking after the grounds, and then some."

A banker by day, Gary has enjoyed his role, but insists it's a real team effort when looking after the grounds, as was discovered during recent preparations for a hectic weekend of matches amid very undesirable weather. 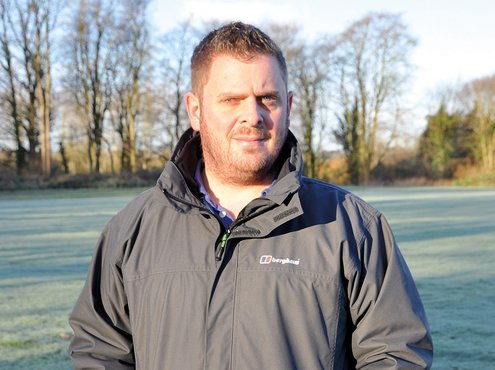 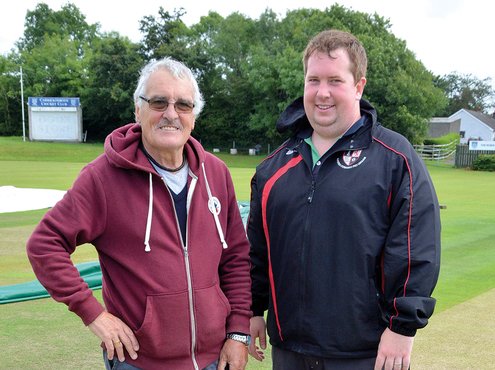 Gary said: "I am indeed a banker and a former cricket player with twenty years in the sport. I really enjoy the role of grounds convener. Michael looks after the grounds on a more dedicated level, but it is a real team effort here to have the wickets looking as best we can."

"I am in charge of the budgets here for looking after the grounds, including all the maintenance and machinery costings, reporting to the committee, of course."

"We have a good selection of machinery including self-propelled and walk behind mowers, all of which are in fairly decent condition. The Kubota tractor is over fifteen years old and runs the aerator on a regular basis. Plus we have an old reconditioned road roller which we stripped down and fixed up."

"When the club was nomadic, we played our games at other clubs in the nearby Ballyclare and Belfast areas; really anywhere we could get a free place to play at. Thankfully, the club is a lot more settled now and is excelling with its own facilities and superb grounds."

The soil at Carrickfergus is heavy and slow draining, hence the need for aerating the pitch once per week.

Gary's uncle Leslie said: "It is indeed heavy soil underneath, which prompted us to undergo a new drainage programme some years ago by placing nine inch drains every four feet across the grounds to help increase the water flow from the soil in times of heavy rain."

"If the playing schedule gets really heavy, then we aerate the grounds once a week just to keep the air flowing through the soil structure. On top of that, we hire an outside contractor to come in twice per year to verti-drain the grounds too."

"The grounds are mostly used by our own cricket teams, which include youth, women's and senior teams. However, in the past, some of the local schools have come here to play as well," he said.

Presentation of the field ranks extremely high with the passionate groundcare crew. "It's all about the weather," said Leslie. "If we get the good weather, then we can present our grounds to the best of our ability. We know our wickets give every game an excellent playing surface; the best in the country," he offered. 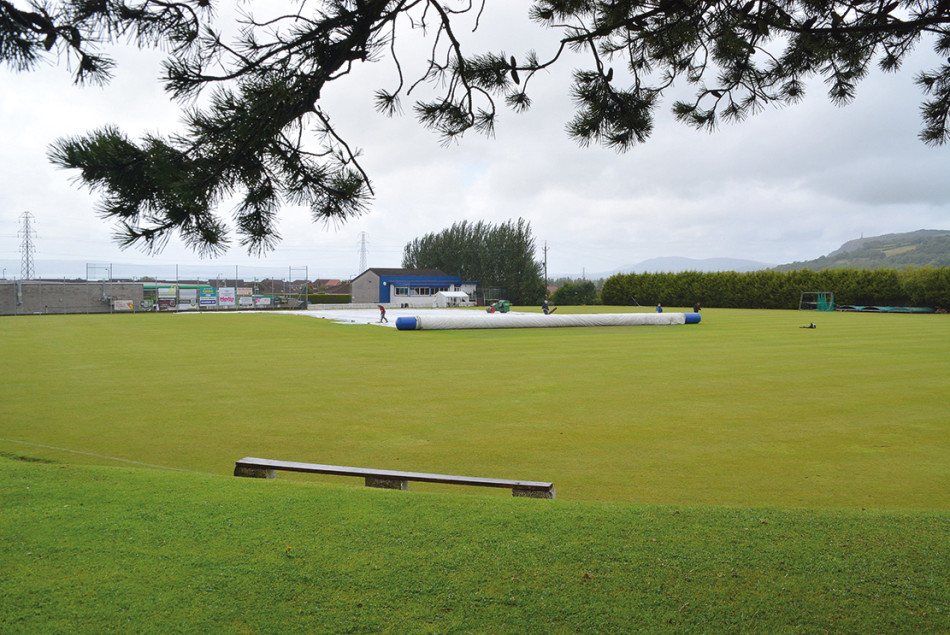 The maintenance schedule is fairly similar to that practised at most clubs, but the attention to detail helps the club stand out.

The outfield is cut twice a week and maintained at around 10mm, whilst the square is usually kept around 8mm and taken down to 4mm on match days.

Head Groundsman Michael Kennedy outlined the end of season work on the grounds. He said: "September 2016 was my first end of season renovation and there was quite a bit of thatch in the profile. The ground used to be known as one that has good batting pitches, but this had become a little 'tennis ball' in bounce, so there needed to be some extra work planned."

"Also, previously the pitch had been overseeded with Limagrain MM29, so the square had fescue and bent grass, something I wanted to get rid of."

"After receiving some advice from Andy Mackay at Sussex, the decision was taken to burn off the entire square, a job not for the faint hearted! So, a few days later, it was sprayed with glyphosate; something that had not been attempted on a premier league cricket square in Northern Ireland."

"The square was then cut to as low as the mower would go, and heavily scarified with a Sisis 600 in several directions. It was brushed and mowed in between passes. Then it was seeded with Limagrain MM50, and topdressed with Super Surrey Loam from Binders. The levels were again checked and dragmatted."

"What followed can only be best described as episodes of blind panic, with lots of questions being asked by members and fellow groundsmen."

"The theory of what I had done stacked up but, until I saw germination, it was a nervous few weeks. Thankfully, nine weeks after renovation there was a superb coverage, which is exactly what we wanted," said Michael.

Michael takes regular soil samples to keep a close eye on the soil structure and its requirements. With warmer winters being experienced across Northern Ireland, it can affect the maintenance programme. "Winters seem to be milder, so there is less soil heave, meaning more need to aerate the square during the winter." 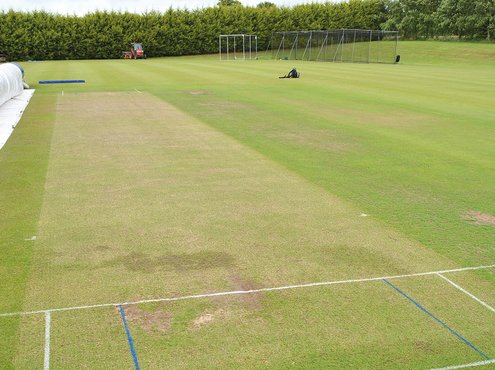 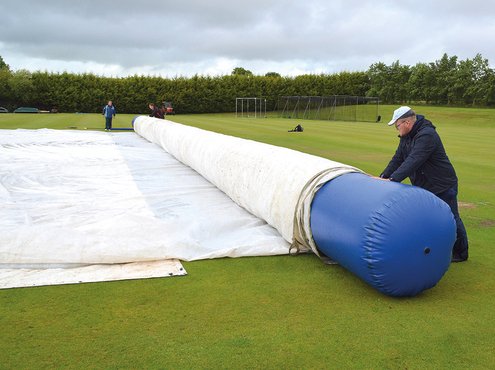 "The square gets what it needs. The club has been very easy to work with. If I need something and it can be justified, it has been approved. In the future, I would like to get the square fraise mown or, ideally, koroed," he added.

The committee made a major investment in April this year when the members agreed to purchase a new cover from Cunningham Covers, measuring 60m by 30m that covers all the wickets.

This cover, which just two people can roll out or in, thanks to an inflatable tube, is thought to be the largest of its kind working on a cricket ground in Ireland. It has proven to be an essential piece of equipment recently.

Prior to a busy weekend of games in late July, the skies opened and the rain poured down for a few days, which was not ideal timing. Thankfully, Gary and the team had rolled out the cover just in time to save the square from a drenching, but the hard work came after that in preparation for the games.

Gary said: "We got the covers down on the Tuesday prior to the games being played on Friday, Saturday and Sunday. They were rolled back on one of the dry evenings to allow air circulation and light to penetrate the grass."

"The covers were, thankfully, put back as, on Friday morning, there was another downpour. It did eventually stop and four of us started brushing the surplus water off the cover. Gradually, we removed the cover once again to let the air and light back in. Prior to the game, we cut the square and rolled it to achieve the best playing surface for the games," he said.

Michael agreed that the cover has been an essential piece of equipment and a worthwhile investment for the club. "The inflatable tube and large sheet cover has been a huge success. It saved the club's first ever interprovincial match between the NCU and Munster on 21st July. Without it, the match would have been lost to the heavy rain during the week leading up. The ability to keep the entire square dry has been a huge benefit." 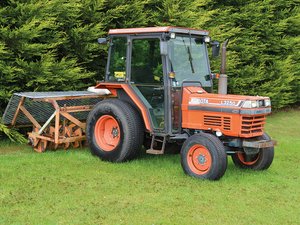 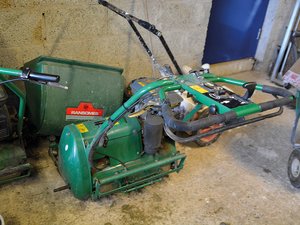 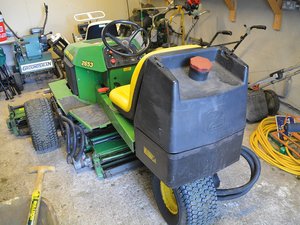 The purchase of machinery is generally second-hand from a local dealer. Michael says the Sisis Combirake has been a great addition to the machinery shed, but that they hire in a heavy roller for pre-season rolling. "We have a good selection of machinery here but, if I had a wish list, it would include a tractor mounted aerator, and a cassette type mower would be nice to have, as well as a ballastable roller."

"But, if I have any more equipment, then I would need a bigger garage, and more people to use them!"

When considering the state of the industry, Michael wasn't shy in making his true feelings known. "Cricket groundsmen in Ireland are a dying breed," he said. "Very few, if any, young people are taking this work on. It is mostly left to volunteers and retired people to maintain the sports grounds. Thankfully, at Carrickfergus, we are highly regarded and not undervalued but, in general, I would say the industry needs a higher profile."

"The awarding of Test cricket to Ireland will hopefully shine a light onto the work we groundsmen do," he concluded.