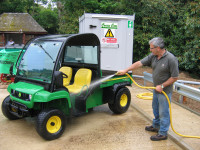 The Environment Agency (EA) introduced new enforcement powers in autumn 2010. Highspeed Group's MD, David Mears, asks; "Are you aware of this and, more importantly, sure that you are complying with the law?"

Under the new Environment Agency Civil Sanctions Regulations, all waste producing, managing or carrying businesses will be affected. The new regulations will, effectively, give the EA the powers to apply certain sanctions without having to resort to prosecution. There are six types of civil sanctions:

Compliance Notice - a regulator's written notice requiring actions to comply with the law, or to return to compliance, within a specified period.

Restoration Notice - a regulator's written notice requiring steps to be taken, within a stated period, to restore harm caused by non-compliance, so far as possible.

Fixed Monetary Penalty - a low level fine, fixed by legislation, that the regulator may impose for a specified minor offence.

Enforcement Undertaking - an offer, formally accepted by the regulator, to take steps that would make amends for non-compliance and its effects.

Variable Monetary Penalty - a proportionate monetary penalty which the regulator may impose for a more serious offence.

The EA state that they will start using Civil Sanction powers from December 2010, initially in the hazardous waste, water resources, and packaging waste sectors. The first two are of concern to golf clubs. In essence, Waste Management and Pollution Prevention is high on the agenda again.

To ensure that your club does not run foul of regulations, and is fully compliant, the following is suggested:

Install a proper washdown area for golf machinery to prevent pollution from contaminated wash water entering the groundwater. The best option is to install a biological washpad water recycling system, as these are considered "future-proof" and, of course, save precious water.

Ensure that your fuel tanks are properly bunded, and that spill kits are in place to cope with any re-fuelling spillages. Gravity feed tanks (and certainly not single skin ones) should not be used, as contents can be discharged to ground if valves were to be broken off.

Place all oil containers on a sump pallet so that spills can be contained.

Entrust your waste management to a properly licensed company who produce consignment notes and can provide "audit trails". In other words, do you know where your waste is going, and how?

Remember, you are responsible too if your waste ends up in the wrong place. Look at what the EA say: We can take enforcement action against people that fly tip or dump waste, which can result in a fine of up to £50,000. We will prosecute anyone who gives their waste to a person who is not registered with us as a waste carrier. You should expect professional companies to operate their own liveried vehicles, employ trained and certificated operatives and provide properly labelled waste containers.

Don't allow containers of waste catering oil to build up, they attract vermin. Your waste management company will remove these for you.

Do make sure that your dispose of WEEE (Waste Electrical and Electronic Equipment) properly and through your waste management company. (The first WEEE prosecution was made in January 2010). 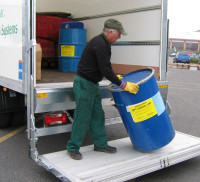 Now is the time to "get it right", as it is clear from recent publicity that the EA and SEPA are increasing operations. To emphasise this, prosecutions are listed on their websites. Below are recent appropriate examples:

Kathleen Miles, the operator of Diamond Skip Hire, Leicester pleaded guilty to one charge of not having the appropriate waste transfer notes. She was found guilty of two further charges of dumping and keeping waste without an environmental permit or exemption. Fines and costs were £1,190

DS Holdings Ltd., trading as Envirogreen - a waste carrier and its director, Neil Stewart, of Slough, Berkshire has been ordered to pay over £52,000 by Bracknell Magistrates' Court after virtually wiping out all the fish living in a tributary of the River Thames.

Anthony Small of South Devon has been ordered to pay £13,500 in fines, after pleading guilty to storing more than 700 tonnes of controlled waste at Ruby Farm, contrary to Regulation 41 (1)(a) of the Environmental Permitting Regulations.

The foregoing clearly demonstrates that the offensive is on! Pleading ignorance would be no defence if prosecuted, so act now.